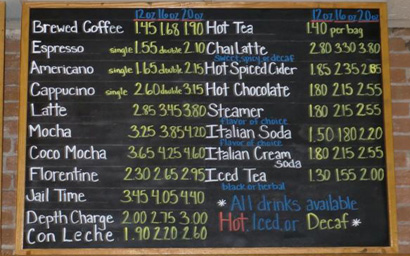 The Pankow district of Berlin is always a good place to spot informative graffiti, but my most recent sighting on WolankstraÃe takes the biscuit. Freiheit ist Terror! it read. It is a peculiarly German turn of phrase that verges on the untranslatable. Suffice to say that Freiheit means freedom.

Consumers also are terrorised by freedom of choice. Wandering jet-lagged and desperate for an injection of caffeine some years ago on New York’s Upper East Side, I vividly recall being brought quite close to the brink by the presentation of a fourteenth so-called choice when trying to buy a cup of coffee.

“What kind of milk would you like with that, ma’am?” demanded my barista.

I gawped. He smiled menacingly. “Cow’s milk?” I ventured.

The tyranny of choice has since spread eastwards from the city that never sleeps. Across Europe, people march into cafés ready to machine-gun the barista with the precise details of their preferred hot beverage: a grande decaf soya latte with cinnamon sprinkles and extra bubbles, puh-lease.

But this is not choice. This is the illusion of choice. True choice is being able to get a decent coffee served in a cup, not a bucket, in an agreeable café. This choice, increasingly, is not there.

People who grew up in former East Germany see all this more clearly than the rest of us, I believe, because they had a different socialisation. Thus, the friend I was visiting in Pankow remembers meeting a friend in West Berlin a couple of days after the Wall came down. “How are you finding it?” he asked.

My Pankower friend still often walks out of his local supermarket without buying anything because he can’t decide what to buy. “Before I couldn’t choose and now I still can’t choose,” he says.

Investors, who are also consumers, face the same tyranny of choice as my Pankower friend in his option-infested supermarket. In fact, fund investors in Europe face a rampaging dictatorship of variety – 35,000 funds, according to a recent report from Lipper, entitled Beating the Benchmark.

It is hard to choose between them because their performance is often nothing to write home about. Over the past ten years, the average annual proportion of equity funds that out-performed their benchmarks was 42.8%.

You could argue that a year is too short to judge a fund and that investors, particularly equity investors, should be in for the long-term. But things aren’t much better then. Over ten years, 39.7% of equity funds outperformed their benchmarks and 17.4% of fixed income funds.

And there is something else. Even if investors are in for the long-term, the funds they invest in might not be. As Ed Moission, Lipper’s head of UK and cross-border research, puts it: “Investors in Europe cannot escape the fact that fund closures and launches are a significant feature of the industry landscape and that this may impact on the funds in which they choose to invest.”

For the past ten years, 3,400 funds have been launched every year in Europe on average, according to Lipper, and 2,400 have been closed or merged. That’s not choice. That is madness.

I know what choice my friend in Pankow would make.