Close ties between the UK and Ireland were re-asserted when Irish Funds rolled into London in November.

The importance of maintaining alignment between the UK and EU’s regulatory frameworks was a core theme at the Irish Funds Annual UK Symposium, Irish Funds said.

Jonathan Lipkin, director of policy, strategy and innovation at UK trade body The Investment Association, said: “Relations between the UK-Ireland industries have been an integral part of the delivery chain and is stronger than ever.”

The delegation of fund management activities was covered in the Update on Regulation panel. Lipkin took part in the panel and said the UK’s regulatory decision-making apparatus is treating delegation with “importance”.

Delegation refers to certain fund management activities, such as fund administration, being carried out in countries other than where a fund is domiciled and sometimes to third parties. The topic in recent years has centred on portfolio management amid concerns that the EU would require the activity to be carried out in major fund domiciles such as Ireland and Luxembourg and away from financial centres such as London and Frankfurt.

The UK’s departure from the EU intensified the topic, particularly for UK-based asset managers.

All panellists – which included Federico Cupelli, deputy director of regulatory policy at the European Fund and Asset Management Association - agreed that regardless of differences, delegation should be an intrinsic aspect between jurisdictions.

Regulatory change in general is imminent, the symposium heard, because the UK is no longer a part of a single market, and Lipkin highlighted a rise in the potential for cross-border friction.

“There is deepening of some consumer-focused manufacturing and distribution requirements initially reflected in the assessment of value (AoV), and eventually in Consumer Duty expected to come into force next year,” said Lipkin.

AoV refers to a requirement in the UK for funds to produce proof of their value to investors. But Lipkin urged stakeholders to “take a close look” at the Financial Conduct Authority (FCA) Consumer Duty, which is expected to set higher and clearer standards of consumer protection across financial services and requires firms to put their customers’ needs first. Lipkin said this would entail a series of responsibilities to be undertaken by the entire funds ecosystem - distributors, platforms, advisers, wealth managers - with respect to price and value.

“Regardless of where you get to with the overseas fund regime and make decisions about assessment of value for manufacturers, there will be a set of requirements in place for distributors that is likely to impact domestic and overseas fund managers,” said Lipkin.

Delegation challenge
Divergence is never far from discussions on regulation. Tara Newbery, of Northern Trust Asset Management, said for firms such as Northern Trust that are UK-based but with Irish clients in Ucits-regulated funds, to look at both frameworks in parallel is challenging in terms of resources and costs. 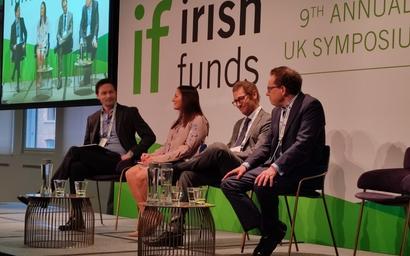 "Considering the differences between SFDR and SDR, we do not know how the Financial Conduct Authority will land in terms of disclosure for other European funds marketed in the UK.”

She questioned how cross-border interaction would work given that the “sustainability bar [is] high in the UK”.

Compared to SDFR’s key feature of transparency in the classification framework, SDR's key features include tracking and labelling.

In a separate address at the conference, Derville Rowland, deputy governor, consumer and investor protection at the Central Bank of Ireland, said it was important for the EU and UK to continue working closely together on regulation to ensure as much as possible the “consistent and stable application of our frameworks”.

As the challenges of the last few years have shown, strengthening our alliances with like-minded partners is more important than ever … We don’t just welcome your continued engagement – we see it as essential to our mission of serving the public interest by maintaining monetary and financial stability while ensuring that the financial system operates in the best interests of consumers, investors and the wider economy.”

Liquidity consensus
A further topic in the regulation panel was liquidity, with Lipkin emphasising the need for consensus between regulators on liquidity tools. He said there should be reflection on this following the recent liability-driven investment crisis in the UK, which took place after a recent Budget.

Efama’s Cupelli added: “Concerns these days are condensing on loan funds. We are also closely waiting for the ink to run dry on the European Long-Term Investment Fund [ELTIF] proposal.” He expressed optimism on co-legislators offering improved regulation to help launch ELTIF products in future.

“Down the pipeline, we will be monitoring money market funds closely. There is a lot of discussion around the retail investor strategy, too,” Cupelli said – and he argued that commission-based and fee-based models should continue to coexist.