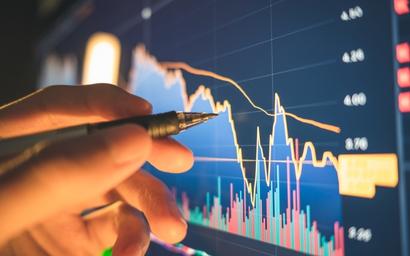 Higher interest rates could be a boon for custody banks. Meanwhile, asset levels have fallen during severe market volatility. By Nick Fitzpatrick.

Volatility in markets, which hit asset managers and their custodians alike this year, has seen assets under custody and administration (AuC&A) levels tumble.

Joe Saliba, deputy chief executive officer at Paris-based custodian Caceis, says: “We noted a marked increase in asset levels across the board throughout 2021 but experienced a subsequent reduction in assets during the first half of 2022 of around 8-10%. The drop in asset levels was principally driven by the financial markets, where we have seen a downward trend in prices of many instruments since the beginning of the year.”

Dale Grieve, HSBC Securities Services’ head of asset owners, business development and client management, Europe, said the firm’s AuA had “increased significantly” in the second half of 2021 but that the combined AuC&A level “dipped” this year. At the end of June, the figure was below the bank’s end-June 2021 figures. 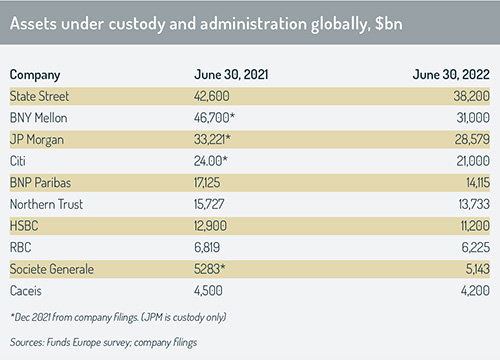 “The reasons for this primarily reflect global lower market values and the impact of a stronger US dollar, which has hit asset levels for nearly all providers”, Grieve said. (See ‘Talking heads’ following  his article.)

State Street – a company seemingly in protracted talks to acquire the investor services business of Brown Brothers Harriman (BBH) – reported in its 2021 annual report that it had reached a record level of AuC&A for the bank, with US$43.7 trillion. But this slid to just over $38 trillion (€39.6 trillion) by June this year.

Like the above banks, JP Morgan reported a good 12 months last year. The bank saw $4.3 billion in revenue in its securities services business and more than $4 trillion in client assets onboarded. A notable business win was a $700 billion share of BlackRock’s exchange-traded funds business.

Standard practice
The outsourcing of custody and fund administration in asset management has been largely a standard practice for three decades. For the financial firms that own the custodians, custody provides a stable annuity-like income. But after almost three decades of relative quiet, the industry has both spoken widely of digital disruption for their asset management clients and had to contend with the same challenge itself.

A number of them see data as – in JP Morgan’s words – a critical enabler for investor clients. Data services have therefore become a differentiator in the securities services business, the bank has said. Digital assets are rapidly becoming a new battleground, too. A year ago, State Street launched State Street Digital and appointed industry veteran Nadine Chakar, formerly of major rival BNY Mellon, to address the industry’s “evolving shift to digital finance”.

The same year, her old bank BNY Mellon formed a digital assets unit to accelerate the development of solutions and capabilities related to digital assets, including cryptocurrencies. The ambition is to build “the industry’s first multi-asset platform that bridges digital asset custody, execution and administration seamlessly with traditional assets”, BNY Mellon said at the time.

Outside of the main US global custodians that dominate custody rankings are the French. BNP Paribas has been snapping at the heels of Citi for many years. Our survey shows the bank still has some $7 trillion to run. The French – namely Caceis, Societe Generale and BNP Paribas – are also stepping up their digital efforts now that the local regulatory environment has, arguably, become clearer.

The future
Custodians and fund administrators chase efficiencies in their own businesses and hope to deliver the same to asset manager clients.

With interest rates rising upwards once again as monetary policy attempts to normalise, theoretically, this will be good for the health of the custodians, whose revenues are related to interest income. But the future may be different. Certainly, there has been a step change in asset management. Might what Clive Bellows, Northern Trust’s head of global fund services, Emea, say of asset management also apply to custody banking in the future?

He tells us: “In the current volatile market environment, there is no longer a direct correlation between rising assets and increasing margins. One of the assumptions that has long underpinned asset management – that an increase in assets leads to an increase in margins – is now being questioned, heightening the need for innovation [and reinforcing the importance of efficiencies and cost controls].”