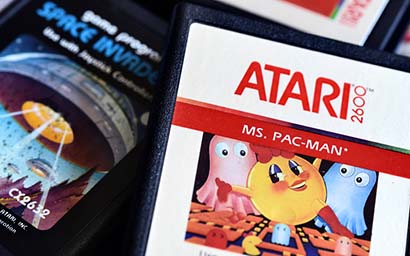 In the past, games were played with sticks and stones; today games have evolved to bits and bytes. Since icons like Atari introduced the first videogames, a multibillion industry has emerged. Philipp Schlegel believes one can enjoy video games not only by playing them, but also by investing in them.

Some readers might recall the arrival of the first video games in the 1970s, such as Pong, Pac-Man and Donkey Kong. Since then, the market has been growing at a mindboggling pace. As can be seen in figure 1, 2018 global revenues from video games were $139bn, up more than 51% compared to 2015. As a comparison, global box office revenue from movies was $41bn last year1.

Will growth continue?
The future is not difficult to predict in hindsight, as the saying goes. Is there still an opportunity? We believe so, due to three drivers for growth:

First we believe there is significant potential from mobile users. As can be seen in figure 2, the bulk of industry growth since 2010 came from the mobile platform. Figure 3 shows that a major underlying driver was increasing video game adoption by mobile users. Mobile growth is not showing any signs of flattening. Technological advances, such as 5G, Virtual Reality and improved computing power will broaden the capabilities of mobile phones, leading us to believe that growth will continue.

We see the emergence of cloud game streaming services, such as Google Stadia, as the second main growth driver. Whereas traditionally, gamers needed powerful, hence expensive equipment to play games, cloud platforms will run the games and stream the end result to the gamer. The gamer only requires a device to watch live video, something which nowadays most developed market consumers have. Additionally, whereas games used to be largely fee-based, cloud services are set to be low-cost, or even free as they can monetise in alternative ways, such as by cross-selling other cloud services. For game developers, cloud services provide an advantage in that they only need to develop for a single platform.

Finally, the arrival of esports. Esports, for those not acquainted with them, are organised multiplayer videogame events that are often streamed and held at live venues. They are at the junction of games, social and digital video consumption.

Watching other people play a video game might not be the first thing many readers would think of as their favorite leisure activity, however among the young generation, it is becoming increasingly popular. As can be seen in figure 4, in 2018 esports events had more unique viewers than many US traditional sporting events. 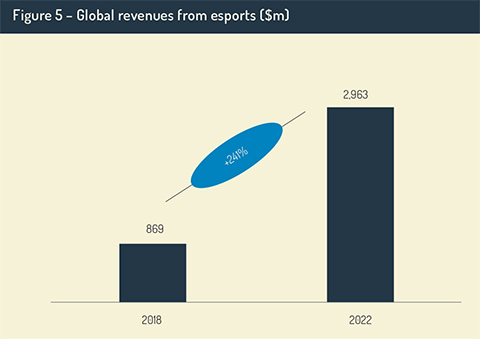 A completely new ecosystem is developing around esports. Videogame producers are launching their own leagues with multimillion-dollar prize purses, teams with loyal fanbases are emerging and some universities are even launching scholarships based on esports results. Esports viewers are young, most of them under 353, making them particularly interesting for advertisers. Even though current revenues from esports are still modest compared to the total pie for video games ($0.9bn in 2018), they are expected to triple during the next 4 years (see figure 5).

Seizing the opportunity
VanEck’s Video Gaming and esports fund strategy is based on the MVIS Global Video Gaming & eSports Index, which has generated a 236% return since 1 January 20154.

VanEck’s strategy offers a number of advantages for investors:

We believe video games and esports are a natural allocation for any investment portfolio. Given human nature, this industry may be around for the long term.

Disclaimer: This publication is for marketing and informational purposes only and does not constitute investment advice or an offer to sell or a solicitation to buy fund units. Investing in the fund entails risks. Further information can be found in the sales prospectus and the key investor information document which are available at www.vaneck.com. Performance data shown relates to the index and not to the fund (“Simulated past performance”). Simulated past performance does not reflect a deduction for fees and expenses of the fund and is not indicative of future results. Please contact your advisor. MVIS® Global Video Gaming and eSports Index is the exclusive property of MVIS Index Solutions GmbH (“MVIS”), a wholly owned subsidiary of Van Eck Associates Corporation, which has contracted with Solactive AG to maintain and calculate the Index. Solactive AG uses its best efforts to ensure that the Index is calculated correctly. Irrespective of its obligations towards MVIS, Solactive AG has no obligation to point out errors in the Index to third parties.