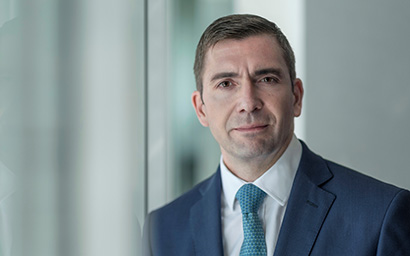 With assets under management (AuM) of more than $6.8 trillion, New York-based BlackRock is the world’s largest asset management firm.

Perhaps less well known is the fact that the company is also the largest fund house in Europe, where it manages around $1.8 trillion (€1.6 trillion) on behalf of European clients.

Michael Gruener, BlackRock’s head of wealth for the Emea region, believes that the energy of “creative destruction” – a term coined by the Austrian economist Joseph Schumpeter – provides one explanation for the firm’s increasing market dominance in Europe and globally.

Schumpeter’s theorem, put forward in 1942, describes the deliberate dismantling of longstanding practices in order to make way for innovation.

Although Schumpeter used the phrase “gale of creative destruction” to describe increases in productivity in manufacturing processes, the theory of the impact of disruptive technology is equally applicable to the financial services industry.

“Schumpeter was talking about a moment in time when things needed to be rethought and how good opportunities can come out of tricky situations,” says Gruener. “Translating this to BlackRock: well yes, we are under pressure now. Our margins are under pressure but so are everyone else’s.

“The more diverse and broader your business model, the larger your scale is – and the more likely you are to come out of it at the end of the tunnel as a winner. We are running $6.8 trillion of assets for our clients globally and nobody has more scale than we do.”

That scale, says Gruener, gives BlackRock a massive advantage over its competitors, allowing it to manufacture its products at more attractive prices than anyone else. “We are able to do that because we are getting the best prices from vendors, be that custodians or whatever,” he says.

“Everything in asset management is about scale. Whether you are running a portfolio of a hundred million dollars or a trillion: if you have the capacity, it doesn’t cost you more. That makes asset management the perfect scale industry and that moment of creative destruction actually positions BlackRock very well.”

The funds industry is, says Gruener, currently caught in a perfect storm, buffeted on all sides by margin compression, technological and regulatory change and an uncertain macro environment. Some of the pressures, such as margin compression and margin pressure, are linked to regulatory developments.

“Regulation is driving transparency, which is a good thing for the end client, but at the moment that everyone understands the market price of something, there is compression of price. Technological change is not necessarily related to that, but it is happening at the same time, which makes this an even more interesting moment in time.”

“Having eFront allows us for the first time to model illiquid private assets in the context of our total portfolio,” says Gruener. “Integrating Aladdin and eFront will allow us to look at our portfolio super-holistically, which will be a world first. Nobody else can do that and all these things differentiate us from our competitors.”

Of BlackRock’s total AuM of $6.8 trillion, roughly a third is in active funds. The bulk of the rest is in index and exchange-traded funds, of which BlackRock is the world’s largest provider, and alternative investment funds.

Despite BlackRock’s reputation as a passive fund giant, the firm’s $1.8 trillion European business is, perhaps surprisingly, predominantly in active funds.

“At its heart, this is a cross-border mutual fund business. In terms of net asset-raising we are the second-most successful provider of liquid alternatives in Europe,” Gruener says.

Nevertheless, the growth in assets in BlackRock’s ETFs is higher – and growing at 12% to 15% a year – compared with average annual growth of 3% to 4% in the firm’s traditional active mutual funds.

Gruener expects that trend to continue, which should lead to the $400 billion in iShares in Europe doubling over the next five years.

Record year
Gruener joined BlackRock in 2012 as managing director and head of iShares for Germany, Austria and Central Eastern Europe. He had previously spent a decade at Goldman Sachs in various distribution roles in Chicago, London and Frankfurt. In 2014, he was promoted to managing director and co-head of iShares for Europe before becoming head of Emea retail in 2017.

Based in BlackRock’s European headquarters in the City of London, he commutes on a weekly basis from his home in Wiesbaden, near Frankfurt.

Last year was a record for BlackRock, which launched no fewer than 27 new active products in Europe and, so far this year, the firm is on track to launch a similar number.

This includes two liquid alt products as well as a range of thematic strategies, such as future transport (which includes investing in electronic cars and battery technology), nutrition, sustainable energy and next-generation technology.

“If you are able to identify a trend which has the potential to change the world and you invest in it early, then you should be able to avoid cycles,” he says. “We are trying to identify transformational, sometimes multigenerational trends and then invest against them.”

He cites the example of a snapshot of New York’s Fifth Avenue in 1900, when an observer might have spotted one car amid hundreds of horse-drawn carts and carriages. “If you had taken a photo from the same spot in 1919, there would probably have been just one horse cart and the rest would have been cars. Anyone who identified the trend in 1900 would have had outsized returns. A similar thing is going to happen with electronic mobility, I think.”

While BlackRock has become synonymous with passive funds, Gruener reveals that just 10% to 12% of client portfolios in Europe are in passive funds, the rest being in active funds. BlackRock offers 260 active products in Europe, and a “similar” number of iShares ETFs.

“Passive indexing is growing faster than active, but the base is still very firmly on the active side,” says Gruener.

On the passive side, BlackRock this year launched six new ESG versions of its ‘Core’ range of ETFs that track some of MSCI’s best-known indices.

Ready for Brexit
On the subject of Brexit preparations, BlackRock has chosen the firm’s Amsterdam office as its contracting entity for clients in continental Europe. While this will mean more oversight and compliance control staff in Amsterdam, he denies that the decision will lead to Amsterdam becoming its de facto headquarters for continental Europe.

“This does not mean that that we are going to be doing less or more in other countries,” he says. “We have large presences in Paris, Frankfurt, Budapest and Madrid as well as manufacturing platforms in Dublin, Luxembourg, Munich and Zurich and this will continue.” London currently accounts for around half of BlackRock’s European workforce of 4,000 and Gruener expects this proportion to remain the same post-Brexit.

Extending the constructive destruction metaphor, he says that Brexit upheaval could bring competitive advantage. “BlackRock and its pan-European operations have an advantage here relative to, say, a singularly focused UK-domiciled manager who has to build all that – whereas we already have it.

“I have structured the sales part of my organisation in preparation for a potential hard Brexit already,” he says.

With separate sales heads for continental European sales and the UK now in place, he says that BlackRock is prepared for a potential hard Brexit “irrespective of the outcome”.

Gruener does not anticipate having to redomicile any funds outside the UK post-Brexit, as most of the firm’s Ucits funds are registered in Luxembourg, while iShares ETFs are predominantly registered in Dublin.

“The uncertainty of Brexit outcomes forces us to do the most prudent thing, which is to plan for the worst. Anything else would not be sensible for investors,” he says. “Whatever happens, from a governance perspective and from a regulatory oversight point of view, BlackRock is as prepared for Brexit as it can be.”