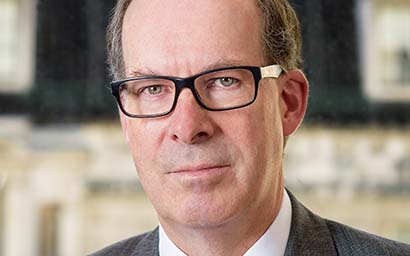 Ten years ago, Joan Payden flew into London in the wake of the Lehman Brothers collapse expressing relief that, in the previous two years when ‘toxic’ derivatives had fallen apart, her firm had refused offers to buy credit default obligations.

Fortunately, the reason for the trip was not to fight fires. It was to celebrate the first decade since the Los Angeles-based asset manager she founded, Payden & Rygel, had begun its international expansion with the creation of Payden & Rygel Global.

It’s now October 2018. Another decade has passed since the start of the crisis and Joan Payden (pictured, p20) was back in London recently to mark the global business’s 20th anniversary.

Throughout that time, running Payden & Rygel Global has been the job of British managing principal Robin Creswell (pictured). The firm’s international activities began in 1999 with the launch of a Ucits fund range that had its fees capped – a move Creswell believes was a first for the European industry.

Since then, the firm has kept the EU-regulated Ucits products – which are designed to be suitable for retail investors – limited to institutional buyers. The firm does not break out the asset split between US and non-US clients; however, along with segregated mandates, Payden & Rygel’s assets under management outside of the US represent some $35 billion (€30 billion).

With markets reflecting recently on the financial crisis, Creswell tells Funds Europe that Payden & Rygel Global managed in its second decade of business to leverage market turmoil and win trust among institutions. Today these include local authorities and sovereign wealth funds, among others.

“We were early to position accounts in the expectation that the credit crunch was not temporary but a long-term threat. All accounts and our Ucits funds traded throughout the crisis, which was reputation-enhancing for us,” he says.

In a sense, the crisis got better for the firm. The 2009 launch of the Payden Sterling Reserve Fund - a yield-chasing cash management product, created in response to Iceland’s banking crisis – gained 35 UK local authorities. The fund was targeted at them in light of the local government sector’s exposure to Icelandic banks.

Fixing on fixed income
The fund sprouted out of a history of cash management for both firm and the founder. Joan Payden founded the parent business in 1983. She had previously worked at Scudder, Stevens & Clark at a time when relatively high interest rates collided with healthy US corporate bank balances. A cash management opportunity was realised and subsequently became the launch strategy for Payden & Rygel.

The firm’s $117 billion of assets under management globally are predominantly in fixed income now, though Creswell says the equity business is also growing.

Bonds, like cash, are an asset class with currencies and rates at their heart. There’s a synergy there. Less so with equities, yet the international arm also applies fixed income analytics to its equities funds. The Global Equity Income Fund and the US Equity Income Fund apply Payden’s credit analysis to stocks.

Creswell says: “A fixed income analyst is very focused on balance sheet strength and the ability for a company to pay its coupon and return principal capital. This turns out to be a very good predictor for buying stocks that pay dependable and growing dividends, seeing as it leads you to corporations whose balance sheet is stable and strengthening.

“Our credit team was already researching the underlying companies in the fixed income strategies, so it was a case of using the balance sheet focus to get a picture of where dividend comes from – whether from profits, leverage, or issuing bonds.”

Creswell’s career before Payden & Rygel had started in banking but was initially defined by his work in the hedge fund industry. He helped launch the Man Group hedge fund business in the early 1980s and led global distribution. He then established fund management subsidiary Greystone International, a hedge fund group, for Chicago-based futures broker Gelderman. This was later acquired by Man Group.

Having launched a number of publicly offered hedge funds in several jurisdictions, Creswell has worked in businesses with sophisticated products. A former Man Group colleague says he has a knack for explaining complexity and a drive to give market appeal to what sometimes are complex products.

Arguably this was seen when he joined Payden & Rygel and launched the capped-fee Ucits funds, which now number 16 and carry capped charges ranging from a total expense ratio of 16 basis points for actively managed funds.

“Putting a cap on fees was ground-breaking in my view. I knew we would have to be really thoughtful about how we did it because it was a big commitment. It meant that whenever we contracted with a third-party provider [such as an administrator], we really needed to know the bottom line for costs. That started the process for us of really getting the best pricing detail we possibly could to know what was being paid for in our name.”

A consequence of this was Creswell wanted to avoid administrators who bundled fees into single-cost line items. It also requires disciplined management of third-party service providers, he says, adding that over the past 20 years, the business has changed providers as many as six times in what he calls “active management” of custodian, administrator and other third-party relationships. Payden’s 16 Ucits funds have about $5 billion of assets under management and the administrator is Brown Brothers Harriman.

Branching out again
As well as deep thought for fees, more recently a lot of thought was put into Payden’s latest development – this year’s opening of its first branch in continental Europe.

Payden & Rygel’s journey has followed a path typical of any US manager expanding overseas: establish headquarters in London; replicate existing strategies for international distribution; and domicile funds in Ireland – though beyond this, Creswell says the firm has tailored funds to individual client needs.

At the start of 2018, the funds and their various share classes were registered in 12 countries, including Spain, France, Germany and Austria. Most recently, Switzerland was added to the list of markets that Payden sells into.

With this, the time had arrived for a bricks-and-mortar expansion once more. “You cannot learn this lesson enough,” says Creswell . “You can grow your business so far in Europe from London, but you also have to be physically and culturally close to those institutional investors.”

Milan, chosen for the firm’s continental office, “has a critical concentration of fund managers in Europe and we see it as a good platform for distribution into central Europe. It’s close to France and Germany and, culturally speaking, we’ve been able to hire people there with some ease who have Italian, French and Spanish culture.”

Nicolò Piotti, hired from Morgan Stanley’s Zurich office in September 2017, was named managing director in Italy in March this year.

Creswell notes that the cost of having an office in Milan is “half that” of other financial centres and, needless to say, the city is an attractive place for staff.

It’s an opportune moment in the conversation to mention Brexit. “We are nine months away [at time of speaking] from the UK’s departure, so it’s now that firms need to make certain decisions such as, for some, if you want a MiFID licence, apply for it now,” he says.

MiFID provides for asset managers a ‘passport’ to access all EU markets.

“We’ve formed the view that regardless of how good or bad the Brexit deal is for the UK, a deal is likely to be signed and with a two-year transition period, there is time to consider what are the best options for the business, so let’s not overreact.”

Creswell says the firm has no plans to enter the retail market but does work with three large wealth managers in the UK and Switzerland. He anticipates expanding that list. The whole firm has 377 institutional clients around the world. “The thing I have learnt most from Joan and am driven by is that we are in the relationship-gathering business, not asset-gathering. We want to meet interesting people who we are culturally aligned with.”