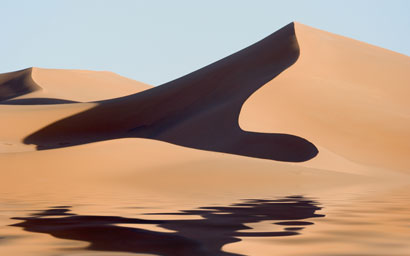 Investors are ever louder in calling for more women board members, yet the number of senior women in fund management firms is not that high, reveals Yenni Leighton of Aperitif Ventures. She discusses the broad issue of corporate diversity.

More qualified women are entering the workforce. They follow the rules, dedicate themselves to the cause – but too often, they find the road to senior leadership and executive jobs is a mirage.

There remains a naïve belief that talking about ‘dissimilar leadership’, ‘broad perspective’, ‘risk behaviours’ and ‘effective governance’ will resonate around companies. Yet the evidence suggests otherwise.

We looked at financial institutions by assets under management to see if they are building gender balance. For example, BlackRock has only 4/19 women on its board, and 4/21 senior executives (see table).

The fact is that women are under-represented. A cynical view says that women on boards is tokenism: meeting quotas, proving points. Their voices aren’t heard or views endorsed and their tenures are shorter.

LEADERS IN WAITING
The call for organisations to be inclusive isn’t new. Real value is about having a healthy pipeline of women leaders in waiting and retaining those who make it.

In some countries, governments have made this call for gender balance; they’ve even imposed quotas to force the pace of change.

There is also pressure from investors. Some shareholders that have had success include the Australian Council of Superannuation Investors, which insisted on the number of women on boards being boosted, and over the past three years, the Australian Institute of Company Directors has recorded annual growth. 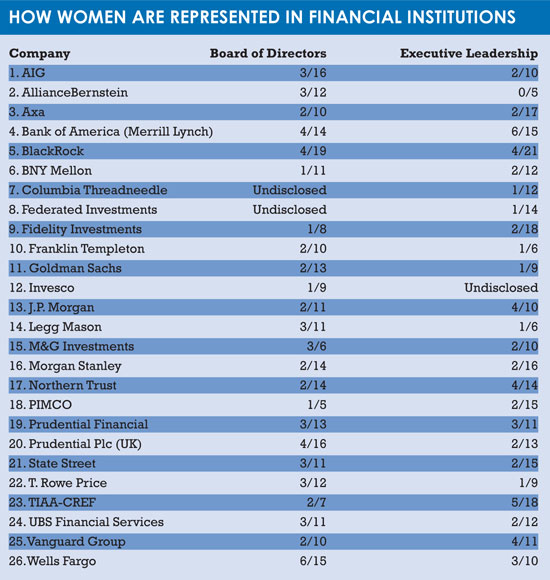 In the UK, 72 companies including Schroders, Columbia Threadneedle, Legal & General, Thomson Reuters, Lloyds of London, PwC and Virgin Money signed the UK’s voluntary charter for women, a pledge for gender balance. Also in the UK there is The Diversity Project, which sees 30 investment management firms tackling poor levels of diversity.

There has even been an exchange-traded fund launched on the topic, called the Gender Diversity Index Exchange Traded Fund, which targets US companies with the highest gender diversity.

There is also the introduction of the Women’s Charter and the Strategy for Equality between Women and Men (2010-2015) by the EU, while in the US the Thirty Percent Coalition uses shareholder contact to obtain dialogue on governance, recruitment practices and other issues.

TOP JOBS FOR MEN
Corporate culture and change are diametrically opposed. It’s a given that corporate boards mean white middle-aged men from a narrow demographic.

But regulation demands more robust risk management and supervision. As corporate governance has evolved, so have directors’ responsibilities.

Figures, though, show there are more male candidates. Competing with women, it’s 30% more likely that the man is selected. Are top jobs for men only? Are they better at interviewing? Or are they pre-selected?

To prevent female talent disappearing, cultures have to change. Some of the old practices that talent searchers need to fight include: behind-closed-doors searches that specify certain male director characteristics, experience and interests; a reluctance to use traditional careers channels to advertise roles; and inflexible working arrangements, such as to do with child and parental care (33% of women, aged 45-56, are termed the ‘sandwich generation’ – looking after children & parents).

There also exists a failure in training and mentoring that’s making women less prepared for board roles, and there is a lack of disclosure on specific guidelines that would make it possible to hold members accountable.

GENERATIONAL MINDSET
There is no simple solution to this ingrained generational mindset that thinks: ‘It’s how we’ve always done things’. What is needed then?
Impose a quota for boards and senior leadership.

New board dynamics should lead to greater cross-pollination of ideas, balanced decisions and comprehensive oversight. Compromise is necessary to remove ‘groupthink’. This means significant learning to deal with bias and build trust with people different from yourself. Are you willing to change the game?

Yenni Leighton is a strategy and change consultant