Funds Europe – What key areas of fixed income are developing through Luxembourg fund structures and what challenges do asset managers and fund administrators face?

Gutton said that private debt assets increased by more than 40% last year, with the market now exceeding €181 billion of assets under management (AuM). He described private debt as a “very strong and increasing sector for Luxembourg”.

Albrecht said there had been a “boom” in private debt funds and that these funds provided much-needed finance for the real economy. “With regulations imposed on banks, it was a way for some markets to find fresh liquidity.”

But, he added: “Again, uncertainty is coming with the rise of interest rates. Uncertainty is never good, so we don’t know yet what the impact could be on private debt funds.”

“We need to assess the match between the needs of investors and which investments are available. and as we all know, there are a lot of difficulties with data in the esg and sustainable frameworks.”

A fixed interest return is normally a feature of publicly available vanilla bonds, said Niedner, while private debt often bears variable interest. This is an important distinction, he said, and with traditional fixed income paying low interest rates in recent years, fund providers will be watching to see how investor appetite changes as rates move higher.

Niedner pointed out how the AIFMD, after revisions, is likely to cover private debt funds. Stadler said there had been an increase in the number of securitisation vehicles established in Luxembourg thanks to a reform of Luxembourg’s securitisation law that added to their flexibility.

Funds Europe – Thomas Richter, the head of German funds body the BVI, has said that EU rules and regulations (for example, Priips investor documents) were a drag on the asset management industry to the extent that they prevented firms investing in their own development: for example, digital transformation. Would you agree?

Xanthopoulos agreed in part. Complying with regulation does consume resources and requires notable effort, given the volume and depth of European regulatory requirements. “However, I would disagree with the statement that regulation prevents firms from investing in themselves,” he added.

This, he argued, was made evident at major asset managers and asset servicers, where firms have overhauled data management strategies. He suggested that firms with efficient data management strategies that formed a core component of wider business strategy meant that any new regulatory requirement would be met by the querying of existing databases, extracting the information required, and then adding any additional information that was needed to comply with any new rules.

Firms without sufficient data management strategies were likely to be those struggling, he suggested.

Albrecht sympathised with the BVI head but, echoing Xanthopoulos’s comments, suggested there was a connection between regulatory pressure and digital transformation as firms employed technology to support compliance.

There is “one single envelope” that contains the asset manager’s budget, said Albrecht. The contents are eaten up to some extent by the costs of compliance with regulatory rules, and what remains in the envelope is spent on transformation and technology that is – at least in part – needed to comply more efficiently with existing and new regulations in the first place.

To some extent, therefore, regulation and digital transformation contribute to each other.

“What is difficult is to understand from a strategic point of view what investment we want to make. Indeed, ten years ago, you could have invested into a new system resulting in a three-year implementation project, and you would have had ten to 15 years to harvest the fruits from that investment,” said Albrecht. “[But] maybe today’s investments will be obsolete in two to three years’ time, so you need to understand where you will need to put your euros in terms of technology.” 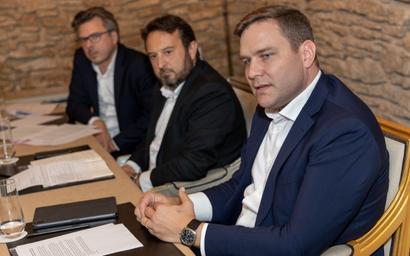 There are other options, said Xanthopoulos. “For example, there is a lot of debate nowadays between asset managers and asset servicers as to what is core to their activities and what is non-core. We see a trend where market players invest in developing and differentiating themselves on their core activities and look to outsource that which is non-core to a specialised body.”

For a firm to focus on non-core services could result in a loss of revenue, he said, and offered limited added value that was costly to maintain.

“More and more market players explore the route to outsource these non-core activities to partners who have made these functions a core functionality of their own business and can leverage investment/resources for a wider range of clients with more efficient results.”

Gutton mentioned that in the current era, many regulations deal with disclosure requirements. “We all agree that there is a need for investors to be well informed so that they can make ‘informed’ investment decisions,” he said. So, from an asset manager’s perspective, making disclosures that are required by regulation is an unsatisfying activity when the disclosures “do not properly reflect” the reality of what is happening inside a product.

Gutton referenced the Priips KID disclosures, which critics such as the BVI said contained flawed methodologies concerning the calculation of costs. But he also said there had been recent improvements through the revision of regulatory technical standards.

Dumitru pointed out the importance of the EU listening to the opinions and recommendations of the fund associations – particularly over future regulatory initiatives and the impact on global competitiveness for EU-based asset managers.

Niedner noted that at the European level, there were regulations or proposals that genuinely centred on creating more efficient European capital markets. But this was not always the case, given the number of bodies involved in creating and influencing regulation.

Xanthopoulos said an important voice missing from the broad debate was “the voice of the people that we try to protect”. Noting that the Priips issue centred on trying to achieve more clarity on past performance and how transaction costs are calculated, he nonetheless questioned whether this additional layer of regulation was required. “Sometimes we need to step back and think whether what we’ve decided to implement serves an objective and if that objective has been correctly covered.”

Stadler queried whether this clarity would generate more returns or merely increase costs, albeit not losing sight of the fundamental principle of investor protection.

Niedner warned that the pace of new directives was quickening. “Every year, or every second year at least”, there was a new AML directive, he said. To this extent, it felt like “you sometimes have the impression that necessarily once a Directive has been adopted, the next point is working on the new Directive, without waiting to see how efficiently this Directive is actually working and then trying to improve it”.

Our Luxembourg panel took place in September, in person in Luxembourg.

Funds Europe – What key areas of fixed income are developing through Luxembourg fund structures and what challenges do asset managers and fund administrators face?