Funds Europe – How would you describe the regulatory ‘temperature’ in Luxembourg at present? Where is the focus of Luxembourg’s financial regulator, the CSSF, and what underpins this?

According to Xanthopoulos, there has been something of a slowdown in terms of new regulations – certainly in contrast to the tsunami that engulfed the industry after the 2008 financial crisis. However, the EU ESG regulatory framework was “keeping the industry busy”, he added.

Another key element that the CSSF is focusing on as Luxembourg’s financial regulator is anti-money laundering (AML). AML is “very high” on its agenda, said Xanthopoulos, with the multiple objectives of protecting investors, protecting the finance industry itself and protecting Luxembourg’s own reputation as a centre of fund excellence.

Albrecht highlighted a new wave of uncertainty around the topic of energy, given Russia’s invasion of Ukraine and the subsequent energy crisis. “We need to potentially relax some of the rules. Some investments like nuclear energy might actually become ESG investments,” he said. 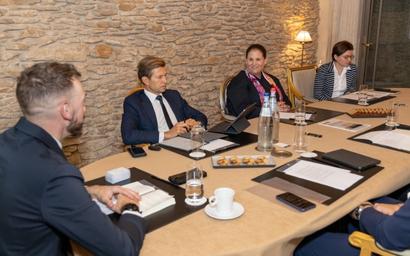 He suggested the crisis, which has seen huge market volatility, could help to refocus regulation: “A big wave of regulation came after 2008 and the [current] crisis could be a way to identify where regulations are potentially weak and where regulators might need to adjust or reinforce regulation.”

Gutton said the CSSF is “modernising and reinforcing” some of its oversight tools and aims to further clarify some of the practices that are common in Luxembourg.

Stadler observed that the regulatory load for asset managers hadn’t reached a post-Lehman intensity at present but that the Sustainable Finance Disclosure Regulation (SFDR), the green taxonomy regulation, AIFMD II, the Eltif and MiFID II reviews were all creating a number of new legal obligations that would affect compliance.

“It’s storm-like,” she said – in other words, not as tempestuous as the post-Lehman tsunami. Fund management firms want clarity, but regulators don’t necessarily always have the answers.

Stadler added: “Another thing at the top of the agenda of the Luxembourg regulator is the supervision of fees and costs in funds to monitor what’s happening for investor protection purposes.”

Dumitru noted that from the point of view of a service provider, it was “straightforward communication with regards to the outsourcing of AML duties”. This is relevant in the case of service providers with respect to governance and conflicts of interest.

Funds Europe – How would you describe the regulatory ‘temperature’ in Luxembourg at present? Where is the focus of Luxembourg’s financial regulator, the CSSF, and what underpins this?

According to Xanthopoulos, there has been something of a slowdown in terms of new regulations –...