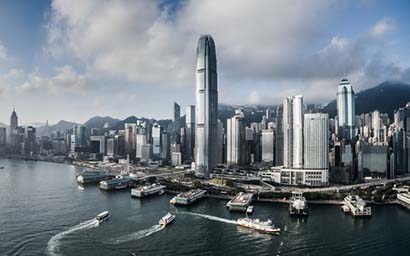 By the end of August 2020, the ETF/exchange-traded product (ETP) market had reached a record US$7.1 trillion (€6 trillion) of assets under management (AuM), according to the consultancy ETFGI, but just $45 billion of that was attributable to the Asia-Pacific hub of Hong Kong. Trading in ETFs on the Hong Kong Stock Exchange typically accounts for less than 5% of total volumes.

This does not mean that Asian investors are not buying ETFs, but they were perhaps slower to the party than US and European investors. They have, however, been catching up in recent years.

“All the big tickets that get traded into Europe and the US by Asian institutions don’t show up when you start to talk about size of platforms,” says Sean Cunningham, head of Asia ETFs at JP Morgan Asset Management (JPMAM). “It doesn’t take into account the trading that is happening cross-border.”

The appetite for these products among Asian investors is mounting, but they accounted for less than 5% of ETF AuM in Hong Kong at the end of 2019. Some believe this situation could be about to change – potentially driven by cross-listings of European Ucits ETFs.

Overcoming obstacles
The current low level of cross-listings of Ucits ETFs in Hong Kong – only DWS’s Xtrackers are listed on the Hong Kong Stock Exchange (HKSE) – is partly due to historical obstacles. In 2019, Clearstream created a link to the HKSE to overcome some of them.

But business has not flowed into Hong Kong as quickly as it did in other markets, such as Mexico, where M’Rabti helped set up similar links. The HKSE continues to be dominated by a not-very-diverse selection of locally listed ETFs.

“You would struggle to build a global portfolio,” says Jackie Choy, director of ETF fund research, Asia at Morningstar. “There are a lot of Chinese equity products of different kinds. In fixed income, the exposure is largely to Asian and some Chinese indices.”

For M’Rabti, the key to changing this is education. Asian buyers of Ucits ETFs (or US-listed ETFs) still tend to go directly to the exchange where the product has its primary listing, believing that this will give them access to better liquidity. But in some ways, this is a false perception.

“In terms of liquidity, you should not worry about what you see on the screen on the stock exchange,” says M’Rabti. “You could at any time go to the primary market.”

Accounting for optics
The desire for liquidity is a strong one, however, and the point about look-through liquidity is sometimes lost on investors. Furthermore, liquidity constraints are sometimes prescribed by risk frameworks.

“A lot of institutions like to see big blocks of liquidity,” says Cunningham. “Some of them are sophisticated enough to understand that the optical liquidity is not always the most important thing, but for some institutions it really is. And there are certain institutions that have risk-framework restrictions around trading funds that aren’t of a certain size.”

Cunningham has seen “a real shift of Asian institutions going to the Ucits product line to get their global exposures”. But this is driven by the deepening liquidity of the European ETF market, which allowed it to catch up with the US. JPMAM prefers to meet that demand through products listed in Europe and the US, and has not cross-listed anywhere in the Asia-Pacific region outside China.

“In China we have a local platform, so we’re putting product on the ground in there,” says Cunningham.

DWS sees it differently. The ability to cross-list Ucits ETFs from Europe and the fact that the Ucits framework is well accepted in Hong Kong attracted it to the region as a hub.

“Cross-listing helps us to benefit from economies of scale, which is key in the passive business,” says Marco Montanari, DWS’s head of product management for Asia-Pacific.

Access to China is another reason behind DWS’s choice – though this is more about forward planning than current sales.

ETF evolution
So, what prospect is there of Hong Kong developing into an ETF hub for the Asia-Pacific region? It is a bit of a chicken-and-egg scenario; the more products that list, the more liquidity there will be to attract investors. And there is certainly a rationale to cross-listing European and US-listed ETFs that invest in the Asia-Pacific region.

“The evolution of trading your own market in your own hours will start to be something that clients will demand going forward,” says Cunningham. “The spreads on these products get naturally tighter when the underlying markets are actually open and trading. Funds that cater to a certain client and need will get traction because that is where clients will find the tightest price.”

A Clearstream report published this year entitled ‘The stars are aligning for Hong Kong’s ETF market’ predicts that demand for ETFs in Asia-Pacific will rise from $1.5 trillion to $5 trillion over the next five years. To meet that demand, M’Rabti would like to bring all the products in Europe that match Asian investors’ needs to Hong Kong via cross listings.

Progress has been made to facilitate this. The Hong Kong Securities and Futures Commission (SFC) relaxed its master-feeder regime last December and market makers are now exempted from paying stamp duty when engaging in primary market activity in Hong Kong-listed ETFs.

However, there is more to be done. As yet, there is no mutual fund recognition between Hong Kong and Ireland, and M’Rabti says it can take six to nine months for funds to be authorised. Furthermore, if the prospectus in Europe changes, it must be approved by the Hong Kong regulator.

“There is a will to come to the market, but there is a regulatory burden,” says M’Rabti.

Another problem is the absence of a retail market for ETFs in Hong Kong. This is largely down to the fact that Hong Kong, like many other Asian markets, has not undergone a retail distribution review, and so there is little incentive for the banks that dominate retail distribution to sell low-cost ETFs.

“Hong Kong is already a regional trading hub for ETFs, but it could further enhance its position by reforming its distribution system from a commission-based system into a fee-based system,” says Montanari. “Other jurisdictions that implemented similar initiatives saw significant growth in ETF trading.”

Such a move is not really in sight, but other regulatory improvements – including perhaps bilateral mutual fund recognition between Hong Kong and Ireland, which accounts for 62% of the European ETF market – may lie closer.

“It’s a question of time,” says M’Rabti. “Asset managers and other players in the market are lobbying to see how we could ease the regulatory burden.”

Then there is the issue of China. If Montanari’s hope that there will be schemes to allow mainland China investors to buy Hong Kong-listed ETFs is realised, Hong Kong could become a truly interesting hub for the Asia-Pacific region.

Such a possibility might come to pass through the Greater Bay Area plan, suggests M’Rabti. This grand project includes discussions about a ‘Wealth Connect’ between Guangdong, Macau and Hong Kong. As yet, however, the scope of this initiative has not been defined.

“We will have a clearer view next year,” says M’Rabti.