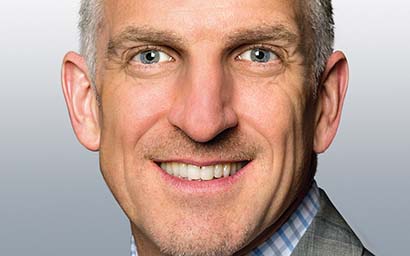 Damon Williams, chief executive of RBC Global Asset Management, has been recruiting to make RBC as well-known in European asset management as in capital markets. Interview by Nick Fitzpatrick.

Royal Bank of Canada is a well-known player in European capital markets, wealth management and custody banking. In each of these three spheres, the letters RBC ring out.

Its own building, which houses 34 equity professionals, is where Funds Europe meets Williams, who became joint CEO – the role was shared initially – of RBC GAM in May 2015. He has been sole CEO since last year.

Williams is an actuary by background, although his parents (an engineer father and a mother who worked as a chemist) assumed he’d become a scientist.

He arrived at RBC GAM – which had $434.5 billion (€382.6 billion) of assets under management (AuM) as of September 3 – as a result of a 2008 deal, when the Canadian bank purchased Phillips, Hager & North Investment Management. Williams had been there since 2005 and, post-deal, became global head of RBC GAM’s institutional business and president of his former business.

Since BlueBay, there have been no more deals, but the firm has been expanding organically. In Germany, for example, Roland Schmidt, formerly at Carmignac Gestion, was recently made director of regional business development and tasked with building the RBC GAM presence in the German institutional market.

Another notable hire in business development was that of Guinevere Taylor, whose appointment not only signals where RBC GAM is taking its UK and continental Europe business, but also says a lot about where it sees itself fitting into institutional investors’ lives.

The aim of hiring Taylor was for RBC GAM to focus on business development within the UK Local Government Pension Scheme (LGPS). Like a number of local authority pension funds that make up the LGPS (and which have in recent years pooled their sizeable individual assets to offer very large mandates), RBC GAM identifies strongly with responsible investment.

Moral outlook
“I think there is a meaningful set of clients that have a moral world view,” says Williams, adding that RBC GAM does not invest in anti-personnel landmine or cluster-munitions manufacturers.

The firm publishes an annual environmental, social, governance (ESG) survey. The latest had 590 respondents with AuM ranging from $1 billion to $9.9 billion and reflected how investors are coming to see ESG-led investing as compatible with respectable returns. Most investors surveyed in 2016 said they were unconvinced about ESG as a source of alpha or risk mitigation, but the most recent survey (October 2018) showed a rise in those who supported ESG as an alpha generator. The figure was 38%, compared with 24% a year earlier.

“If our investment teams can understand the ESG influence on securities valuations better than our competitors, then it will give them an investment edge,” says Williams.

RBC GAM’s conversation in Europe – where it managed $34.7 billion, excluding BlueBay, at the end of July - is with institutional investors. In Canada, however, it is the largest provider of mutual funds in the retail market.

Meanwhile, BlueBay looks set to have a growing role in RBC GAM’s Canadian multi-asset business, thanks to its emerging markets capability. RBC GAM has more than 100 billion Canadian dollars (€67 billion) in balanced strategies for Canadians and the decision has been made, says Williams, that emerging markets are becoming more “significant and reasonable” for those who are still two decades away from retirement.

AuM in Canada is split about half and half between retail and institutional and the scale acquired means the firm offers mutual funds that are 20% lower than the industry average, he adds.

RBC GAM’s exchange-traded funds (ETFs) gained $359.2 million in sales during the first three-quarters of the year to bring its ETF assets to $5.1 billion.

Planes, drones, pilots
When a question about ETFs comes up, Williams mentions challenges with distribution in the US: “We could launch them, but who’s going to distribute them?” He’s more comfortable talking about technology, which he says is affecting all parts of the business, be it manufacturing, distribution or operations. “And it runs from retail through to institutional.”

RBC GAM’s investments in technology are guided by a philosophy that says humans and machines will work together to make investment decisions, he says. “Pilotless drones are better for some tasks, but not all, and piloted planes are better for others.”

He’s partly referring to the quant strategy that the firm built up in 2010/11 and which now runs 17 billion Canadian dollars, mainly invested in equities.

Out of 1,400 staff globally, tech roles account for 120. Blockchain and cryptocurrencies are under analysis, he says: “We’re not about to launch any blockchain services to clients, but might experiment with our own money.”

Describing crypto assets as “controversial”, he indicates that they are a common topic of conversation, but warns: “Cryptos are heavily speculative and risky. I would not advise anyone who has not spent a lot of time understanding crypto assets to invest substantial money in them.”

These currencies also pose considerable operational challenges. “Crypto assets might fade into obscurity but they might also become relevant. There are, though, challenges with custody and valuations,” he says.

“There are still a lot of questions, but if crypto assets do become relevant or even disruptive, then we will have to help clients navigate through that.”

Considering the digital challenge faced by asset managers, perhaps it’s appropriate that one firm’s chief executive could have been a scientist. In the end he became an actuary, and says he got into asset management after finding he preferred the asset side of the asset-liability equation.

Now his job is to build RBC’s assets – and with a few local authority mandate wins, the business may one day be known for more than capital markets, wealth management and custody.