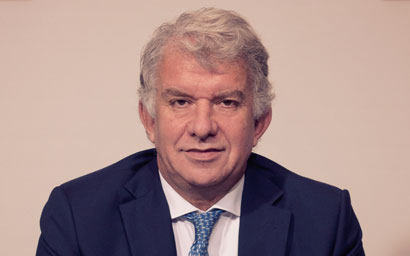 Amundi chief Yves Perrier opens up to Mark Latham about his ambitious plans to expand in Europe and Asia following the firm’s mega-merger with Pioneer.

“Pioneer was the perfect acquisition for us: it really is a great opportunity,” Yves Perrier says of the €3.5 billion all-cash acquisition of Milan-based asset manager Pioneer Investments, which Amundi bought from the Italian bank UniCredit earlier this year.

“Before the Pioneer deal, we were number one in Europe by size and profitability,” muses the founding chief executive of Europe’s largest listed asset manager, Amundi, as he looks down on a commanding view of Paris from his Montparnasse penthouse office.

The ebullient 63-year-old former investment banker – who in his youth considered a career as a professional football player before plumping instead for one in finance – says the merger will give Amundi “a very strong presence in all countries of the eurozone”.

With a growing reputation for acquisitions, cost-cutting and efficiency, Amundi – created in 2010 following a merger between the asset management business of Crédit Agricole and Societe Generale – is now the world’s eighth-largest fund manager, with assets under management that reached €1.4 trillion in September.

The merger with Pioneer, which completed in July, is so far “going smoothly and is on track”, Perrier says.

Speaking in fluent English with a strong French intonation, he reels off a list of impressive financial stats for the first nine months of 2017. These include net inflows of €57.5 billion, comfortably on track to beat the €62 billion of inflows for the whole of 2016,

Punctuating key points with percussive taps on the table, the list continues: net revenue of €1.9 billion and net income of €650 million for the first three quarters of 2017, up 6% and 11% respectively on the same period last year.

Since Amundi was floated in 2015, its shares have risen more than 50%. The company is now valued at more than €14.5 billion, all of which helped to pay Perrier a salary of €2.4 million last year.

“As regards net inflows, we are at a pace which is 50 % higher than our objective. We have significantly beaten all the objectives of Amundi standalone,” he says.

A better position
So, has the Pioneer acquisition emboldened Perrier for further expansion? “It will depend on the opportunities. What I do know is that we are in a really good position and didn’t need acquisitions even before Pioneer.

“Of course, when you don’t need something, you are generally in a better position to get it,” he observes philosophically.

“Generally speaking, the reality in most transactions is that the seller sells when he is obliged to sell. We acquired Pioneer because UniCredit needed to increase its capital and so was obliged to sell.”

Asked where he sees the main growth opportunities for Amundi in coming years, Perrier answers simply: “All the countries of Europe.

“We are already the third-largest in Italy and Austria, but I consider we could become number one.”

In Germany, where Amundi is the largest foreign fund manager and distributes €40 billion of assets, the aim is to double this within three or four years. A similarly ambitious target has been set for Amundi’s Spanish and Belgian operations.

Perrier is also optimistic for Amundi’s home market in France, in which the firm is the largest player and where it has gained three percentage points of market share over the past five years.

Outwith Europe, he also expects growth in all the Asian countries where Amundi currently operates, including India, China, Tawian and Malaysia.

“My strategy is very pragmatic and is to go where I think we have a good probability to take a leading position,” he says.

He points out that, having started from scratch in 2010, Amundi’s business in Japan and South Korea amounts to €100 billion of assets under management, similar in size to the €106 billion that Amundi distributes in France through its four partner networks.

“The eurozone for us is what we know very well but Asia is also for us a territory of conquest,” he says.

“When we made the acquisition of the relatively small Smith Breeden Associates in 2013, the idea was not to become a major player in the US market,” Perrier says.

“The aim was to be able to provide our clients in the Middle East and Asia with US expertise, as 75% of their investments are denominated in US dollars.”

He believes there is room to grow in the US, particularly the firm’s institutional business. Of Amundi Pioneer’s €74 billion of assets currently under management in the US, 74% is retail and 26% is institutional.

Attrition rate
When the tie-up between Amundi and Pioneer was announced, there were fears that a target of €150 million of cost savings would lead to savage job cuts. But Perrier denies there will be a high attrition rate, saying the merger is “complementary in terms of expertise and will reinforce our capacity”.

Well over half of the headcount drop will, he claims, be achieved through natural staff turnover combined with a hiring freeze implemented this July.

He also points out that Pioneer’s main operational centres around the world are not places where Amundi employs large numbers of people.

“With Pioneer, we have acquired many very talented people that we would have hired to fuel Amundi’s organic growth in any case,” he says.

Perrier envisages “net synergies”, job losses, of around 500 people – around 10% of the combined workforce - 134 of whom will be in France.

The target cull in staff is similar to those set recently by other asset managers following mergers. For instance, a cut of about 10% is also expected over the next three years as Standard Life and Aberdeen Asset Management are integrated following this year’s merger.

The aim at Amundi is to implement front-office reductions by the end of this year, with cuts to back-office staff to be completed in 2018. Perrier also says that the job cuts will be spread out across different countries, according to the company’s operational needs and that no office will be closed.

There will also be a degree of rationalisation, he adds, which will see euro fixed income business being centralised in Paris, global fixed income and emerging markets expertise in London and multi-asset investing in Milan and Paris.

Another big change will be the phasing out of BlackRock’s Aladdin investment management system from Pioneer offices and its replacement with Amundi’s own proprietary software.

Last year, Perrier ruffled feathers in the UK by saying that a post-Brexit Britain should lose its financial passport to sell services into the EU and that Brexit was a business opportunity for the remaining 27 member states.

But Brexit is unlikely to directly impact Amundi to any great extent, he says, because the firm employs only about 125 people in London, with a similar number of Pioneer employees having now joined the fold. “The UK is mainly for us a production centre: an investment platform,” he says.

On the contentious issue of whether to charge clients for research and analysis once MiFID II rules come into force in January, Amundi has yet to decide.

Earlier this year, the firm said that it would, unlike the majority of fund managers, charge clients rather than absorb such costs on to its own balance sheet. However, it is now reviewing that decision following the Pioneer merger.

Looking ahead, Perrier says he is “overall very confident” about Amundi’s future. “We have 36 business lines and we have room to grow in all of these,” he says. “Over the next few years I expect that the business environment will be tougher for asset managers and there will be pressure on margins due to the continued low interest rates.

“When times are difficult, there is always a strong pressure on reducing fees. Those who succeed will be those who are able to combine efficiency and innovation.”

He adds: “Some firms will have the strength to adapt by themselves and others won’t and they could become targets for consolidation.

“From the mid-nineties to the global financial crisis, people adopted a way of working which is no longer relevant. The industry has to adapt to reinforce its capacity for innovation and the industrialisation of its products and processes.”