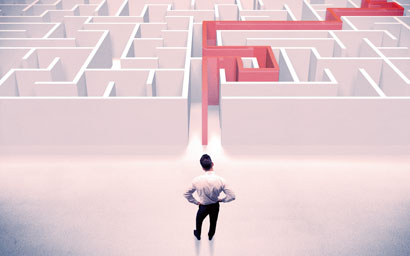 For all the talk of rate normalisation, bond managers do not see an end to stimulus just yet. Fiona Rintoul looks at how portfolios are positioned at this confusing moment.

Speaking to fixed-income fund managers at this perplexing point in the bond market cycle, one is reminded of the last line of Bret Easton Ellis’s novel American Psycho: “This is not an exit.”

The Federal Reserve has signalled the end of quantitative easing. Indeed, in contrast to the European Central Bank (ECB) and the Bank of England, it has raised interest rates.

But is this really the end? Developed-market central banks want to tighten monetary policy and reduce the amount of bonds on their balance sheets, but in a world where announcements by central banks are monitored as closely as premature babies, are we really on the road to normalisation?

“In five years’ time, the Fed could be at $2.5 trillion (€2.1 trillion) on the balance sheet,” says Beck. “I’ve no idea whether the Bank of England’s balance sheet will be bigger or smaller and I’m confident the ECB’s will not be smaller.” In other words, the exit is still a long way off.

There is much to say about the pros and cons of quantitative easing and how the programme has affected the markets and wider society. For sure, there have been negative consequences, and you could argue these have fuelled the wave of populism currently sweeping developed countries.

“Part of the public relations challenge central banks are facing since the global financial crisis is that their response to that crisis helped the financial sector and hasn’t benefited the man on the street,” says David Riley, head of credit strategy at BlueBay Asset Management.

But whatever your view on quantitative easing, bond fund managers have no choice but to get on with the job of investing in bonds, and though it may feel like central bank-watching is the new market analysis, that is not always the case, says Gilles Pradère, senior fund manager at RAM Alternative Investments. “It’s true that central banks have a strong influence, but they are not killing the influence of financial markets,” he adds.

Meanwhile, from the vantage point of Hong Kong, Thomas Kwan, head of fixed income at Harvest Global Investments, notes that central banks are only part of the story on the demand side, too.

“We’re not too worried about central banks withdrawing support,” he says. ‘There is demand support from the ageing population.’

Just the same, increased intervention by central banks has taken its toll.

“We do notice that continuous yield and spread compression is leading to a very low compensation for credit risk in especially high-yield markets and has facilitated an erosion of investor protection in corporate bond markets,” says Kommer van Trigt, head of global fixed income macro at Robeco.

Where to invest?
However you assess central bank policy and its influence on the bond markets, the question now is where to invest at this sort of turning point when quantitative easing and extremely loose monetary policy may be drawing to a close (though not in Japan). That, of course, kind of depends on where you see things going from here.

“If the market got a sense of inflation pressure building that would require a step change in monetary tightening, then government bonds look vulnerable, but there’s not much evidence to support that idea,” says Lewis Aubrey-Johnson, head of fixed income products at Invesco. The ECB and the Bank of Japan are still buying “tens of billions of securities each week”, he adds. The pace of growth is relatively modest. Wages aren’t increasing that much despite almost full employment. The backdrop could be stable for a long time.

“Europe is further away from inflation inflection point,” says Jon Jonsson, senior portfolio manager for the global fixed income strategies at Neuberger Berman. “The US could be closer. It’s not that we expect runaway inflation, but the market is somewhat complacent.”

What to do? “You’ve got to look at riskier assets,” says Invesco’s Aubrey-Johnson. For him, this largely means taking on some credit risk.

“You can buy credit in the knowledge that the backdrop for credit is pretty solid right now,” he says. “Default rates are very low, and companies can refinance debts very easily.”

It is very much a stock-picker’s market, though. In the European high-yield market, for example, index averages are being driven down by a number of very large high-quality securities that Aubrey-Johnson describes as “quasi-investment grade”.

“Fortunately,” says van Trigt, “we are not forced to buy the index, so we can make our own choices on where to invest in this environment.”

Others see better opportunities elsewhere. Jonsson is moving out of credit and emerging markets (EM) and into rates and currencies – even if he does still see selective opportunities in the credit and EM sectors. “Fundamentals are not improving any more,” he says. “We prefer to take risk in other areas. We’ve increased our FX risk by 50% this year.”

For Pradère at RAM, meanwhile, the watchword is quality. This is partly built into the structure of the funds, which can only go to 25% for high yield.

“We prefer to increase the quality of our investments instead of chasing extra yield all the time,” he says. “Then you really need to look for opportunities wherever they are.”

Within portfolios that prize quality and diversification, Pradère has a couple of guiding principles in the current environment: to avoid duration risk, which “isn’t worth it most of the time”; and to avoid illiquid products. “We are looking at liquid products,” he says.

Another option is to target markets that are in a different macroeconomic position to first-world markets. “We see a number of countries where inflation has collapsed, growth is disappointing and monetary policy is getting more accommodating,” says van Trigt.

Robeco has added exposure in a few of these markets, such as Indonesia and Brazil – the latter currency-hedged. It is also bullish on Mexican local rates, again currency-hedged. “Continued inflows into the asset class are supportive and cumulative inflows are still below the pre-taper peak,” says van Trigt.

BlueBay AM is one of the pioneers of investing in local currency bonds in emerging markets. An internal debate at the firm concerns the currency risk of these investments should the dollar strengthen. “We don’t think we will end up with a strong dollar,” says Riley, “but that is the single biggest risk factor for local currency bonds in the near term.”

Other risks, such as political risks, are getting harder to pin on any one region.

“Is the volatility of the Polish złoty any greater than that of the British pound?” asks Beck. Or – to look at the situation a different way – why is it that the only bond manager who truly zings with enthusiasm for the future is Harvest’s Kwan? Could it be because he knows China much better than we do – and likes what he knows? “The majority of the concerns people still have about China are from a few years ago,” he says. “Not many people really realise how much China has changed.”

With the future so difficult to predict, some managers are effectively adopting a holding position. “We go in between two extremes,” says Aubrey-Johnson. “We try to find a little bit of relative value where we can to generate some carry, while keeping something back in terms of liquidity, waiting for the market backdrop to change a bit.”

Thinking ahead
With many high yield bonds offering yields that aren’t all that high, it isn’t easy for active managers to find good investments. At the same time, managers don’t want to be out of the market if the macroeconomic background isn’t going to change any time soon.

“We’re trying to think ahead,” says Aubrey-Johnson. “We’re not tied to benchmark indices, so we don’t have to be fully invested.”

This begs the question of whether bonds can still do what they used to do for investors. It’s become commonplace to say that there are no risk-free assets any more. A bigger problem perhaps is the increasing correlation between bonds and other asset classes. “People used to invest in fixed income because of the inverse correlation to other asset types,” says Beck. “Low interest rates have driven all asset prices higher.”

Even if interest rates go up, that correlation could persist. In any case, there is no cast-iron guarantee that interest rates will go up significantly.

“Central banks are trying to find an exit, but they always find a reason why they can’t find the exit when they get there,” says Beck.