2015 was typified by uncertainty, and 2016 has seen that uncertainty mutate into a noxious medley of political, economic and financial menaces. In every region and market, risks loom large – some are universal, others particular.

Funds Europe, in association with RBC Investor & Treasury Services, hosted an event at which industry experts offered their take on the key risks facing global economic stability – and the audience was invited to vote on which they thought were most serious.

On October 20, with the US presidential election less than three weeks away, fund professionals who attended ‘Risk, Risk Everywhere’ ranked the prospect of Donald Trump becoming president the greatest risk to US economic stability from a carte du jour of major economic and political prospects currently on the horizon. 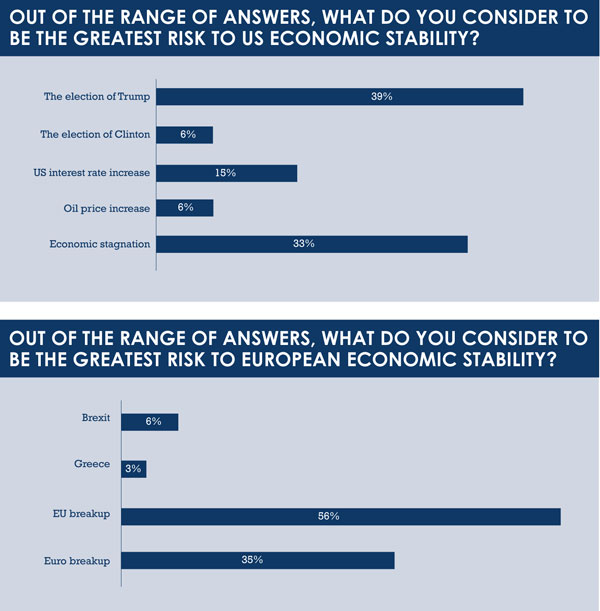 Industry luminaries were conversely intensely relaxed about the election of Hillary Clinton – only 6% viewed her election as a threat, while 39% were concerned about Trump.

However, panellists were less convinced about the election’s destructive potential. Robin Creswell, managing principal at Payden & Rygel, noted that

since 1900, there have been 29 elections, and a recession has followed nine of them.

“The relationship between recessions and elections is not significant,” he said. “It’s more likely other factors will determine the short to medium-term outlook for the US economy.”

Likewise, Marino Valensise, head of multi asset at Barings, said key economic indicators in the US were positive, and there was little to suggest either prospective presidency would damage these favourable conditions.

“Profits are up, labour costs have been reduced, profit margins are at record highs, unemployment is virtually at a historic low,” he said. “While I don’t like the US equity market, I do like high yield bonds – they’re the best US asset to hold.”

However, both Creswell and Valensise weren’t worried – and Valensise played down fears of European disunity by noting the increasingly high levels of security co-operation evident in the EU as a result of Nato; shared concerns in key areas were bringing states closer together, he said.

Fears of a Chinese banking crisis loomed large in the minds of panellists and the audience, with 56% citing it as the greatest risk to Asian economic stability. 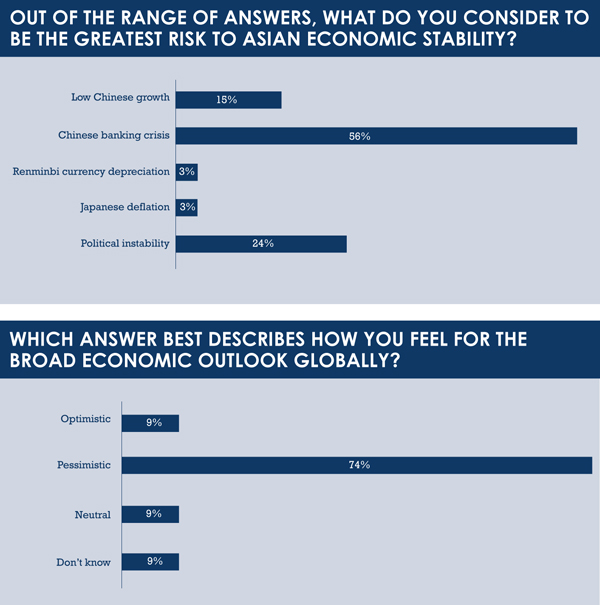 Panellist Paul Diggle, senior economist and multi-asset strategist at Aberdeen Asset Management explained that the country has failed to curb its credit system excesses, which could produce a full-blown financial meltdown, akin to the Lehman Brothers-led crash of 2008.

China’s credit-to-GDP gap has reached 30.1%, its highest level to date, higher than in any other major economy currently, and higher than the levels evidenced prior to the East Asian economic crisis.

something has to give

The panel and audience alike were bearish on the world’s economic outlook moving forward; 74% were pessimistic, and just 9% optimistic – as many as were unsure, or neutral.

“I hate to mention Marx, but the world economy seems to be on the verge of collapsing under the weight of its own contradictions,” said Diggle.

“We’re currently in the new mediocre, and helicopter money is a crisis away. Central banks may be running out of options.”

Still, he did see some upside risks, which offered opportunities for investor participation.  In particular, more supportive fiscal policies in the US and the UK, and a  productivity rebound.

“It seems we haven’t yet figured out how to make the most of the various technologies we have, and I certainly don’t buy the argument that there are no good inventions left to invent.

Creswell explained the world’s predicament: “Printing money has made government debt default-free for the foreseeable future, and this, combined with ultra-low rates, means even risky borrowers can borrow very cheaply – and the wheels of
our economies have therefore kept turning.

“However, those measures were intended to give governments time to reform their economies, and that time has not been used well. We are hooked on the morphine of central bank action.”

“As the average age of populations rises across the globe, so too does the level of household saving in economies - and central banks won’t be able to pay out sizeable interest on those savings,” he said.

Valensise, while not pessimistic about the global economic outlook, acknowledged that ultimately, “something has to give”.

He said: “The debts of governments in the developed world are unrepayable, and the best escape route would be inflation, achieved by helicopter money.

“Helicopter money can work well, the example of Canada is a testament to this. Not all countries that go down that path are going to end up being Venezuela or Zimbabwe.”

While the past eight years have been no picnic for politicians, central banks or investors in terms of risk, it’s evident fund professionals are overwhelmingly gloomy about what lies ahead.

However it is that politicians, central banks and investors respond to the current “new mediocre” environment, it’s clear they must respond. Something’s got to give.