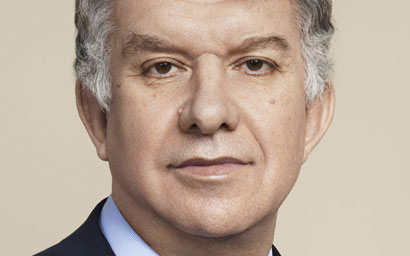 Yves Perrier, chief executive officer of Amundi, talks to David Stevenson about his plans for the company since it was floated last year.

When he was 18 years old, Yves Perrier had a choice between pursuing a career as a professional football player or going to business school. He chose the latter.

“I never look back,” he says, when the question of regret comes up. “I learned a lot playing football, it’s a good education. You try to do the best with your quality and be collective.

“What is the management of a company? Collectively, people work together in line with the interests of the company. It’s not fundamentally different.”

Some might say it was a wise decision, as Perrier now presides over the largest asset manager in Europe.

GROWTH TARGET
Amundi formed when the asset management arms of Credit Agricole and Societe Generale merged in 2010. In the early days, the firm had around €670 billion in assets under management, which has grown to around €1 trillion, a target announced in 2014 to be reached by 2017. How was this near-doubling of assets achieved?

Perrier says the original plan was for a mix of acquisition and organic growth. About a third of growth was planned through organic expansion, but in the end, it was achieved “quasi-exclusively by organic growth”.

But Amundi has been acquisitive. For example, in 2013 it gained a foothold in the US fixed income market by purchasing Smith Breeden Associates.

Perrier had always wanted Amundi to pursue a multi-asset, multi-client and geography strategy. He says the problem with an asset manager that has its strength concentrated in a single asset class such as fixed income is that it will always push bonds, despite difficult market conditions for the asset class.

“If you are a pure bond player, will you explain that currently bonds are not presenting a very good opportunity? Not possible,” says Perrier.

Last year’s initial public offering gave Amundi the firepower to drive through more acquisitions and earlier this year, the firm purchased a controlling stake in Kleinwort Benson Investors (KBI). KBI had €7.6 billion in assets under management, mainly in global equity strategies, with North American clients accounting for over half of the assets.

Perrier ultimately wants Amundi to be a ‘one-stop shop’ solution provider. “It’s clearly a choice of Amundi to provide the right solution in the context of the market. I’m not sure we will be the best, but we can be very honest with the clients,” he says.

The type of assets that the French giant can offer is varied. The firm has a passive offering – its exchange-traded fund range is in the top five in Europe in terms of assets under management. Amundi has developed real and alternative asset specialities, the latter including real estate, private debt, private equity, and delivered through direct investments and fund of funds. The liquidity of ETFs contrasts with the illiquidity premium offered by the alternatives plate.

Despite Perrier’s emphasis on organic growth with limited acquisitions, there’s one prize that frustrates the French firm: Pioneer Investments.

Six years ago, Amundi narrowly missed out on acquiring its Italian rival from UniCredit. Last month, Amundi confirmed to the Italian press that it was still interested in Pioneer, although denied it had offered €4 billion for the firm.

PERFORMANCE
Amundi had €80 billion of inflows last year and at the time of speaking had enjoyed €17 billion so far in 2016. “Compared to our competitors, the percentage growth of assets under management was the highest in the industry,” Perrier says.

The demand for Amundi products is coming largely from the firm’s international clients – Perrier says that of the €80 billion last year, 75% was international. Ninety-five per cent of this year’s €17 billion of inflows similarly has come from outside of France.

In France “customers don’t want an asset class, they want a yield”. He says that the main rival to the firm in France is not BlackRock or Axa Investment Managers, but products offered by insurance companies. Perrier supervises the insurance company of the group and says that it remains an attractive proposition to French clients because of its tax benefits.

In Amundi’s original domestic market, Perrier pushes equity products over French sovereign bonds due to the difference in yields – 4% for equity compared to 0.4% for bonds. He says this is in stark contrast to the market in the 1980s, where bonds could yield 10%.

GLOBAL CONTEXT
The firm wants its two main markets to be Europe and Asia and has “no major ambition in the US”. Amundi sells US fixed income in Europe and Asia but not the US.

Amundi has joint ventures in parts of Asia including China, India and Korea, which, when combined, amount to between €60-€70 billion of assets. Perrier says that the growth in Asia has accelerated over the past two years and attributes this to the growth of the middle class.

“We are surfing on the wave of the creation of the middle class [in Asia],” says Perrier. He’s not overly concerned with the well-documented slowdown in China, seeing clear parallels with what happened in Japan.

He likens China’s current predicament to Japan in the 1970s, which had very strong growth, but then the population grew older and the active population declined.

“China will follow the same trend as the slow or no growth happening now in Japan,” says Perrier, adding that the single-child policy in China may make this process happen faster.

Asked about the policies of central banks, he says “they’re the worst policy except all the others”. He concedes that European Central Bank stimulus policy has been a necessity as it prevented the Eurozone from “exploding” at a time of crisis, and also necessary in times of low inflation to bolster economic growth.

However, he thinks that the negative interest rate policies of recent times have gone a bit too far and are putting greater pressure now on costs. “Low interest rates will put pressure on revenues and drive consolidation of the industry,” the chief executive says.

Amundi has achieved a great deal since its inception and largely due to Perrier. While some targets remain frustratingly elusive – such as Pioneer Investments – Perrier has put the firm into the top ten asset managers in the world as being the European market leader.

As for what happens next: “We will continue to do the same, but try to do it faster and stronger.”