Weakness in the retail and investment banking sectors has caused asset managers to look more closely at the strength of their custodian banks and to seek assurances that their assets are protected from collapse.

Management consultants report a flurry of calls from investment firms who wish to gauge the financial stability of their custodians.

Dean Lumer, a partner at Morse, a management consultancy, says: “Clients of the banks want to make sure that their assets are in a safe home. They are looking at how their assets are held at the custodian and whether they are segregated from other assets and if they can be easily identified.”

A collapse in the custody sector, although not apparently likely, may not result in lost securities but could make it difficult for pension funds or asset managers to retrieve their assets while the bank goes through administration proceedings.

It could also severely restrict an asset manager’s ability to trade. Nick Baker, an executive director at Alpha Financial Markets Consulting, says: “If your custodian does go bust then you are in a lot of difficulty. It’s not that you would necessarily lose assets, as your assets should be in a segregated account, but it could take a long time before those assets are released.

“Also, if your custody and/or middle office go down then you would not be able to trade.”

But when it comes to cash rather than securities, this is a different matter. James Economides, a director at Amaces, a custodian benchmarking service, said that cash holdings were a critical factor. “The obvious and most critical risk is cash, especially for fund managers.”

Restrictions on investing
A lot of cash for mutual fund managers tends to stay on a custodian’s balance sheet, leaving it at risk. Pension funds are less exposed as they tend to ‘sweep’ their cash into money market funds, a separate legal entity, says Economides.

But the situation is different for mutual fund managers who have a number of restrictions on investing in other funds. A manager cannot necessarily sweep cash into money market funds, meaning money remains on the balance sheet of the custodian.

Focus is turning to the banks’ tier one capital ratios, which are a standard measure of a bank’s financial stability under Basel II legislation. The tier one ratio takes into account how much capital the banks hold in relation to how much money they have on loan or in other ‘risk’ assets. The greater the risk, the more capital that is needed.

But a number of custody banks, or the banking groups that own custody divisions, have taken capital injections in recent weeks to shore up their capital base.

State Street, one of the largest pure custody banks, took $2bn from the US Treasury under a voluntary capital purchase programme in October. State Street’s tier one ratio is 16%, a spokesman told Funds Europe. He added that the company is benefiting from investors who are shifting their assets away from commercial banks with large loan portfolios.

“Because of our focus on institutional investors and business mix, State Street is not subject to all of the risks that investment banks or typical commercial banks may face,” says the spokesman.  “Customer securities are held in a fiduciary or custodial capacity, segregated from State Street’s assets with ownership remaining with the customers.

“Stated another way, if a customer maintains custody of securities with us, that does not entail any risk associated with our financial condition.”

JPMorgan’s treasury & securities services division told Funds Europe: “In Q3 JPMorgan maintained strong tier 1 capital of $112bn, or 8.9% (estimated), above our target of 8-8.5%, as of September 2008.

“JPMorgan raised $11.5bn of common equity during the quarter to fund the Washington Mutual acquisition and to add to an already substantial capital base.

“The deposit base represents a consistent source of funding for the firm. Total deposits of $900bn represent balances both in our retail and wholesale businesses. Our retail bank is now the largest US depository institution, as of September 2008.” 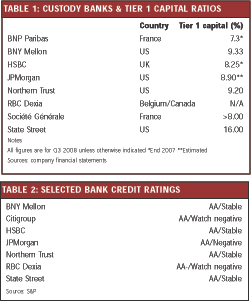 Well positioned
The firm says it feels “well positioned to handle the turbulent environment and, most importantly, to continue to invest in our businesses and serve our clients well”.

Joanna Meager, managing director UK, Ireland and Middle East, at RBC Dexia Investor Services, says financial strength and ratings will vary between custodians depending partly on their ownership structure. RBC Dexia Investor Services is owned by the Royal Bank of Canada and Dexia, but is independently capitalised. Meager says the business has its own capital ratio which “significantly exceeds regulatory requirements”.

She adds: “In the extremely unlikely event that one of our two shareholders was to experience operating difficulties, RBC Dexia would continue to operate on its own. In addition, it’s important to note that clients’ securities are segregated and, as such, are fully protected.”

Credit ratings
Credit ratings are also sought as a gauge of strength (see table 2). Meager says RBC Dexia’s credit ratings ­– AA- by S&P and Aa3 by Moody’s – are based on its standalone financial strength.

Morse, Alpha and Amaces all report an increase in concern among clients about the financial strength of their custodians following the recent spate of banking collapses. “There are a lot of rumours flying around,” says Baker, of Alpha. But he adds: “Global custodians are very big players and I honestly don’t think governments would let these guys go to the wall. They are so much part of the fabric of the market and also, importantly, provide services to governments.”

Yuill, at Investit, adds: “If a custodian bank were to fail it would be a calamity for the whole market, not just for their fund manager clients. Lehman Brothers was just medium sized compared to some of the custody banks out there today.”