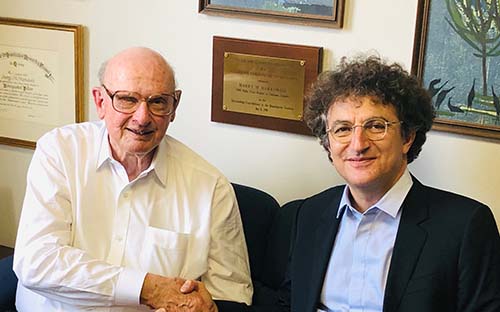 Last summer in New York, Yves Choueifaty (pictured right), who is president and chief investment officer of ‘anti-benchmark’ manager Tobam, met with Harry Markowitz, a recipient of the Nobel Prize in Economic Sciences.

It was Markowitz, born in 1927, who created the influential ‘Modern Portfolio Theory’.

Choueifaty is a mathematician and founded Tobam in 2005 based on his ‘maximum diversification’ approach.

The rationale behind meeting Markovitz was to better understand his work on optimisation techniques, his original modern portfolio theory and how his definition of diversification and the ‘efficient frontier’ – the set of portfolios giving the highest possible return for a given level of risk - could be applied to today’s markets and asset management practices.

Funds Europe caught up with Choueifaty about the meeting.

Firstly, can you explain modern portfolio theory to a beginner?

Yves Choueifaty: Modern Portfolio Theory (MTP) introduced the idea of a diversified portfolio, whose risk diminishes with the number of assets included.  One of its specific contributions was to summarize investors' attitude to uncertainty to a function of two inputs, expected return and risk: when two investments yield the same return, the preferred one will be the less risky. Harry Markowitz created the tools used to trace the so-called “efficient frontier”, the set of the best possible combinations of assets or, put more simply, the ones that bear the lowest possible risk for all feasible levels of returns.

Why do you consider it to still be relevant?

Yves Choueifaty: MPT is basically the operating system for all current portfolio management. Various people built upon it but the core foundations are those laid out in 1952 in Harry Markowitz’s founding research paper.  Every portfolio manager nowadays is still using Harry’s Markowitz Modern Portfolio Theory to construct portfolios.

To ask if H Markowitz’s theory is still relevant to finance practitioners might suggest you had your doubts. Did you? And why?

Yves Choueifaty: We deeply believe in diversification as a general principle, and we use Markowitz’s suggested measure (covariances, i.e. dispersion to the mean) as a central input. We know however the impact of errors on expected returns dwarf those made on risk, and our process is agnostic to them.

Is there a common criticism of MPT that you hear most, and what is it?

Yves Choueifaty: A common criticism is that variance, the measure of risk used by Markowitz, is a bad proxy for investor’s preferences. Other measures that focus on asymmetry, or extreme values could yield better behaved portfolios.

Why is it wrong?

Yves Choueifaty: Variance is a measure that has solid theoretical grounds in the economics of uncertainty, on the one hand, and uses all the information available in the history of returns on the other.  Working with different measures is often more convoluted, and ultimately almost always less robust. Our view is that the information present in covariance matrices is enough to build competitive allocations.

One concept that has been suggested is that ‘contrarian/value investors don't buy into Modern Portfolio Theory as it depends on the Efficient Market Hypothesis and conflates fluctuations in share price with "risk". This risk is only an opportunity to buy or sell assets at attractive prices in as much as it suits one's book.’ How do you respond?

Yves Choueifaty: There is no link apparent between the MPT and the EMH: Markowitz’s research predates the efficiency hypothesis by ten years, and says nothing about aggregation of expected returns – everyone can have their own subjective returns and risks trade-offs.

The second aspect, that price fluctuation is not risk, is out of the scope of the original theory which stops at a single period investment. In practice, for the same level of return at the end of the investment period, investors will prefer a smoother path. For example, when facing unexpected early outflows (or even termination) – the MPT says nothing else.

To the modern pension fund, diversification means investing in private markets alongside traditional assets. Does MPT support this view?

Yves Choueifaty: Liquidity is not an issue in the original formulation of the MPT.  The risk/return characteristics of private investments are more difficult to assess due to the lack of market prices, so they are not a natural fit without additional hypotheses. The extent to which the return they offer over transparent assets is real or merely an “accounting premium” is still debated in the literature.

Finally, how did you come to meet H Markowitz?

Yves Choueifaty: Tobam founded the Maximum Diversification approach. However, we consider ourselves as the continuation of Harry’s work. He laid the ground for us and for the industry to build on, and when he says “the only free lunch is diversification” this clearly echoes Tobam’s investment philosophy.

Spending two days with Harry in his San Diego office, getting the chance to been introduced to his library, to his current work, was a great honour and to be honest a deeply touching moment in my career.