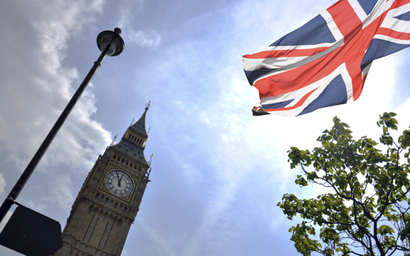 The drop in the value of sterling and deteriorating investor confidence are driving Britain’s share of international investment funds to new lows, according to a survey of 250 international funds with a combined $450 billion (€402 billion) of assets under management.

The UK’s portion of global equity funds has dropped to 7.87%, surpassing lows immediately after the Brexit referendum in 2016, according to the survey by Copley Fund Research.

Britain’s share of global equity portfolios is now the lowest it has been since the survey began in 2011 when the share was 11.5%.

While London attracts a larger share of international funds than any other European exchange, allocations have been increasing to Switzerland, Germany and the Netherlands, with Dutch holdings hitting a record high in July.

“We’re seeing a marked shift out of Britain and into mainland Europe by international fund managers,” said Steven Holden, chief executive of Copley.

“The weakening pound is certainly the major contributor to the decline in UK stock allocations but it reflects caution over Brexit from an equity perspective too.”

Among the hardest hit by the shift out of UK equities are financial stocks, such as HSBC Holdings and Barclays, along with telecoms giant Vodafone.

Faring better are consumer staples businesses that tend to outperform in a recession, particularly those with a high proportion of customers outside of the UK, including Unilever, Diageo and Reckitt Benckiser Group.

By contrast, in the Netherlands, allocations have increased across the board, with the largest flows going to Heineken, ASML and NXP Semiconductors.

“Rather than investing in UK domestic stocks, investors are choosing high quality, well run global companies that are listed in the UK, but receive most of their earnings outside of Britain,” said Holden.

“These companies have the added advantage of benefiting from the falling pound in the run-up to Brexit.”