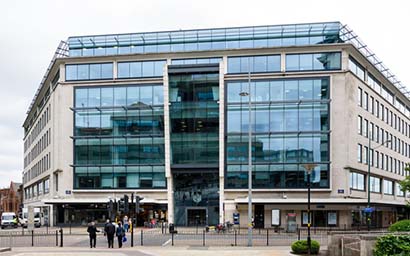 The purchase of 2 Colmore Square and neighbouring Cannon House (pictured) was described as the “largest” office investment deal in the city this year.

RPMI Railpen paid about £95 million (€106 million) for the two interconnected Birmingham office blocks and the seller, Nurton Developments, got a yield of 6.4% on the sale.

The property, which includes shops on the ground level, is 95% occupied and tenants include Shoosmiths, Jacobs UK, Energy Systems Catapult, the Secretary of State, and Handelsbanken.

Anna Rule, head of property at the asset manager, said: “We are delighted to have exchanged on this significant Birmingham asset.  The building’s proximity to the new HS2 Curzon Street station, the low rents and the asset management opportunities that exist provide long-term opportunities for growth.

“This purchase meets all of our core investment themes and will help to meet our mission to pay members’ pensions securely, affordably and sustainably.”

In an another office property investment described as the largest of its kind and announced this week, fund manager Invesco Real Estate said it had signed the largest single asset deal in its European history with the purchase of a Paris building called Capital 8 for €789 million.

The deal, which will not close until the fourth quarter of the year, covers 45,000 sqm on a 1-hectare site. The seller is Unibail-Rodamco-Westfield.

Rental growth in the European office sector has been strong and the outlook for the next 18-24 months was good, according to the ‘Mid-year 2018 investment strategy annual’ by LaSalle Investment Management.

LaSalle also said real estate in the UK continued to “exceed the expectations set in the aftermath of the country’s Brexit vote”, driven by an abundance of liquidity, opportunities in urban logistics and factors such as the demand for serviced office space in London.