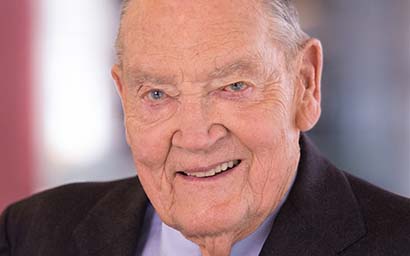 The legendary investor and founder of Vanguard Jack Bogle died on Wednesday at the age of 89 in Pennsylvania.

Bogle launched the first index mutual fund for investors and was instrumental in driving down costs across the mutual fund industry by campaigning in the interests of investors.

With assets under management of US$5 trillion (€4.4 trillion), Vanguard is now the second largest investment management firm in the world.

“Jack Bogle made an impact on not only the entire investment industry, but more importantly, on the lives of countless individuals saving for their futures or their children’s futures,” said Vanguard chief executive Tim Buckley.

“He was a tremendously intelligent, driven, and talented visionary whose ideas completely changed the way we invest. We are honoured to continue his legacy of giving every investor ‘a fair shake.’”

Bogle began his career in 1951 after graduating in economics from Princeton University. His senior thesis on mutual funds had caught the eye of fellow Princeton alumnus Walter Morgan, who had founded Wellington Fund, the nation’s oldest balanced fund, in 1929 and was one of the deans of the mutual fund industry.

To describe his new venture, Bogle coined the term “The Vanguard Experiment.” It was an experiment in which mutual funds would operate at cost and independently, with their own directors, officers, and staff—a radical change from the traditional mutual fund corporate structure, whereby an external management company ran a fund’s affairs on a for-profit basis.

“Our challenge at the time,” Bogle recalled a decade later, “was to build, out of the ashes of major corporate conflict, a new and better way of running a mutual fund complex.

“The Vanguard Experiment was designed to prove that mutual funds could operate independently, and do so in a manner that would directly benefit their shareholders.”

In 2004, Time magazine named Mr. Bogle one of “the world’s 100 most powerful and influential people” and Institutional Investor magazine presented him with its Lifetime Achievement Award.

In 2010, Forbes magazine described him as the person who “has done more good for investors than any other financier of the past century.”