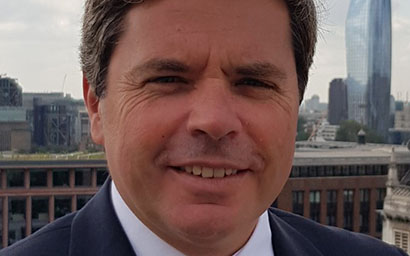 Fees paid by retail investors who invest in funds with ‘clean’ share classes have significantly dropped since 2016, research shows.

The ongoing charges figure (OCF) for many cross-border European funds investing in equities has fallen by 7% while assets have climbed 86% over the period, according to research by Fitz Partners.

Hugues Gillibert, chief executive of the firm, said the success in lowering fees while increasing asset sizes was down to economies of scale gained by clean share classes that have gradually been introduced over the period studied.

“It should bring some comfort to our industry to see that, thanks to economies of scale, the substantial growth in retail clean classes’ asset size translated into a 7% drop in their OCF,” said Gillibert.

However, Fitz Partners - which researched funds domiciled in Ireland and Luxembourg – still found an increase in assets and a reduction in OCFs for funds where distribution charges were still bundled into the overall cost, although the fee reductions were much lower.

The bundled share classes saw assets rise by 25% and the average total fee drop by 1%.

MiFID II, along with the UK’s earlier Retail Distribution Review, pressured fund manufacturers to unbundle their fund costs so that investors could clearly distinguish between management costs and commissions paid separately to intermediaries, such as fund platforms or individual financial advisers.

Equity OCFs with clean share classes were shown by Fitz Partners to have come down from 1.13% to 1.05% on average - an 8-basis point drop and 7% reduction in total costs. Average management fees remained unchanged at 0.82%.

Meanwhile, the average OCF for bundled share classes dropped by just 2 basis points from 1.89% to 1.87%, which translates as a 1% decrease, whilst the management fees remained stable at 1.52%. 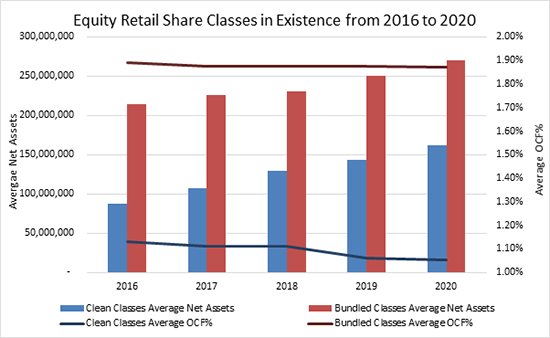 Gillibert said: “One of the main driving forces behind the present reduction of overall fund fees in Europe remains the lower price points applied to the newly launched funds.”

He added: “Our new research shows that, when considering funds in existence over a four-year period, management fees have remained stable. However, when the level of assets held in the share classes rises, especially for the smaller clean classes at the beginning of that period, OCFs or total costs can drop significantly.”

According to Gillibert, retail bundled share classes would not show the same level of reduction in their OCFs given the more substantial size of these units at the start of the period and their lower growth, but they still offered a 1% reduction in OCF over the same period.

However, Europe’s fund management trade body, Efama, recently cautioned against rapidly changing the bundled fee model, which is considered to be more widely used in the EU than in the UK. Using research also from Fitz Partners, Efama said retail investors were paying only “small amounts in absolute terms to fund management companies to get a reasonable return on their long-term investment, and to distributors to have access to professional financial advice”.

The trade association said that in countries where advice fees have been unbundled from fund management fees, there was no guarantee that the cost of advice would fall.

Gillibert said he agreed, adding that other costs - such as external advice that would be paid directly by investors in clean share classes - would not automatically translate into a net overall saving for the investor.

“Our present research does not present the superiority of one model of fund distribution but it does show that economies of scale are actually passed on to investors when we are in the presence of large increases in share classes’ assets, and that is very positive for investors.”

As part of the UK’s Assessment of Value regime, which was introduced in 2020, fund managers in the UK are currently expected to report any benefits passed to investors from gaining economies of scale in their funds.