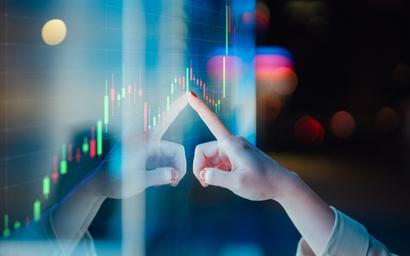 Investors are turning to bond exchange-traded funds (ETFs) amid a broader drop in flows towards exchange-traded products (ETPs), research by BlackRock iShares has found.

Flows into global ETPs fell by 38% in November, while European equity ETP outflows of $1.7 billion were the largest since August.

But investors made a show of confidence to fixed income ETFs.

November’s global ETF flow report stated: “High yield, which was on track for a record outflow year, with a cumulative outflow of -$21 billion as recently as 21 September, is now only -$5 billion out for the year. Meanwhile, investment-grade flows have risen to $36 billion for the year, from $23 billion as of 21 September.”

“European equity net flows are now at -$16.5 billion year-to-date, including a cumulative -$27 billion outflow since March, versus net selling of -$27.2 billion over 2021.

“Investors have been turning away from broad European equities – November’s outflows were primarily out of large caps – but pockets of selectivity persist,” the report said.

Sustainable inflows picked up in November, with $7.3 billion added across US- and European-listed ETPs.

Within Europe, fixed income accounted for most sustainable flows.

In November, $3.7 billion was added to these strategies, marking the highest monthly inflows for the asset class this year, outpacing July’s $3.6 billion.

European flows increased from $4.2 billion in October to $6.5 billion in November, while the US reversed the previous month's net outflows to post $739 million of inflows in November.

Global ETFs industry saw an increase of 6.2% in net inflows in October

Fixed income flows were mainly driven by ESG “best-in-class strategies” ($3.4 billion), split across the eurozone, US and global exposures.

Equity flows in Europe matched 2022’s monthly average, at $2.8 billion, and were also largely driven by best-in-class strategies ($1.5 billion), led by US and global exposures.

In the US, sustainable inflows were dominated by equities ($663 million), led by ESG optimised ($219 million) and climate-exclusive strategies ($206 million).