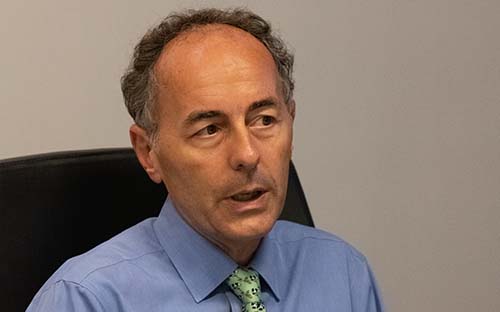 Jan van Eck, the chief executive of New York-based asset manager VanEck, says he is concerned by the high concentration of shares in American companies that belong to the world’s largest asset managers.

He warns there is a “whole cottage industry of lawyers” looking at this and that the issue will become political.

VanEck was speaking at a Funds Europe roundtable held in New York before Christmas and published online recently.

Here are some of the excerpts from the discussion, which among other participants also featured Greg Ehret, the chief executive officer of PineBridge Investments, and Marc Brookman, the deputy chief executive, North America, of Schroders.

Funds Europe – Do people trust the funds industry and what needs to be done to improve trust?

Jan van Eck – I have to give my idiosyncratic answer to this. My biggest concern about the fund industry is the concentration of ownership of corporate America. The top four asset managers – State Street, Vanguard, Fidelity, BlackRock – own 20%-plus of the stock of a lot of public companies and it’s going to be a big issue at some point, period. It’s because their ownership is increasing as their market share increases, and it’s going to be a political issue. It’s on the fringes, but I can tell you that there’s a cottage industry of lawyers, law professors and some economists talking about it. No one, I think, wants those companies running corporate America.

Where the rubber meets the road is that for antitrust purposes, if one owns over 5% of a company’s stock, one has to be ‘passive’, but I don’t always know what that means. The concept of passive has gotten very confused these days because boards are meeting with big shareholders, whether active or passive, talking about ESG and all kinds of different topics, and it’s not transparent what’s going on there, and it’s potentially conflicted.

So, I just think that politicians will come in one day: that’s one of my concerns. I don’t have a proposal, but I do think the industry has got to figure out what appropriate behaviour is.

Read the roundtable: The better side of Wall Street

Funds Europe – Looking at markets at present [late 2019], what do you feel are the risks we are facing and where do you see upside?

Jan van Eck – I would say the things that concern me actually are the ECB [European Central Bank], bond markets and negative interest rate policy, and the struggle that the ECB has with trying to stimulate its economy and where that all ends.

I would combine with that - which is something that’s not discussed at all - the US fiscal deficit, which is really tremendous. People talk about late-stage recovery, but what’s crazy about where we’re at is how much money the US government is spending, given where we are in the economic cycle.

Funds Europe – In the last year, what investment areas and types of product have seen the most momentum?

Jan van Eck – I think, again from my more US perspective, it was really the risk-off mentality dominating; it came after a tough fourth quarter in 2018, so it is a little bit understandable at the beginning of the year.

Then in the summer, the absolute collapse in yields I think frightened ‘informed investors’. Whatever it is, you could be justifiably conservative, but it’s the same issue that I’ve seen in portfolio construction since the financial crisis. So much money was left on the table because people were saying, ‘Lets go into short-term municipal bonds or short-term instruments,’ because it makes you comfortable and at my quarterly reviews I’m not going to have to apologise for anything, and I think it really led to a lot of money being left on the table.

Funds Europe – Looking solely at the North American market, do you anticipate any changes in the dynamics of the market and investor needs?

Jan van Eck – [In response to a point about the rise of passive investments in client portfolios, and the need for more active-share in active portfolios] Maybe for big active shops, but in my next life I want to be an active manager, just give me five or ten stocks I can own. There are so many companies that are under-researched right now. The sell-side is just getting weaker by the year. I don’t know when that changes the overall dynamic, but I think that would be really fun!

Funds Europe – If there’s one thing you’d like to change about the funds industry, what is it?

Jan van Eck – Scepticism. I feel like we fall into paradigms of the ways of thinking about the market right now. I’ll give you an example: growth versus value. So, there was a study 20 years ago that said that value always outperforms and those huge asset managers that are biased towards value. Yet growth has beaten value for many years. I don’t think anyone knows why. I don’t know why, and I really don’t believe anyone has sufficiently explained it. Just because one study came out or it worked for 30 years, doesn’t mean it’s going to work for the next 20. The financial markets reflect a changing world, let’s just be a little bit more broadly sceptical about the future.

VanEck: The maturity of EM debt