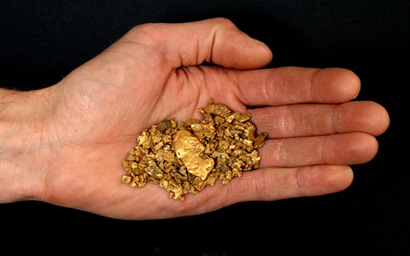 Overall global demand for gold rose 2% last year, reaching 4,309 tonnes, the highest level since 2013. As an investment gold was up by 70%, largely driven by inflows into gold-backed exchange-traded funds (ETFs), which accounted for 532 tonnes.

Inflows into gold-backed ETFs were the second-highest year on record, according to the World Gold Council (WGC), driven by investor concerns over future monetary policy, geopolitical uncertainty and negative interest rates.

The overall investment demand (including for physical gold) was at a four-year high.

Despite the price dip in November, there was a strong recovery in the physical gold market, but it didn’t offset weak demand in the first three quarters of last year, which resulted in a 2% decline compared to 2016.

The two biggest importers of gold, China and India, saw appetite for the precious metal wane last year, with demand dropping by 21% and 7% respectively.

But according to Alistair Hewitt, head of market intelligence at WGC, investment demand should continue into this year.

“With an equally uncertain political and economic environment likely in 2017, we expect investment demand to remain buoyant,” said Hewitt.

Earlier this week there was an annual competition to predict the price of gold by the end of the year. The previous winner, UBS’s Joni Teves, made the most bullish prediction of $1,350 (€1,251) per once.