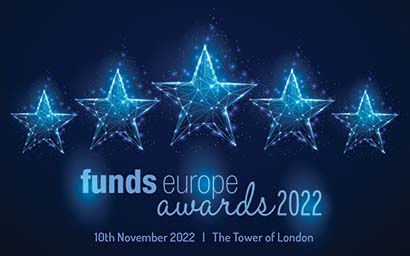 Colin Purdie, who is CIO for liquid markets at the asset manager, was one of two personality awards celebrated in the annual event that recognises business excellence in the European cross-border funds industry.

The Funds Europe Awards returned to its traditional venue at The Tower of London after two years, during which the awards ceremony was held virtually.

The event was hosted by Samira Ahmed, the journalist and broadcaster whose work mainly covers BBC television and radio.

Joining Colin Purdie in being honoured for individual achievement was Thomas Richter, the head of the German investment funds association, BVI.

Thomas Richter was nominated as the Funds Europe European Personality of the Year for his vociferous campaigning over issues such as investor information and the high costs of market data.

“These two personalities were among a number of nominations that really stood out to our panellists as industry leaders who are definitely chief among their peers,” said Nick Fitzpatrick, editor and co-publisher of Funds Europe.

Other winners included JP Morgan Asset Management in the large asset manager category, and BNP Paribas for the European Custodian of the Year award.

Funds Europe’s awards are made in a number of categories, including asset managers and service providers. They include awards for thought leadership and diversity & inclusion.

Candidates for the company awards, in most cases, put themselves forward and are decided on by an independent panel of judges.

David Wright, head of business development and co-publisher of Funds Europe, said: “We are once again grateful to our judges for playing a crucial role in keeping our awards independent – a factor that makes a Funds Europe award really worth having.

“I also want to say a massive thank you to our sponsors for making this event probably our best yet after we returned to The Tower of London following a two-year hiatus due to Covid-19.

"It was great to see many familiar faces over afternoon tea and in such a fascinating setting by the River Thames!”

Judges are split into several panels.

Not all judges judge every award.