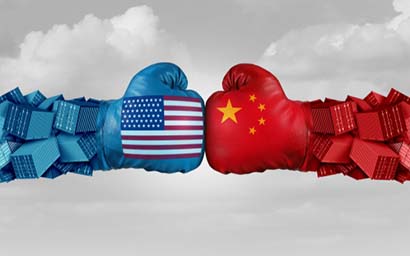 When the US increased sanctions against China increased earlier this year, it showed how the ETF industry can be vulnerable to government policy.

Benchmark providers revised listings, removing various Chinese companies from indices, while ETF providers such as BlackRock and Vanguard had to offload billions to comply with the new restrictions.

Geopolitical tensions are to be expected when investing in emerging markets. “It’s the nature of the beast,” says Mark Fitzgerald, head of product specialism at Vanguard, speaking to Funds Europe for the latest edition of the ETF report.

Vanguard was heavily impacted by the sanctions as it had significant exposure to the Chinese market.

The Vanguard FTSE Emerging Markets ETF had more than 40% exposure to the Chinese market, while the Vanguard Total International Stock Index Fund was reported to be one of the largest fund allocators to four of the blacklisted firms before the selloff.

“A lot of people don’t think through all the ramifications of it, but the whole idea of using indexes as policy tools is something that we don’t think appropriate, and it’s a little bit misplaced as people don’t appreciate where the index providers sit in the value chain,” he explains.

Sanctions can cause even more difficulties for bond indices, says Redding. Due to the lack of transparency, it can be hard to ascertain if a subsidiary is affected by sanctions against a specific company, or whether it is only the parent company affected. “It’s a very complex situation, there’s no doubt about it,” he adds.

According to Annie Shum, institutional business deputy head at Hong Kong-headquartered CSOP Asset Management, Sino-US tension is an ever-present issue. “Even with Joe Biden now in office, it is looking unlikely that the sanctions put in place by his predecessor would be retracted,” she says.

Shum highlights that while the sanctions have spurred US financial institutions and investors to revise their portfolios and trading practices, they failed to “cause a dimple to the Chinese equity market”.