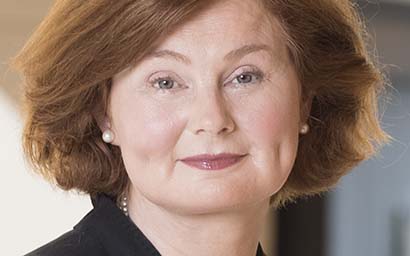 The European Securities and Markets Authority (Esma) has appointed a director of the Central Bank of Ireland to its seven-person management board.

The appointment of Derville Rowland (pictured) is potentially significant for the funds industry, given the growing importance of Ireland as a fund domicile and the fact that neither of Europe's two largest fund domiciles – Ireland and Luxembourg – are currently represented on the pan-European financial regulator's management board.

Rowland will replace outgoing board member Klaus Kumpfmüller of Austria’s financial regulator the Finanzmarktaufsicht, whose term has come to an end. Rowland will serve a 2½ year term on Esma’s management board commencing in June.

The board will then consist of:

Rowland has been the director general for financial conduct at the Irish Central Bank since September 2017 and is responsible for overseeing consumer protection, securities and markets supervision, and enforcement.

She joined the Central Bank of Ireland in 2004 to set up the Administrative Sanctions Procedure and was appointed head of enforcement in 2010.