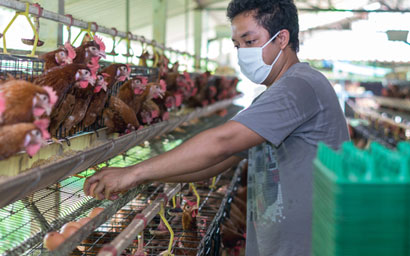 FAIRR, which has members managing $3 trillion (€2.5 trillion) of assets including the Strathclyde Pension Fund, says that antibiotics and broader issues associated with poor Asian food safety and environmental standards pose a major risk to chains like McDonald’s and KFC.

Antibiotic usage in Asian chicken and pigs is projected to increase over 120% by 2030, despite a global push to reduce the presence of antibiotics in livestock, said FAIRR.

Jaideep Panwar, manager of sustainability and governance at APG Asset Management Asia, said investors needed to keep “a close eye” on the long-term risks of food assets in Asia.

“Investors will assess the ability of companies in the meat supply chain to position themselves ahead of these risks,” said Panwar.

Three years ago the supply of expired meat from Shanghai resulted in a $10.8 billion loss of market-cap for McDonalds, while Yum! Brands Asia is still “beset by food safety scandals” such as dioxin-tainted eggs in Taiwan, said FAIRR, a group created by private equity investor Jeremy Coller.

Asian factory farming is “booming” due to a predicted 19% growth in Asian meat demand. Chinese meat and feed producers such as New Hope Group and Wen’s Group now among the ten largest animal feed manufacturers globally.

In addition, half of seafood in Asia is now produced in intensive factory farms, said FAIRR. However, Asia’s meat, seafood and dairy industries face a range of badly managed sustainability risks including food safety, antibiotic overuse and environmental risk.

Well-known meat substitute producer Quorn is owned by Asian business Monde Nissin and reported “unprecedented” global growth in the first half of 2017 with sales up 19% worldwide, said FAIRR.

Coller said: “Investors have a big appetite for Asia’s animal protein sector. But growth is driven by a boom in factory farming which tends to mean more emissions and more epidemics, abuse of antibiotics and abuse of labour [which are] all risks to returns.”