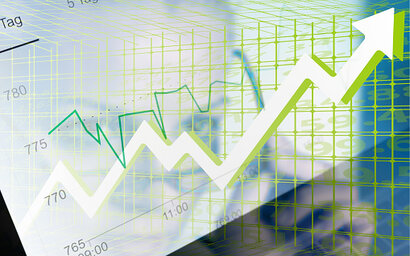 Industrywide net sales of Ucits and Aifs surged in November to their highest level of 2022, at €53 billion, according to the latest data from the European Fund and Asset Management Association (Efama).

This reflected a surge of 1666% from the month before when net sales were just €3 billion.

Overall this was the highest month of net sales recorded in 2022, with outflows recorded throughout most of the year, aside from August.

Ucits dominated much of the traffic in November with €44 billion of net inflows, compared to a net outflow of €71 billion in October.

Reversals of fortune were most noticeable in long-term Ucits (excluding money market funds or MMFs).

In November, these recorded net inflows of €1 billion compared to net outflows of €53 billion the month before.

Sentiment also improved towards other strategies as outflows slowed.

Net outflows for multi-asset funds decreased from €14 billion in October to €7 billion in November.

This reflected a shift away from Ucits MMFs, where net inflows fell from €124 billion in October to €43 billion in November.

Efama found that investors’ demand for Aifs also rebounded throughout the month.

Aifs reported net inflows of €9 billion in November, compared to net outflows of €79 billion the month before.

Bernard Delbecque, senior director for economics and research at Efama, commented: “Hopes that interest rates have approached their peak led to a rebound in investor demand for bond funds, whereas net outflows from equity funds were reduced to almost zero amidst renewed optimism toward stock markets.”

Overall, total net assets for both asset classes increased by 2.2% in November to €19.7 trillion.

Country-wise, the highest net sales of Ucits were recorded in Ireland, with €19.2 billion.

Germany was responsible for the highest net sales of Aifs with €10.7 billion.