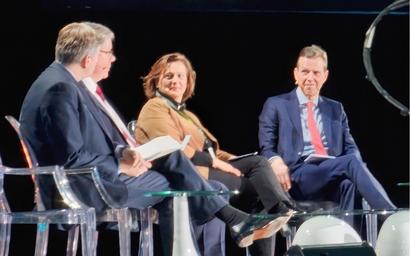 How general partners (GPs) anticipate market developments, interest rates, inflation, FX variations, regulatory changes and more was the synopsis of the first roundtable on day one of ALFI's Private Assets Conference in Luxembourg.

Private equity (PE) growth in the last ten years has bloomed, but has the music stopped?
Deal volumes in Q3 are down by 60% compared to 2021, remarked Claus Mansfeldt, chairman and managing director of SwanCap, president of the LPE.

Regarding private equity, performance is "relatively" good in absolute turns, continued Mansfeldt. Even if private markets are down 20%, "PE is close to flat".

Is the current environment a good opportunity for secondaries?
Remco Haaxman, partner, investor relations, Coller Capital, said he is excited about the possibilities for secondary investors.

However, the denominator effect is happening, he warned. "Over-allocation means investor programs will slow down or pause."

Yet, the primary market has grown in recent years, he added, meaning the secondary market will show lots of growth. The market for secondary transactional volume in 2021 hit €130 billion, highlighted Haaxman, but sellers and buyers are not finding each other "adequately".

The economic environment for GPs in Latin America
Emmanuelle Yannakis, founder partner and CFO, Blue like an Orange, remarked that Latin America had experienced a "resilient" economy in recent years. "It is less impacted by the Ukraine-Russian war and the increase in food prices," she continued.

"As GPs, we have to face new challenges," stressed Yannakis. Liquidity difficulties and profitability retention are good examples, she said. "Exporters have to deal with price inflation. There are also currency challenges—we've been able to assist funders based in Europe to invest in the region and deal with volatility."

With interest rates increasing, inflation and recession, will investment strategies be adjusted?
There is no change, claimed Mansfeldt. A steady pace of investment is the "best way to go". He also added that the recession is not a central concern for GPs. Inflation, however, is a big concern, he added, given the drop in consumer demand.

The denominator effects impacting alternative investors
Higher interest rates are concerning, rued Haaxman. "The beauty of secondaries is that assets can be priced and re-priced." Interest rates hikes have existed before, he continued, and despite the challenges, it's "important" for investors to see opportunities, particularly in the secondary market.

How LPs are reacting to Article 9
Yannakis stated that ESG is key to success in Europe but added that climate-focused funds are "not significant" for the US market. However, Article 9 funds are challenging in Latin America; "we have a European view of what's impactful", she said.

"It's important European commissions are discussing the ability to fund and help emerging markets in Latin America," she concluded, highlighting the "strong" investment process.

The retailisation/democratisation of private equity
Mansfeldt said it is a "new wide space" for PE investing. "We have a minimum investment size of €1.5 million," he added, "which captures wealthy people, all institutional." There is a less affluent market there, too, he added. "Lots of people working with PE can have a real choice."

Haaxman concluded the roundtable by stating that it's opportune if the private equity market can be opened further. "Any large GP will try to capture that."