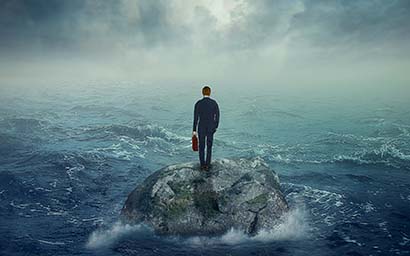 Designed to provide greater diversity and liquidity with lower volatility, multi-asset strategies have been a hit with European investors as they face the end of quantitative easing (QE). Research from Greenwich Associates reveals that the share of European asset managers buying ETFs for use in multi-asset funds increased to 80% in 2017 from 63% in 2016, while figures from the European Fund and Asset Management Association show €82 billion tumbling into multi-asset funds in the first half of 2018.

So, did multi-asset funds do what they say on the tin and protect investors during the mini-crisis in early February, when two funds blew up after a spike in the Chicago Board Options Exchange Volatility Index (VIX)? And given the likelihood of more volatility as QE unwinds, what are the lessons to draw from that mini-crisis?

The mini-crisis has shaken off the complacency that inevitably develops after 10 years of artificial calm on the markets – an artificial calm that allowed investors to take a lot of risk on the downside, according to Serge Pizem, global head of multi-asset investments at Axa Investment Managers. That’s now changing, and one of the first lessons to draw from the mini-crisis for Pizem is: don’t short volatility.

“When a fund loses 90% of its NAV in one day, it’s obvious that they had huge leverage and no control,” he says. “It was a red card saying, ‘This is dangerous.’”

As Axa IM is long volatility in all its multi-asset classes, Pizem says he would never short volatility.

“You are just doubling up, and if a shock happens you’re going to have a double hit on your asset allocation and then on the volatility side. You’re not going to have any liquidity if a crisis bites like the one we had.”

Which brings us to another lesson from the mini-crisis: pay attention to liquidity.

“Liquidity is an issue in all markets except equities and currency,” says Pizem. “It’s tough to find liquidity, especially in fixed income.”

Against this challenging background, did multi-asset funds weather the crisis and protect their investors? Well, some did, and some didn’t.

“There has been dispersion in the performance of multi-asset portfolios in 2018,” says James Elliot, chief investment officer of the international business of JP Morgan Asset Management’s multi-asset solutions team. “The multi-asset funds that fared better were able to flexibly adjust their exposures and even take advantage of the volatility experienced earlier this year, for example by buying volatility futures.”

Canary in the coal mine
Performance in the mini-crisis was obviously partly a question of style, but there were also certain universal variables that made a difference.

“Whilst styles and objectives vary, the key calls have been around broad risk positioning as volatility has returned, as well as positioning across equity regions with the US outperforming emerging and European equities,” says Dominic Byrne, director and multi-asset investment strategist at BlackRock.

The VIX crisis acted as a canary in the coal mine. Prior to the blowout, the most complicated challenge for multi-asset managers was lack of diversification benefits in a context where there were “potential correlation shocks arising from a less benign macroeconomic environment coupled with idiosyncratic political shocks, layered on top of a less accommodative monetary stance”, says Olivier Marciot, manager on Unigestion’s multi-asset Navigator fund. The watchword to survive when the mini-crisis hit in February was nimbleness.

“The VIX complex’s blowout in February effectively proof-tested many diversified strategies and their ability to adapt to rapidly changing market environments,” says Marciot. “Under these circumstances, the strategies that stood up well were those that could be active and dynamic, in addition to being diversified alone.”

BlackRock’s Byrne concurs, suggesting that maximum freedom makes it easier for multi-asset portfolios to weather storms. Freedom from benchmark constraints, such as being mandated to hold a fixed allocation in fixed income, helps multi-asset funds to capture investment opportunities but also allows the manager to build multiple defensive strategies into portfolios.

“This helped us when we navigated the financial crisis and has also helped in more recent periods of volatility such as earlier this year,” says Byrne. “No crisis or period of volatility is the same, but the ability to retreat to cash has regularly helped us dampen portfolio volatility, particularly when there are concerns that market stress is likely to be elevated and the team have concerns around the ability of bonds to generate strong returns or diversify risk.”

How, then, do multi-asset funds achieve this flexibility – which is starting to look essential as volatility returns to markets?

For Marciot, it’s in the construction. The Navigator fund investment process combines a long-term enhanced diversification portfolio that aims to collect a wide range of traditional and alternative risk premia with a large-scale dynamic component whose objective is tactically to adjust the long-term asset allocation in line with prevailing market conditions.

“For us, nimbleness is at the very heart of our investment process and represents at least one third of the overall risk budget,” Marciot says.

At BlackRock too, “nimbleness is baked into the product design and investment process” for the BSF Dynamic Diversified Growth Fund, says Byrne. This requires a close relationship between research and portfolio managers, as well as a regular assessment of all research in portfolios.

“We regularly update portfolios with new research to validate current positions and introduce fresh ideas,” says Byrne. “Also, we routinely lock ourselves away for a day every quarter to scrutinise the key investment themes that drive our positions.”

Anchored
Constant vigilance is also the name of the game at JP Morgan AM. A set of eight macro themes creates a medium-term anchor for the portfolio, but the team continuously monitors the macro landscape and any shifts in the market environment, and the investment process allows investments to be changed at any point in time.

“This provides the ability to rapidly adjust exposures, to take advantage of short-term opportunities and to seek protection from potential risks in order to deliver positive returns in different market environments,” says Elliot.

The ability to move quickly is essential during a crisis. With the February mini-crisis, it was perhaps possible to see trouble ahead.

“One could see the springs getting tense, that there was an issue with volatility because it was so low, and it didn’t take much to make the spring unwind,” says Pizem. “Then we had this very violent crisis, and all of a sudden people realised that it is extremely dangerous to short volatility.”

Multi-asset managers took various approaches to weathering the storm. For Pizem, it was largely a question of deciding when to take profits.

“As we were long volatility, the issue was: how long is this crisis going to go on?” he says. “We didn’t change the asset allocation too much because it is driven by six-month to one-year macroeconomic views and that doesn’t change because you have a crisis on liquidity – unless it becomes systemic and destroys real value.”

Also beneficial for Axa IM’s multi-asset strategies was the tail risk hedging that was in place. This requires sacrificing a little bit of performance, and 95% of the time the premiums expire, says Pizem, but combined with being diversified and thinking about “known unknowns” – such as the Italian election in March – these deep tail risk hedges help to mitigate the downside.

“When February came, it was our tail risk hedging that really paid out,” he says.

Unigestion also saw the crisis coming, though it reacted differently.

“Our tactical assessment of the market environment became increasingly worrisome in January, which led us to substantially reduce our exposure to credit first, and then followed by equities, alongside reducing the overall beta of the portfolio and build up a large hedging book made of options on various stock and volatility indices,” says Marciot.

By March, however, things had changed again – underlining the importance of flexibility. In March, the main driver of returns was diversification rather than dynamic asset allocation, says Marciot, with bonds and defensive currencies offering the much-needed defensive features when the brewing trade started to affect equity markets.

“In our opinion, it is essential that multi-asset portfolios are able to combine asset allocation with tactical decisions to take advantage of all market phases,” he says.

The February crisis is over, but no one expects calm waters ahead. Like many firms, JP Morgan has a base case that there are no current imbalances in the global economy to suggest recession is around the corner. But, says Elliot, with global monetary policy past the point of maximum accommodation and as we progress through the later part of the business cycle and closer towards a recession, volatility has the potential to pick up to more sustained higher levels in the next 12-24 months.

“Flexibility and diversification will remain critical for navigating increasing bouts of volatility,” he says. “However, volatility can lead to greater market mispricings of macroeconomic trends, therefore creating investment opportunities for portfolios that have the ability to flexibly adjust exposures and draw on a broad opportunity set of traditional and idiosyncratic risk premia.”