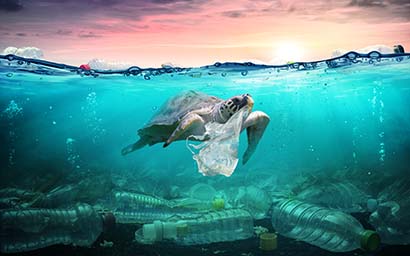 According to Douglas Adams, author of The Hitchhiker’s Guide to the Galaxy, the answer to the ultimate question of life, the universe and everything is 42. The joke serves as a satire on the obsession with finding simple answers to the most complex questions.

However, genuine concern is now emerging over the use of simplistic metrics to cover environmental risks and how this could lead to errors in asset allocation, confusion among investors and an ineffective regulatory reporting regime.

In a Funds Europe webinar on the challenges of ESG reporting, Invesco fund manager Clive Emery spoke about the dangers of an over-reliance on modelled ESG metrics, such as Climate Value at Risk (CVaR) or implied temperature rise (ITR), that attempt to distil climate change risk into a single number.

These concerns come at a time when various regulatory reporting initiatives, such as the EU’s Sustainable Finance Disclosure Regime (SFDR) and the UK’s Sustainability Disclosure Requirements (SDR) are in their formative stages. The UK’s Financial Conduct Authority, for example, has been criticised in some quarters for proposing that implied temperature rise forms a central part of a firm’s climate risk disclosure.

“There are some very simple measures being created that optically, and on a marketer’s framework, look fantastic (such as CVaR),” said Emery.

The problem, he says, is that these are based on very complex models that should not be entirely trusted. “The funds industry has only just learned how to forecast quarterly earnings, let alone reduction of carbon emissions over a 30-year time horizon.”

Emery referred to the “tyranny” of these metrics that could see asset managers making investment decisions to satisfy the model rather than the market. “The unintended consequence of these simplistic metrics will be a terrible allocation of capital that is based on one model’s views. I’ve seen certain jurisdictions look to use climate metric as the key way to determine between funds. That would be catastrophic,” he said.

“That is the issue you have with a disclosure regime that defines sustainability, rather than letting the market determine sustainability,” said Emery.

Instead, he would prefer to see a fund manager determine its own non-performance-related criteria and then use that as a benchmark that sets out the objective, methodology and outcome of its sustainable fund.

Emery is not alone. According to Archie Beeching, director of responsible investing at fund manager Muzinich & Co, it is not at all helpful to “boil everything down to a handful of metrics” to capture a multitude of different concepts relating to ESG.

“I appreciate that to be able to report to investors and evidence our commitment on ESG or climate action, we need to show certain metrics and targets to clients, but they rarely tell the whole story,” says Beeching.

“The environment, let alone ‘ESG’, is so multidimensional with complex interrelationships between climate, water and nature. And while that’s not an excuse not to consider and act to minimise risks to the environment, there’s no way boiled-down metrics can capture that.”

Beeching does support the idea of reporting a standardised set of common metrics under the SFDR as well as other frameworks like the Task Force on Climate-Related Financial Disclosures (TCFD) and the science-based Targets Initiative, while recognising that they have imperfections.

The real danger though is that ESG metrics are taken out of context, gamed and misreported, says Beeching, invoking the phrase ‘lies, damn lies and statistics’. “ESG data should be treated very carefully and is no substitute for investment teams having a detailed understanding of the companies they are investing in and the broader ESG challenges we face,” he says.

Such is the complexity of climate risk modelling that one fund manager told Funds Europe that they are in the process of hiring someone full-time to manage their climate risk models. “We wouldn’t be hiring if we didn’t think these models were useful, but there is a real danger that stamping a number on a portfolio gives a false sense of security,” they said.

“This is compounded when hundreds of data inputs are rolled up into a composite rating,” she says. “It is important for values-based investors to be clear about their objectives and careful about identifying robust data that will help them meet and measure them.”

Dai points to the example of emissions data where scope 1 and scope 2 data is broadly and consistently reported and can be useful for investors wishing to reduce the emissions exposure of a portfolio.

However, while scope 3 data may be useful for companies wanting to assess the impact of their own operations, it has limited value in assessing a portfolio. “We feel that scope 3 emissions are not currently reliably estimated or consistently reported across companies and should not be relied upon to form portfolios,” says Dai.

One defence of single-number metrics is that they are a helpful tool to communicate a daily baseline figure to senior management or to investors, says Jessica Ground, global head of ESG at Capital Group. But while she accepts that there is a need to improve communication with investors around climate risk, an over-reliance on the likes of CVaR is just too dangerous.

“A lot of the work that goes into these numbers is helpful in terms of how we make climate risk more understandable to investors, but we run the risk of giving a false sense of security,” says Ground. “It could lead investors to think that if their fund has a low ITR or CVaR, then they are insulated from climate change risk.”

The industry has been in this situation before in terms of having a perceived over-reliance on models and metrics. In the aftermath of the 2008 financial crisis, Value at Risk (VaR) was blamed for creating exactly such a false sense of security.

However, it is an ever-more complex issue with CVaR, says Ground, who likens it to trying to model the impact of digitalisation in the early 90s. “The risk models used prior to the financial crisis were based on historical data. The challenge we have with climate models is that we don’t have the past to rely on and we don’t have great data. The level of company disclosure for scope 1, 2 and 3 is still poor.”

However, she is more reticent about the standardisation of modelling. “If everybody is using the same model, it does create a concentration risk,” she says. It also risks minimising all the innovation that has gone into sustainability modelling.

“It is such a multi-faceted area that takes in so many subjective measures, such as the behaviour of governments and of consumers as well as changing weather patterns. Modelling and measuring this is one of the greatest challenges I’ve seen in my investment career,” says Ground.

Greater sense of confidence
So, how can climate-based metrics be used effectively? One helpful strategy for interpreting the models, says Ground, is to break down the various components in CVaR – physical risk, transition risk, growth opportunities, regulation risk – rather than put them all into a single number. And then use scenario-based models against these pillars.

Similarly, breaking down the short, medium and long-term risks can help develop a greater sense of confidence around the numbers and make the distinction between ‘known knowns’ and ‘known unknowns’.

Consistent calculation and reporting of company metrics are generally helpful for investors because it allows for meaningful comparisons of the same metrics across companies, says Dai. “We believe that progress can be made on this front,” she says.

But the benefits of consistency may come with costs, Dai adds. “The costs include personnel time and third-party services provided by attorneys, auditors and data vendors. These costs need to be carefully weighed against the benefits.”

What is also often overlooked is that the market is already pricing ESG risks and opportunities, says Dai. “While the actual future impact of global warming might differ from current expectations, we believe the best information available today about the likelihood and potential impact of climate change is incorporated into market prices,” she says.

“That does not mean that the market portfolio is immune from climate risks. If global warming, carbon taxes and other material developments differ from current expectations of investors, assets will be repriced: that’s how markets work.”