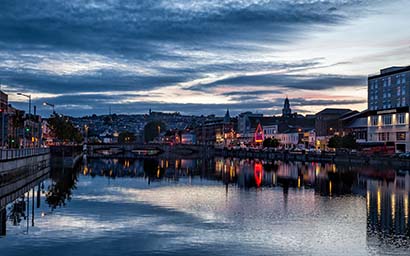 The Irish funds industry is a sector of national importance and has expanded well beyond the Dublin docklands where its story began. It now employs professionals living in every county in the Republic of Ireland. At the same time, every county apart from Dublin has seen employment growth in the sector since 2018.

To understand the birth of the industry, we need to go back to the launch of the International Financial Services Centre (IFSC) in 1987, under legislation devised by then prime minister Charles Haughey.

The move came in the wake of the Finance Act of 1986, which introduced financial incentives to encourage private sector investment in the urban renewal of Dublin’s docklands area. In 1987, this was updated to include a special 10% corporation tax rate for companies setting up in the IFSC. The IFSC tax incentive zone was thus established with EU approval.

Although the process of approving IFSC companies came to an end in December 2000, those that came into existence before the closing date benefited from the 10% rate until the end of 2005. Since then, all companies operating in the international financial services sector pay corporation tax at the prevailing rate of 12.5% – a rate that Ireland vigorously protects and sees as a defining advantage over other jurisdictions.

Moving ahead to 2022, the industry has continued to expand, growing well beyond the capital’s docklands. These days, nearly half of Irish-based funds have a presence outside of Dublin. Collectively, nearly 180 companies employ more than 17,000 people directly, living in every county. Throughout Ireland, the sector supports more than 34,000 jobs.

Since 2018, the growth seen outside of Dublin has been double that of the capital’s, and local communities benefit from €14.8 billion in economic output, according to Irish Funds’ ‘Indecon Economic Impact Assessment Report 2021’.

Recent figures have highlighted the funds industry’s contribution to regional development, with the number of employees based outside of Dublin rising by 40% in the past two years, says Irish Funds chief executive Pat Lardner.

Munster a big beneficiary
The southern province of Munster and its cities, Cork and Limerick, have benefited greatly. Among the reasons cited for companies to expand here are a pool of experienced talent, a pipeline of graduates with exposure to the funds industry, and lower operating costs than the capital’s.

As Cork Chamber of Commerce chief executive Conor Healy has said: “In the south-west, the financial services industry is supported by a strong talent pipeline of highly educated potential future employees from the two regional universities. UCC and Munster Technological University have a combined total of over 40,000 students and 2,000 graduates in business or finance disciplines each year.”

In the Cork area at present, 23 funds and asset management companies employ more than 1,400 people in total, making it Ireland’s second financial services centre after Dublin.

Cork has attracted BNY Mellon, HedgeServ, Citco, Ipes and Apex Fund Services. Other big players investing in the sector include AIG, Monex, Global Shares and Continuum, while Deutsche Borse Group, whose post-trade services arm Clearstream has gone from strength to strength in Cork, is hugely expanding its operations.

The Asset Management Exchange AMX chose Cork as its principal EU hub. According to Eoin Motherway, Ireland country head, “As an asset management firm based in the regions, we are an attractive proposition to finance professionals who don’t want to travel internationally, or indeed individuals that want to relocate home from global finance centres.”

JP Morgan has acquired Clonakilty-based fintech Global Shares in a deal worth $730 million (€665 million) – one of the largest exits by an Irish fintech.

And in February, specialist fund administrator Alter Domus officially opened new offices for its European Centre of Excellence in Cork, investing in a new 20,000 square foot (1,860m2) workspace. The company also announced the creation of 80 new jobs at its new premises, to be filled this year, in accounting, structured credit, fund management, depositary, compliance, technology and automation. It added that it was on schedule to fill the 100 positions announced in January this year.

From Cork, Alter Domus operates a European hub for global debt and capital markets, private equity, real estate and infrastructure investors and managers, supporting over €1.3 trillion in assets under administration globally. Including its Dublin office, Alter Domus has invested significantly in Ireland, increasing its headcount to more than 260.

Speaking at the official opening, finance minister Seán Fleming said the move was “a strong example of the role that alternative funds can play in developing high-quality jobs that have a real impact on our economy”.

James McEvoy, country executive Ireland at Alter Domus, said: “This year we completed our full service offering in Ireland with the launch of depositary and AIFM services alongside fund administration and corporate services. Ireland has massive growth potential in the alternatives space and we are delighted to be so well positioned in the market today to support this growth.”

In the Limerick area, 13 funds and asset management companies employ nearly 1,000 people. Northern Trust was one of the first companies to expand to the city, setting up its second Irish operation in 2007.

Best decision ever
Several hundred people also work here for FundRock, whose group head of business development, Paul Spendiff, says: “Setting up operations in Limerick was the best decision I ever made.”

Spendiff adds that he was thrilled with the calibre of staff available and amazed that senior leaders were able and willing to take up their posts there. Many have returned to the area and plan to stick around for good. “So many of our people have a field that they want to come back to and build a house in,” he says. 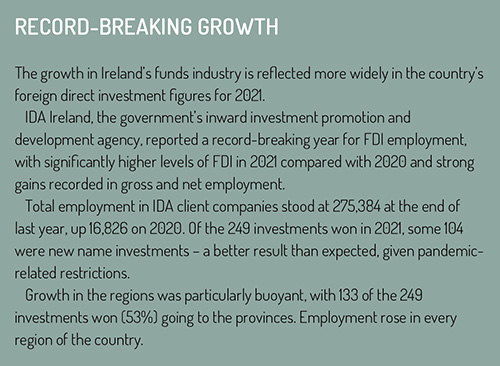 Certainly, there is no dearth of ambition in the region. The latest draft development plan from Cork City Council aims to create 31,000 jobs over the next seven years.

Ireland’s population is forecast to increase by 1 million by 2040, with Cork projected to receive about 100,000 people, more than doubling the number of residents in the space of 20 years. Next door, Limerick has the biggest single commercial property programme investment ever outside of Dublin.

Finance minister Fleming said: “The international financial services sector is now a national industry, and I am grateful to the funds industry for the role they have played in growing the sector outside of Dublin … and the growing impact it is having in the regions.”

Irish Funds’ Lardner says: “As we emerge from the pandemic, Irish Funds will continue to support investment and drive sustainable growth across the island.”

Indeed, the growth Lardner mentions shows no signs of abating. As part of Irish Funds’ research, Indecon asked firms for their growth projections with respect to business volumes in the five years to 2025.

In some ways, Covid-19 may ultimately benefit the regions. David Conway, CEO of property development company Limerick Twenty Thirty, recently said that at the start of the pandemic, people were returning from abroad, and that they are now returning from Dublin to Limerick. The Indecon economic report agrees, stating that firms in the sector have indicated “that significant percentages of their employees are likely to continue to work remotely”.

Since its inception, the funds industry in Ireland has grown every year bar one. Not surprisingly, the government’s forthcoming action plan under Ireland for Finance will look to build on those strong foundations – and for the regions, the future looks promising.