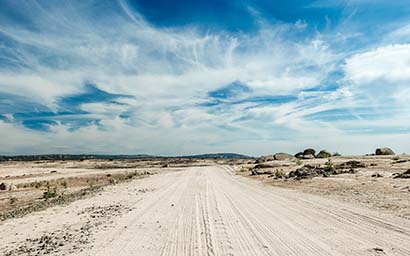 Amid heightened concerns about greenwashing, the funds industry’s stance on climate investing has come under increasing scrutiny. Pete Carvill looks at two studies in particular and asks how the landscape has changed since they were published.

It has taken some time, but few would doubt the dialogue around environmental, social and governance (ESG) investing has reached a new peak. That includes in the US, a country often seen as a laggard.

Recent research from Bloomberg Intelligence indicates that ESG assets are going to hit $41 trillion (€38.3 trillion) by the end of the year and up to $50 trillion by the end of 2025, with incoming growth led by the US after years of European dominance.

Climate change, governments, notions of social responsibility, and new thinking on risk management have driven ESG’s move from the margins of investment conversation.

Nick Samuels, head of fund manager research at investment consultants Redington, says that the landscape in 2022 is vastly different from where it was about half a decade ago.

“Three or four years before now,” he says, “most people were thinking about ESG across most asset classes, but every firm now has some sort of answer on ESG. We could not have said that three or four years ago.”

He adds: “ESG investing cuts through everything. We advise many clients on it, and we’re also seeing it with the pension schemes that are aligning themselves with TCFD [Task Force on Climate-Related Financial Disclosures]. They are being forced to think about environmental issues, particularly around the new stewardship regulations that they need to adhere to. So, pension schemes are being forced to think about this and, on the wealth side, they are finding that their clients are asking for more sustainable options.”

While there is a lot of talk around ESG nowadays and its role within a portfolio, that talk has not always been matched by action. Redington and the pressure group ShareAction publish separate reports each year – the ‘Responsible Investment Survey’ and ‘Voting Matters’ – that look at and analyse the investment actions and attitudes of large firms.

The findings of those reports over the years have shown weaknesses. In 2020, Redington said that 39% of respondents could not name an example of a climate-related engagement with a company. In the follow-up ‘Responsible Investment Survey 2021’, more than 38% of surveyed private equity asset managers deemed engagement to be irrelevant to their strategy.

In its most-recent ‘Voting Matters’, published last year, ShareAction said that the world’s largest asset managers were continuing to block efforts to make progress on environmental and social issues.

Compared to 2020, the authors behind ‘Voting Matters’ wrote: “Despite some asset managers demonstrating that it is possible to make a large year-on-year improvement, voting performance of the industry overall has remained stagnant, with a mere four percentage point increase in ‘for’ votes.” 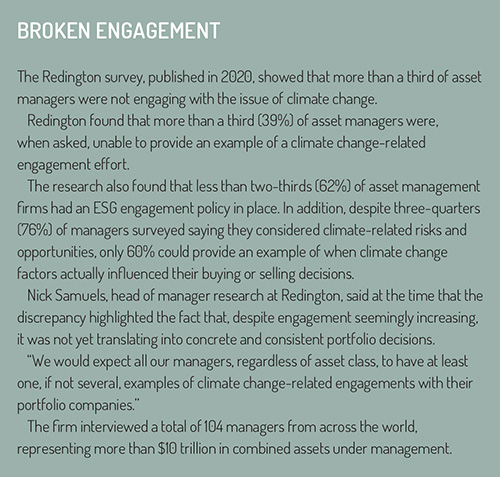 Go back to 2019, and the picture painted by that year’s ‘Voting Matters’ is of a sector in which Europe was leading, but the US was falling behind.

“These results,” wrote ShareAction in 2019, “are highly concerning as the 20 largest US fund managers control about 35% of global [assets under management], more than double the 14% run by the top 20 European players.”

Felix Nagrawala, a research manager at ShareAction who has worked on some of these reports, says US asset managers still lag their counterparts, three years after this fact was pointed out.

“A lot of it is to do with the cultural and regulatory environment. There’s a much stronger emphasis around ESG in Europe, particularly at the policy level with the EC’s sustainable finance agenda, as well as at the national level with things like the UK government’s stewardship code.

“On the flip side, it’s easier in the US for companies to file shareholder resolutions, even if these can be thrown out by the SEC [Securities and Exchange Commission] or challenged by the company itself.”

But as things have changed in recent years – with an increased regulatory push towards ESG investing, along with targets set by governments and regulators – there is a sense of a shift.

Nagrawala acknowledges this, saying that there have been signs of change.

“A lot of that, though,” he says, “has come more through asset managers waking up to the fact that there’s increasing societal and client pressure around ESG. The result of that is that more asset managers and institutions are keen to make high-level commitments like setting a net-zero target. That’s indicative of a positive thing.”

“Companies we like”
One of the firms that has taken a battering from ShareAction in recent years is Capital Group, one of America’s largest asset managers, with over $2 trillion. In 2019’s ‘Voting Matters’, it was named as the worst performer overall. 2020 saw it ranked third from bottom in the list, and 2021 saw it ranked 57th out of 65.

“We’ve known [ShareAction] for a long time,” he says, “They look at proxy voting, but that’s only the tip of the iceberg.

“The reasons you have for voting that way are harder to discern. There’s a couple of challenges in this around how we articulate how we’ve made some of these decisions. We would not, for example, have a large number of votes against management.”

Hardy says that Capital Group is more specific when it comes to the type of companies that it invests in, and he believes that is where the firm’s largest impact lies.

“We only invest in companies that we like,” he says. “I think, rightly or wrongly, that is a concentrated number for a firm our size out of the thousands of voting proposals.”

That said, Hardy does say that the landscape has shifted. “We’ve become more directional and holistic,” he says. “Even if the proposal is not perfectly formed, we are more inclined to support it if it’s headed in the right direction.” 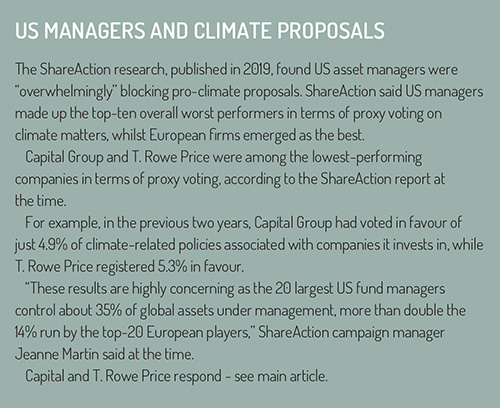 Capital Group was not the only firm to have received a low ranking by ShareAction. Also among these were T. Rowe Price, which was ranked second-worst in 2019, seventh from the bottom in 2020, and 55th out of 65 in 2021.

The firm could not supply a spokesperson for interview, but it did give Funds Europe a written statement.

T. Rowe Price said that the firm is committed to responsible investing, working closely with many organisations and regulators. It said that it was actively seeking to orient capital flows towards more sustainable investments. It also said that it acknowledged the existence and impact of climate change.

“We want to help our clients meet their objectives, which are increasingly starting to include net-zero targets. Accordingly, we are actively evaluating our product range and which of our products could meet our clients’ objectives and are looking at opportunities to bring more net-zero aligned products to market.”

The realpolitik of investing, though, is that there may be a conflict between a firm’s commitment to doing what is perceived as the right thing, alongside its fiduciary duty.

Conflict resolution
“There is a potential conflict there,” says Samuels at Redington. “But what we’ve been doing is looking at asset classes where that conflict doesn’t exist. There are a lot of opportunities when it comes to investing in the energy transition. Renewable infrastructure, for example, is popular and we’ve allocated a lot there in recent years. We’re now seeing more and more investment going into transition and efficiency.”

Hardy takes a similar tack, albeit from a different angle.

“It absolutely should not be seen as a conflict,” he says. “It is perceived that way sometimes, but I think in terms of making money, long-term returns are negatively impacted by climate change through things such as environmental catastrophes because these risks are systemic.”

All this brings us to 2022, and the question of whether this will be the year that sustainable investing gains further momentum.

Arguably, this area of fund management is in a Wild West phase, where regulation and standardisation are still works in progress. Aspects such as greenwashing, says Nagrawala, remain a very big issue since the industry is stalling on taking what he calls “tangible action”.

Hardy admits that the issues raised by this industry are complex, hard, and balanced. You need, he says, to throw resources at it in order to understand.

He adds: “The amount of engagement on these issues has doubled. We are seeing more interest now from clients and stakeholders. It’s entirely circular. We are all consumers, investors, and savers, and we are all thinking more about these issues. It’s a natural progression.”