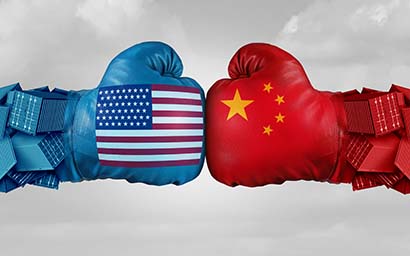 Could a trade war end ten years of strong performance for US equities? Perhaps not, finds Fiona Rintoul – but a recession may be on the cards anyway.

“No one wins in a trade war” – it’s an oft-repeated mantra, as the world’s two largest economies, China and the US, square up to one other over import tariffs. But is a trade war really on the cards – and if so, what will it do to US equities?

For now, the consensus is that a full-blown trade war – which the Economist Intelligence Unit (EIU) defines as “one where there is an exchange of tariff or non-tariff barriers that causes significant economic pain to both sides” – will be averted. Both sides have too much to lose in an integrated global economy, or so the argument for common sense goes.

Raphaël Pitoun, chief investment officer at Seilern Investment Management, notes that import tariffs imposed by the US could end up hurting US companies rather than making America great again. He cites the example of lift manufacturer Otis. It is basically an assembler, he says, with thousands of different suppliers. Some of them could be affected by import tariffs, pushing up Otis’s costs.

“Protectionism is complex,” says Pitoun. “On the cost side, it puts companies in a difficult position.”

With a tweet-happy president in the White House, it’s also important to dig behind the crowd-pleasing bluster. Daniel Morris, senior investment strategist at BNP Paribas Asset Management, notes that there is a genuine imbalance in import tariffs, with barriers for imports into China being much higher than those for imports into the US and Europe. This was appropriate when China was a developing economy, but may no longer be so.

“It’s not inconceivable that we will end up with lower trade barriers,” Morris says. “There’s a knee-jerk reaction that anything Trump does is wrong. People’s perception is coloured by political judgement.”

Morris also notes that while it’s in everyone’s interests to keep trade flowing, trade is “several times more important” to China than it is to the US. If there were to be a trade war, “we both lose, but they lose more”, he says.

Unintended consequences
Just the same, one may legitimately question the sagacity of President Trump’s all-guns-blazing approach to achieving the goal of rebalancing import tariffs, even if it is an intrinsically sensible goal. The rhetoric around the issue generates a febrile atmosphere that disturbs investors, and it’s easy to see how the situation could spin out of control.

“The risk of further escalation seems high,” says Mustafa Sagun, chief investment officer for global equities at Principal Global Investors. “Commodity price movements have been swift in response, particularly among agricultural products that are prominent among US exports to China.”

Sagun also sees a danger of unintended consequences from the current tit for tat between the US and China, in which the US always plays first, and we rely on China to respond proportionately.

“The primary stated aim of the US stance is to rein in intellectual property abuse by China, yet threat of tariffs on manufactured goods seems to be a rather indirect and likely ineffective mechanism to address those concerns,” he says. “Indeed, one unintended consequence of tariffs would likely be inflationary to US consumers at the margin, which is counter-productive.”

Nonetheless, now that we are more than one year into the controversial Trump presidency, and with the mid-term elections looming in November, there is a feeling abroad that investors are getting used to the situation. Certainly, market reactions to presidential tweets and other interventions are not as panicky as they once were.

“The market has become desensitised in certain circumstances,” says Jeff Morris, head of North American equities at Aberdeen Standard Investments. “The reaction was much sharper early on when the president put out detrimental tweets. Recently, the market has been delving more into the substance behind it.”

This may be partly because the president has been so unsuccessful in getting his programme through. But it’s also because the beat goes on, and investors must assess this slightly extraordinary situation just as they would any other.

“Market participants are not purely rational,” says Nadia Grant, head of US equities at Columbia Threadneedle Investments. “They are subject to fear and greed and not paying attention. We have to decide if the market has over- or underreacted.”

As the spat over import tariffs is currently confined to the US and China and affects only a tiny part of exports, Grant considers that the market may have overreacted. Assuming China continues to retaliate in a proportionate way, the impact on GDP could be less than 10 basis points, but the market has already sold off 10%.

“Fundamentals should now prevail as the report season starts coming in,” says Grant.

When it comes to fundamentals, the picture looks pretty good for US equities. “Make no mistake, the biggest driver of strong equity performance has been strong corporate earnings performance,” says Sagun. “Nothing is more fundamental.”

Sagun believes many investors have begun to recognise earnings as the key driver of stock performance, a shift that he welcomes.

“Speculating on politics, commodity prices and other macro variables is generally a formula for disappointment, if not disaster,” he says. “The implosion of leveraged VIX exchange-traded funds in February was a good reminder.” The Vix is a well known volatility indicator. In this context, President Trump’s tax reform – pretty much the only part of his programme he has managed to implement – may be viewed as helpful. It “partially translates into a tailwind for corporate earnings”, says Sagun, and is broadly welcomed by market participants.

However, it could be argued that it isn’t needed at this point.

“It’s pretty late in the cycle,” says Grant. “It may have magnified or shortened the cycle.”

Too good to last?
This raises the spectre of a downturn further on. Although the US economy seems to be bumping along quite happily at the moment – and everyone is in agreement that the Federal Reserve is doing the right thing by gradually raising interest rates – there is a feeling among investors that this benign scenario perhaps can’t last.

After ten years of strong performance from the US equity market, it’s partly a question of natural economic cycles.

“If we assume the business cycle still exists, the US will go into recession regardless of who is president,” says Daniel Morris. “You could argue President Trump’s policies have brought the date of the recession closer.”

Other investors are concerned by a certain weirdness in the way key indicators are behaving at the moment, as the Fed raises interest rates in the face of a strengthening economy and job market. After ten years of unconventional monetary policy, could it be that things no longer work quite as they used to?

“All the stars are aligned for inflation to go up, but inflation is not going up,” says Pitoun. “This should make us question our beliefs.”

This may help to explain the disjunct between how the Fed sees the future and how the markets see it. The Fed Fund Futures market has priced in three hikes for this year but has not bought the idea of further hikes in 2019-20, notes Daniel Morris.

“There is still significant scepticism in the market about what the Fed will be able to do,” he says. “We agree with the market that the Fed won’t be able to hike in 2019-20. There are structural factors to consider, such as demographics.”

And so, for investors in US equities, the overriding theme at the moment is unpredictability, despite a broadly benign – or benign-seeming – economic background. Whether it is because of presidential tweets, concerns about an escalating trade war or unusual behaviour by economic indicators, volatility is on the rise, which isn’t necessarily a bad thing.

All in all, it’s a stock-picker’s market, with correlations coming down materially in the past year. Within that, investors see particular opportunities in financials and in technology companies.

Looking for winners
Financials have benefited from the move from quantitative easing to quantitative tightening. Furthermore, valuations have a lot of room for contraction should the economic outlook worsen, says Jeff Morris.

Technology companies stand to capitalise on trends such as digitalisation and the Internet of Things. However, not every tech bet is a winner.

“We are selective, particularly among the big large-cap technology names,” says Jeff Morris.

Across the board, some fund managers believe that too many investors in the US market have become complacent about risk and overly exposed to the S&P 500 through index funds. In the current market, the solution may be to cast a wider net.