Eric Lonergan of M&G Investments looks at various theories about why Japan wants to raise the inflation rate. Which of them is the most likely?

One of prime minister Shinzo Abe’s “three arrows” announced after his 2012 election victory was monetary easing, with the Bank of Japan (BoJ) mandated to generate a 2% inflation rate after years of non-existent changes in the price level.

Why is the BoJ trying to raise the rate of inflation? Taking account of its demographic profile, Japan’s economic performance has been impressive by developed world standards. GDP per capita is in line with the UK and the eurozone.

The economic rationale for raising the inflation rate of an economy usually has three dimensions, the first two relatively conventional and the third less so:

• to reduce real interest rates to encourage higher consumption and investment spending,
• to erode real wages stuck at levels that are ‘too high’ for the labour market to clear, and
• to deal with “excess” leverage.

The arguments put forward by the BoJ tend to be inconsistent. In public, policymakers talk about fighting a “deflationary mindset” and a tendency to defer consumption in anticipation of lower prices. In private, Japanese policymakers seem to worry most about the stock of public-sector debt. 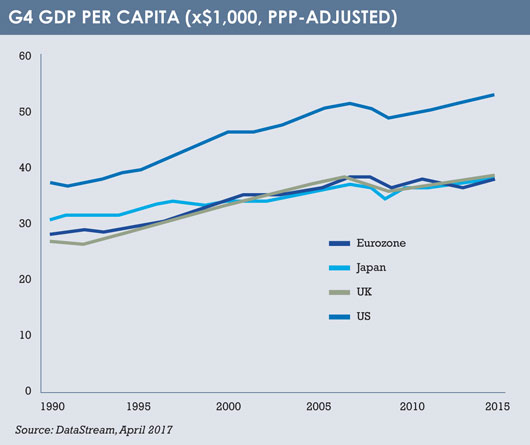 So what is really going on? The conventional cases for raising inflation can be dismissed. The BoJ is clearly not trying to reduce real wages to allow the labour market to clear, since the economy appears to be at full employment.

The idea that Japan needs a lower real interest rate structure to raise consumption and investment also looks irrelevant. First, the theory is weak, particularly given Japan’s demography and per-capita income. Second, if the economy is at full employment, there should be no need for stimulus.

Lower real interest rates should not be expected to raise demand. The equity risk premium and observed levels of demand influence corporate spending far more than real interest rates. When it comes to consumers, recent experience suggests that lower rates may have the opposite effect: because people approaching retirement target a particular amount of savings, they may actually save more if the rates on those savings are lower.

PUBLIC DEBT
This leaves the third argument; that inflation is required to deal with excessive debt levels. This seems to be the real motivation of many Japanese policymakers. No one worries about private-sector debt levels or asset prices in Japan at the moment. Instead, the collective policymaking obsession is with Japan’s public-sector debt.

However, there is an issue with this obsession. In a world of QE (or Japan’s so-called QQE, quantitative and qualitative easing), public-sector debt accounting is dreadfully misleading. The Bank of Japan is in the process of owning most of the outstanding government debt of Japan (it currently owns around 40%). BoJ holdings are part of the consolidated government balance sheet – its holdings are
in fact the accounting equivalent of a debt cancellation. If I buy back my own mortgage, I don’t have a mortgage.

So, why does anyone think Japan has a public-sector debt problem? Largely due to spurious accounting and confused analysis. Remember, the Bank of Japan buys government bonds by creating bank reserves. We don’t need to rehearse the arguments why bank reserves are not genuine liabilities of the Bank. Put simply, it’s obvious to most people that notes and coins are not ‘liabilities’ or debts of the state in any meaningful sense. Bank reserves are simply the electronic equivalent. 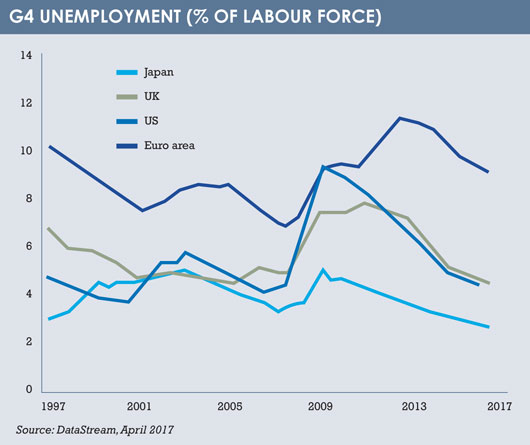 The crux of the issue with central banks’ balance sheets and reserve creation is what to do if there are too many reserves. What would indicate too many reserves? Either chronic lack of profitability in the banking sector or rapid, inflationary, credit growth. Neither is the case.

AN UNINTENDED BENFIT
So, is there any logic to what the BoJ is doing? There may be. Analysis of public-sector debt often ignores the fact that this debt is an asset to the private sector. And in the case of Japan the high gross debt in fact reveals a very high private-sector financial asset-to-GDP ratio. Moreover, the distribution of the ownership of financial assets in Japan is highly likely to be concentrated in a relatively small cohort of elderly rich people.

Why does this matter? Well, the BoJ may in fact have stumbled upon a solution to the ‘Piketty Problem’. Japan is likely to have high intra- and inter-generational inequality. If the BoJ does indeed succeed in sustaining, say, 1.5% inflation over 15 years, and the average yield on the stock of bonds held by the private sector is 20bps, the real value of those assets declines by 20%. The BoJ is redistributing wealth, and targeting – to borrow from Piketty* – a level of r that sits below g, at least for bonds.

* The ‘Piketty Problem’, as it is often described, is a thesis by the French economist Thomas Piketty focusing on wealth and income inequality in Europe and the United States since the 18th century. The central thesis is that when the rate of return on capital (r) is greater than the rate of economic growth (g) over the long term, the result is concentration of wealth, and this unequal distribution of wealth causes social and economic instability. Piketty proposes a global system of progressive wealth taxes to help reduce inequality and avoid the vast majority of wealth coming under the control of a tiny minority.