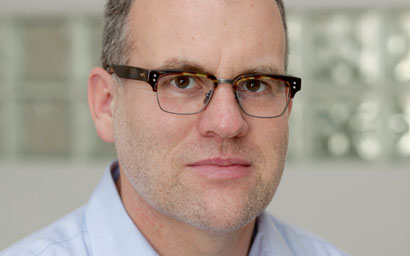 As an american investment firm’s first foray into the European exchange-traded fund (ETF) market, gold-mining ETFs might seem a strange choice. The consensus view, reflected in Funds Europe’s article in March, ‘Can gold regain its lustre?’, suggests that the precious metal’s glory days are over. The gold price has been falling and the mining sector has been hit. Merger talks between two of the largest gold miners, Barrick Gold and Newmont, fell through last year.

Gold miners have undergone restructuring after a period of cost-cutting and bankruptcies and are now in better shape to grow, he says. In this environment, there is the possibility for a bit of “spice” for the brave investor.

“That’s the beauty of having a gold-mining ETF, you get the M&A premium,” he says.

Back in the US, Van Eck Global – part of Van Eck Associates – has two identical ETFs listed on the New York Stock Exchange (NYSE). These are the firm’s “show ponies”, says Hamich, enjoying huge success. The US funds have $9 billion (€8.2 billion) between them and the GDX trades $1 billion every day. The GDXJ trades on average $400 million a day, although Hamich says this can double on occasion.

Van Eck Global listed its ETFs in London in April. In the US, Van Eck Global is an ETF provider and an active manager of other funds.

GLOBAL GROWTH
The April listings marked an expansion for the firm’s international business. When Hamich joined in 2008, the firm had no clients outside the US – now it has 300 in 80 countries.

Rewinding to Van Eck’s earlier days, its ETF offering was solely focused on the NYSE, concentrating liquidity on one exchange. “We couldn’t support multiple listings. I’d rather do one thing right than five things halfway,” explains Hamich.

One of the key drivers for Van Eck establishing a presence in Europe was regulatory.

“Some clients were forced to sell because their compliance and risk officers said it’s not a good idea to invest outside of Ucits,” says Hamich. Having decided that the firm needed a Ucits platform in order not to lose clients, it arranged Commerzbank as a market maker and decided to enter the European ETF arena.

But Van Eck is far from the first entrant, having to compete with other providers, of which iShares is the largest. 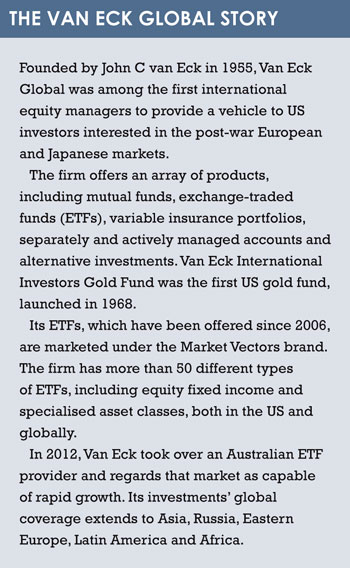 Hamich does not seem intimidated by iShares’ dominance. Of the $9 billion invested in Van Eck’s US funds, 40% is outside the US. If owners of 10% of these assets decided to change to Ucits, that would propel the funds to the top position, though this is not of primary concern to Hamich. “We don’t have to be number one – we’re not that arrogant. It’s tough if your biggest competitor is iShares,” he admits.

Another reason for an investor to buy the GDX or GDXJ is its US heritage. The amount both funds trade a day on NYSE provides ample liquidity.

“The liquidity providers will access US liquidity, whether it’s the ETF or the options on the ETF, and they will use the tight spreads in the US to provide very tight spreads in Europe. GDX trades at a 2 cents spread and GDXJ trades at a 4 cents spread on a $25 product. It’s tiny,” explains Hamich. The firm is the only one with the US listing and that may prove crucial in the success of the funds. The GDX was also the first ETF offering exposure to gold mining equities.

Another benefit for the juniors’ funds is that it has its own Market Vectors index. It tracks smaller companies and start-ups, but still have more than 30 names. Only liquid stocks are included in the index, which, when comparing to the other major index suppliers such as MSCI, Hamich sees as a major advantage.

FAMILY VENTURE
Hamich describes Van Eck as “niche” and “family run”. The global CEO is Jan van Eck. Being a smaller player in an ETF market dominated by the likes of Vanguard and BlackRock means that the company has to “be smart”. Hamich says that his firm was the first in Indonesia, Vietnam and Russia, hoping to gain from first-mover advantage.

He adds: “We can’t just copy. We were the first ones in the US. We can benefit with what we’ve done in the US [to benefit the European ETF].” He points out that his firm covers the entire ETF process. It has gold-mining experts who generate ideas; an index company, which it can use, or choose a third-party provider; and an ETF company to sell the product. “Only a few other companies offer this,” says Hamich.

He adds that in a perfect world, he would have chosen a fixed income product to bring over to the Ucits market, mainly for the tax savings. Investing in a US fixed income product would incur withholding taxes of up to 25%. Having said that, such a product is in the pipeline.

“We’re not here to maximise profits this year, or next year. We’re here for the long term,” he says. “You won’t see us disappearing tomorrow. Even if we don’t raise anything in six months or a year, we are in for the long term.”