BEYOND BRAZIL
Bradesco Asset Management has already sought to gain investors outside of its home market of Brazil, marketing its expertise as a manager of Latin American bonds and equities to institutions in Europe, the US and elsewhere.

Now, it is attempting to do the reverse: selling global equity expertise to domestic investors in the form of the Bradesco Global Fundo de Investimento Multimercado – IE fund, the firm’s first global equity product. The firm says it is the third largest player in Brazil with a market share of 12%. Given that Brazil is the sixth largest market for investment funds, with assets under management of more than $1 trillion, this gives it some size. Could now be an auspicious time to launch a global equity product? “We believe emerging markets offer new opportunities following the adjustment in prices on the back of the Fed tapering,” says Joaquim Levy, chief executive. 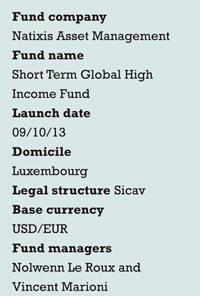 SHORT TERMISM
Several asset managers have launched funds in recent months that offer exposure to short term fixed income, gambling that a fear of rising interest rates will draw investors to these assets.

Natixis Asset Management is going down this route too, but with a fund that specifically targets short-term high-yield bonds.

The firm argues that the instruments are both relatively less sensitive to interest rate rises than long-term bonds and, as a bonus, will be in demand from insurance companies that are seeking to reduce their capital solvency requirements under Solvency II regulation.

The Natixis Short Term Global High Income Fund does not have a benchmark or sector allocation, which the firm says will allow it more flexibility to generate alpha returns. The fund managers will be supported by the firm’s 17-strong credit research team.

CHARITY MATTERS
Charities often have specific needs, such as a concern for responsible investment and a fear of risk, so it makes sense to have funds tailored to them.

The Newton Growth and Income Fund for Charities, a sub-fund of a UK umbrella unit trust run by BNY Mellon, which owns Newton Investment Management, aims for a yield of at least 3% a year by investing in equities and bonds.

“We are offering a total-return solution for charities that is designed to support their requirements for specific income from their investments,” says Alan Goodwin, head of charity and institutional account management at Newton.

Among the fund’s policies is a ban on direct investment in companies that gain more than 10% of their turnover from tobacco production. MAKE IT A BLEND
There are several sub-categories within emerging market debt: hard or local currency? Sovereign or corporate? Neuberger Berman’s new Emerging Market Debt Blend Fund is designed for those investors who would prefer their manager to make those choices for them.

A European version of an existing US fund, the fund is the 21st launched on Neuberger’s Ucits platform. It invests directly in the underlying securities rather than employ a fund of fund model.

“Many investors prefer to delegate the asset allocation decision within emerging market debt, and our investment team have the proven skills as well as the track record in this regard,” says Dik van Lomwel, head of Europe, Middle East and Africa and Latin America.

Investment decisions are informed by the firm’s 24-strong emerging market debt team, which are spread across a number of locations. 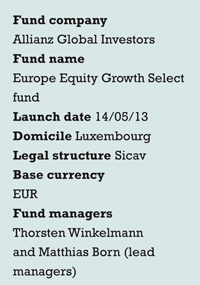 ONE YEAR ON...
When Allianz Global Investors launched its Europe Equity Growth Select fund in May 2013, lead manager Thorsten Winkelmann felt it necessary to concede that the macro picture in Europe was “still rather bleak”.

He argued that the fund, which takes a concentrated portfolio of between 30 and 45 stocks, could succeed despite the difficult conditions by expressing its managers’ structural growth ideas and investing only in the companies that have top-class corporate governance.

A year on, the macro picture in Europe is much rosier. At time of going to print, the Eurostoxx 50 index had risen more than 20% in the preceding 12 months. In this rising market, how have the structural ideas of Winkelmann and his co-manager Matthias Born fared? Since launch, the fund has returned 8.5% (as of April 30). Not bad, yet not stellar in comparison to the performance of the Eurostoxx 50 and other indices.