The German fund market has rebounded, but the drivers are institutions. Meanwhile, millions of retail investors are staying away, finds Stefanie Eschenbacher.

Assets under management in Germany have reached a record high last year, although the headline number masks variations between Spezialfonds and Publikumsfonds.

Statistics by the the Bundesverband Investment and Asset Management (BVI), the German funds association, recorded more than €2 trillion of assets under management.

Spezialfonds held €981.6 billion of assets at the end of last year. 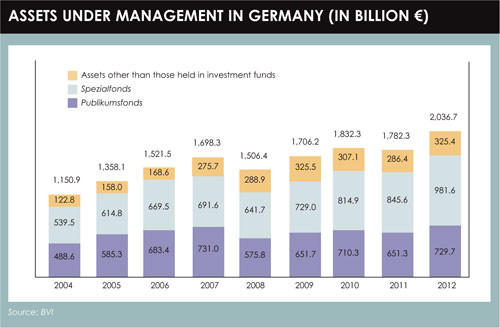 With the exception of 2008, assets held in Spezialfonds grew every year. Over the last decade, these funds have seen a growth rate of 105%.

Publikumsfonds, which are aimed at retail investors, have seen more volatile growth. Growth rates for Publikumsfonds dipped in 2007 and then again in 2011. Over the same time, these funds still saw a growth rate of 79%.

Detlef Glow, head of research for Europe, the Middle East and Africa at Lipper, says growth numbers are generally on a recovery trend.

“After the financial crisis there was a lot of insecurity and chaos in the market.”

Although assets under management reached a record high, those for Publikumsfonds are still not back to their pre-crisis levels of 2007.

Glow says when the industry body announces an all-time high one would expect that success to be spread across categories, but the breakdown of figures shows this was not the case. In Publikumsfonds a few millions are still missing to hit the all-time high, Glow says. “But they are still missing.”

He adds: “People lost trust and confidence in mutual funds.” 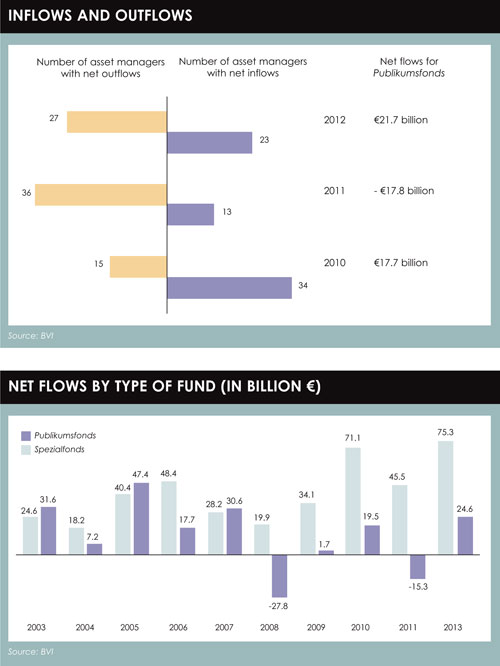 Direct investment in equities is still uncommon, he says. Germans usually prefer holding their savings in current accounts, which pay little interest, even if that means effectively losing money to inflation.

Nevertheless, the penetration of funds in Germany is high. Glow says most people do not know that they invest via their insurance or life insurance policies in funds.

“If you write insurance or protection on it, Germans will go after it,” he adds.

Lipper data shows there were 398 launches, 422 liquidations and 288 mergers – resulting in 252 fewer funds last year than in the previous year.

“In the old days, a bond fund with negative duration betting in interest rates going up would have been unthinkable,” he says.

Glow says asset managers in general have become more creative when it comes to emerging market investment, multi asset funds, specialist and single country funds. “Now there are even funds investing in Italian loans,” he adds.