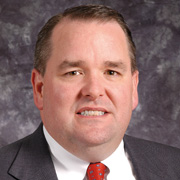 Jim Ross has been with State Street ever since it launched the first US-listed exchange-traded fund in 1993. He is now head of the company's $300-billion ETF business, SPDR. He talks to George Mitton.

There aren’t many people with as much experience of the shifting investor trends that can aid or impede the launch of new funds as Jim Ross, head of exchange-traded funds at State Street Global Advisors, who has been working with ETFs for nearly 20 years.

“You don’t want to try and time markets too much, most likely you’re going to get it wrong,” he laughs. “We’ve all done our share of mistakes. We opened and closed two internet funds in the early 1990s. I think one of the benchmarks was down 90%.”

He talks from a meeting room in State Street’s offices in Canary Wharf, overlooking a sunny spring morning in London’s Docklands. “You have your share of wins and losses,” he adds. “But we have not closed an ETF since 2005.”

Ross was with State Street Global Advisors when the company launched the first US-listed ETF in January 1993. Standard & Poor’s Depositary Receipts, later renamed the SPDR S&P 500 and often known by its stock ticker “SPY”, is now the biggest ETF in the world with more than $100 billion (€76 billion) in assets.

By all accounts the product’s growth has been remarkable. Ross says SPY is now the most liquid equity security in the world, a gratifying outcome he jokes was “probably not what we had planned”. The second-biggest ETF is another State Street product, the SPDR
Gold Trust, which has about $70 billion in assets and which, in Ross’s words, has “democratised” gold investing.

As a whole, the SPDR unit (pronounced “spider”) now manages about $300 billion and accounts for a quarter of State Street Global Advisors’ business.

But although State Street was the first US firm to launch an ETF, it is not the biggest ETF company.

That honour goes to Blackrock’s iShares brand which has more than twice the assets of the SPDR range with $670 billion, according to the latest Blackrock stats.

Ross is realistic about the rivalry. As much as he and his opposite numbers at Blackrock care about their brands, “to the end client, it’s really about the underlying assets”, he says. Ross does not spend much time thinking about how to dethrone his larger rival. Instead, State Street’s growth strategy is to increase the available pool of ETF investors through educating them about ETFs.

Cheap and convenient
For Ross, “it doesn’t have to be ETFs against the world”. ETFs can be used alongside conventional mutual funds to allow investors to diversify their portfolios or for tactical bets, he says. ETFs are “precise vehicles to get you to an asset allocation outcome”, with the advantage that they are comparatively cheap and convenient.

It certainly seems the ETF market is expanding. The number of exchange-traded products on the market has grown by roughly 30% a year for the past decade. With the exception of 2008, assets under management have grown steadily and now stand at more than $1.5 trillion.

There were obstacles to the growth of ETFs, though. One was the commission structure among US advisers that led them to prefer to recommend higher-cost mutual funds. Over time, competitive pressure shifted the US adviser model to a fee-based structure, which greatly helped ETF sales. Based on this experience, Ross expects the retail distribution review, which will ban commissions in the UK as of 2013, to be a step forward.

But despite their growth, ETFs still account for just a fraction of the total funds industry, less than 10% of the European industry, according to recent figures from data provider Lipper. Actively managed funds still dominate.

Ross says he foresees a time when the balance between ETFs and active funds is more equal, which would imply a great expansion in ETF assets to come. But he brushes off the idea that, because ETFs tend to have lower fees, this shift could mean an overall decline in income for investment companies.

“We don’t have 50 research analysts poring over stock reports from individual companies trying to figure out which one’s the right one,” he points out. In other words, ETF fees are lower because ETFs are cheaper to run; it does not mean profits for the provider are diminished.

However, not every ETF is profitable. Some analysts have suggested that a typical ETF needs to contain at least €50 million to be economically viable. This figure raises questions given that less than half the ETFs in Europe contain this much, according to Lipper (740 out of 1,243).

But Ross disputes the €50 million estimate, even as a ballpark figure, because it does not reflect that ETF revenues vary widely from product to product.

“Depending on what you’re charging, €50 million might be too high or, frankly, it could be way too low,” he says.

He accepts, though, that not every ETF brings in good profits, remarking that “when you have the two largest, you can sustain some smaller ones”. A provider might keep unprofitable ETFs on the market in the belief the funds will gather inflows in future, he says, or to maintain a complete product set.

Criticisms
Of course, such products may find their way on to the “ETF Deathwatch” list from data provider Morningstar, which monitors ETFs believed to be close to being withdrawn. But Ross says his team will do their best to prevent having to close products.

“Closing an ETF is not fun. When you go to work you want to work on something that’s really good, and if you’re having to a close a product, it’s not a good day.”

Another thing that can spoil an ETF provider’s day is having to deal with criticisms that are frequently aimed at the products. The biggest issue in recent years has been the use of derivatives, typically swaps, in synthetic products, and the counterparty risk this entails.

Ross is puzzled by the debate, mainly because securities lending programmes are the same for both ETFs and mutual funds, and have been operating for years in the US with little outcry. Such programmes can pass on extra returns to shareholders because of the revenue they generate.

In some conditions, this revenue can be valuable. Ross took the decision to continue SPDR’s lending programme during 2008, when he was under pressure to stop it. By lending securities that were in demand, the company’s financial sectors ETF returned 39 basis points in lending revenue during the year.

Ross admits the 2008 conditions were highly unusual, but says the example shows how lending can add value. He adds that SPDR’s indemnified programme offers a high level of protection. The firm takes collateral against securities it lends and in the unlikely event that this collateral cannot buy back the lent securities, State Street itself is committed to replenish the fund.

“One of the questions I have been asked is, why don’t we just stop? But I think that’s a knee-jerk reaction,” he says. “My view is we’re still doing what’s in the interest of the shareholder.”

He pauses. “And I think that’s what we’re charged with.”