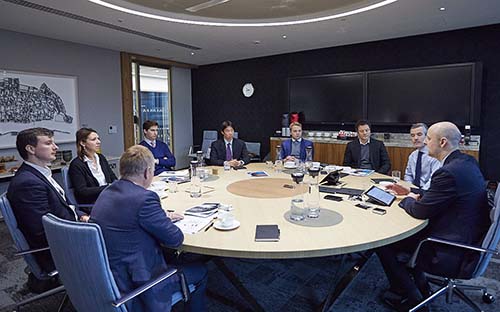 Japan is famously reforming its economy and corporate practices. Our panel of experts – including Allfunds, M&G Investments, Fidelity and Sparx group – argue this could end the cycle of disappointment with Japanese equities.

The eyes of the world will be on Japan in 2020 with the Olympics coming to Tokyo in July. The economy and stock market attract investor attention too – but a large degree of scepticism comes with this attention. Waves of enthusiasm are frequently dashed by disappointing returns.

There are many common beliefs and, perhaps, misconceptions about Japan’s economy and its equity market. To name a few:

Funds Europe and Camradata, in partnership with MRJ Investment Advisory, put together a panel of leading fund managers and fund selection specialists with in-depth knowledge of the Japanese market to discuss these points and more.

It should be noted this discussion took place before the full emergence of coronavirus and we publish it in the assumption that the underlying fundamentals highlighted here will remain valid during the longer term.

In the Asian region, these days China takes the lion’s share of the press. Its growth outlook, its opening up to foreign investors, and the concerns about debt and the US/ China trade wars that surround it – and not forgetting coronavirus – provide no shortage of journalistic copy. In this context, it’s easy to forget that Japan remains the third-largest global economy – and the third-largest stock market.

Investment Association figures for November last year show UK investors deployed £24.5 billion in Japanese all-cap and small-cap. This is a number not to be sniffed at. But who is allocating?

Oliver Wayne, lead equity researcher at institutional investment consultant Redington, says that it is typically only the largest corporate pension schemes and endowments that consider Japanese equities, with most taking exposure through broader global equity mandates.

The intermediated wealth channel differs somewhat. Demand there for risk assets remains strong. Jamie Frere-Scott, head of research at RMCP, says dedicated Japanese equities exposure may account for up to 3%-5% of a balanced portfolio. This number resonated with other panel members.

The corporate governance J-curve
Since 2012, no Japanese fund research meeting passes without mention of Abenomics and its ‘three arrows’: monetary stimulus, fiscal expansion and structural reforms. Shinzo Abe put forward these ideas on his re-election in 2012 with the ambition of jolting Japan from its flatlining growth and targeting reflation of the economy.

With the first two arrows showing some positive signs of impact, our panel focused on the third and vital area of structural reforms, including corporate governance initiatives.

“In the eighties and nineties there was a debate raging about the nature of Japanese capitalism and the shift away from a model where capital was not really allocated but seemingly distributed by the main banks at the direction of the government, to a private market allocation of capital,” he says.

Vine notes that Japanese companies have done a decent job of getting their margins up – but capital allocation had been poor. This is a vital point.

“We thought this change in capital allocation might take five to seven years. It’s taken about 20!”

However, a theme that shone through in the panel discussion was that change is finally occurring. Referencing Abenomics, Vine adds: “If we take a step back and consider what’s been happening, in the last five to six years, it is an amazing government-led, multifaceted and coordinated attempt to cajole and push boardrooms to behave differently, and what we are seeing now is a J-curve lagged effect with these changes cascading.”

State-sponsored initiatives have included the Japan Stewardship Code, Corporate Governance Code and initiatives in M&A guidelines and Companies Acts. This is a full arsenal of directives pushing for change and the results could be exceptionally positive. Many companies sweating their assets harder to generate sales could see a closing of the gap between public and private market valuations. Indeed, improved ROE and ROA metrics may bring Japanese company valuations closer to global multiples with a further benefit being the return of cash to investors through uplifts in dividend payments and share buybacks.

Nicholas Price, portfolio manager for the Fidelity Japan Aggressive Fund and the Fidelity Japan Trust, added: “It is stark how far Japan has come already. We’ve already got to US payout ratios of 60%. So, progress is being made, but there’s a long way to go.”

Masa Takeda, portfolio manager of the Sparx Group Japan Focus All Cap Strategy – while similarly enthused on the outlook – nevertheless says: “Japanese companies are really changing in a big way, but the economy lacks growth. The problems of a declining population and ageing demographics is a significant structural overhang.”

Takeda noted how tough these headwinds are to remove. Despite signs of inflation emerging, Japanese citizens remain cautious about spending.

Fear of the activist
Nick Wood, head of investment fund research at Quilter Cheviot, has recently returned from a week’s research trip in Japan to see for himself if change is truly afoot. He witnessed governance improvements but questioned if the payout ratio charts that are frequently shown in asset manager presentations show a complete picture of improved capital allocation.

“Despite dividends and buybacks rising, so are cash levels,” says Wood. And Price agreed, commenting on how over-capitalised many Japanese companies remain.

Payout ratios would need to rise to 80%-plus, the panel heard. Either that or companies would need to become more aggressive in terms of M&A activity and domestic consolidation to really start impacting return on equity.

Wood says he had the opportunity to meet the Government Pension Investment Fund, the Japan Pension Fund Association and specialists who train boardroom members on governance matters. There are signs of movement, but he questioned if the real reason for change in boardrooms is a fear of activists.

M&G’s Vine echoed these sentiments but noted there is something of a sea-change. “In the mid-2000s when activists first arrived, the regulatory and cultural environment was unprepared, and some prominent investors got shut down as a result.

The heavily revised governance and stewardship codes have changed that, with Japanese domestic investors being seen to vote in favour of foreign activist proposals.”

What about ‘cross shareholdings’, which remain prevalent in Japan? It is commonplace to see Japanese companies owning each other’s stock and board directorships being passed around, resulting in groupthink and glacial change. Interestingly, Wood also notes examples of companies holding significant portions of their market-cap in the shares of their customers. This is unlikely to be a decision made on the grounds of efficient capital allocation.

Encouraging laggards to improve capital allocation can be approached in several ways, including the ‘carrot and stick’ approach.

The stick is the fear of the activist. Price noted that company engagement and rankings of engagement on governance relative to their peers can have the desired effect as boards that fall behind are shamed into action.

Redington’s Wayne raised management incentivisation. We can call it the ‘carrot’. Redington likes to see appropriate financial alignment with investors from both fund managers and company management and says that “if the incentives to raise shareholder returns are not there through stock compensation, [then] marginal improvements rather than a step change may follow”.

Vine mentioned a fourfold increase in companies using stock-based compensation, from around 400 companies to around 1,600 since 2013. They may not have the strength of their Western counterparts but, again, progress is being made.