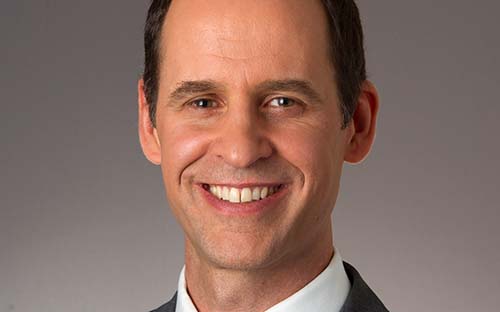 Eric Adler, chief executive of the second-largest global real estate asset manager, PGIM Real Estate, tells Mark Latham about an operational merger of its debt and equity divisions and the impact of Brexit.

It’s a measure of the increasingly global reach of PGIM Real Estate that its chief executive Eric Adler has opted to base himself out of the firm’s London office, rather than the group’s New Jersey headquarters.

Of the eight divisions that make up the PGIM group, Adler is the only one of the group’s chief executives to base himself outside the US.

Although the PGIM brand is less well known in Europe, the group’s numbers are impressive.

PGIM itself is the $1.3 trillion (€1.2 trillion) investment management business of the US insurance group Prudential Financial and has risen to become the seventh-largest manager of institutional assets globally.

The 51-year-old Arizona native, who has previously worked in England, France, Germany, Italy and the US, joined the firm in 2010 to run its European business and liked London so much, he decided to stay put when he was offered the top job in 2013.

“My initial thought when I was offered the job was that I would move to our headquarters in Madison, New Jersey – but first I thought I would try what it would be like to run things from London,” he recalls.

“If you are a truly global company, it is largely irrelevant where the head sits, so long as it is one of the main offices and has access to good transportation.

“There is no better city in the world than London from which to run a global business. Greenwich Mean Time is perfect, with very easy contact with the US in the afternoon and Asia in the morning.”

This resulted in him assuming the chairmanship of the group’s two real estate businesses in 2018.

The two divisions have already been operating as a single entity in Europe for more than a couple of years across such functions as business development, client relationships, research and risk analysis.

The new combined structure, with total assets under management of $179.2 billion, will be rolled out globally from April under the single PGIM Real Estate name and brand and with Adler as its chief executive.

“We have been increasingly working like one business and I chair both divisions to make sure there is continuity, but in Europe or Asia they are to all intents and purposes already completely merged,” he says.

2019 was a good year for the combined business, he adds, with more than $35 billion worth of business across 954 transactions worldwide.

There remain significant differences in the firm’s business from region to region, with Europe and Asia more concentrated on closed-ended strategies.

This contrasts with the US, where the firm is more focused on long-term debt and equity strategies.

“In effect, the business in Europe and Asia is much more like private equity applied to real estate,” says Adler.

“The idea is that people should think of us as a seamless provider of debt and equity solutions. As we get to know each other, we are finding more and more areas – such as downside risk mitigation – where it is important for both sides to know each other and that is giving opportunities for all our senior people to learn something they probably were not as focused on as before.

“So far I could not be more happy with how it has gone. I can point to a few billion dollars of new business development that was made possible by this alignment. Very concretely, we are already seeing direct results from what we have done.”

Just over half of the firm’s European debt is held in the UK: $2.8 billion compared with $5.3 billion in Europe as a whole.

But when it comes to equities, the UK accounts for a relatively small position of $2.8 billion of a European total of $12.1 billion.

“In recent years, London felt like it was getting to a point where we wanted to be net sellers, so we started selling much more than buying on the equities side – and then obviously Brexit compounded that.

“Since the country’s general election we view the UK as offering some real opportunities and have shifted to a buy mode.”

On the debt side, with many of the banks turning nervous following the Brexit referendum of 2016, this “created a real opportunity for non-bank lenders and so we found some of our best debt deals in the UK”.

Magnet
Despite Brexit, Adler believes, London will keep its world-class status as a magnet for real estate investment “no matter what”.

“While we still need to see the final deal that will be reached, we now have a lot more clarity on where things are going in the UK, which give us the basis on which to price equity, so I would expect us to be pretty aggressive buyers of real estate in the UK in the years to come.”

Brexit, says Adler, has had a positive impact on other financial centres in continental Europe but the impact on London itself has so far been muted.

“In a city the size of London, the departure of a few thousand people has not changed much and, so far, it has not been nearly as bad as we thought it might.

“On the other hand, when you have got 2,000 highly paid jobs going to much smaller cities such as Amsterdam, that totally shifts the market. Paris has also probably got a few thousand new jobs, but it is such a big market, it has not shifted the market.”

Adler adds that Frankfurt, in particular, has been booming. But the impact so far of Brexit has been less about firms moving staff from London and more the fact that Brexit has stimulated extra business activity for professional services companies, such as law firms.

While PGIM Real Estate moved a small number of people from London to Frankfurt some time ago, this was in response to a specific business opportunity in Europe and “not because of Brexit”.

Within continental Europe, most of PGIM Real Estate’s investment goes into France (mostly Paris, Lyons and recently Marseilles) and Germany – with the exception of Berlin, almost entirely in the former West Germany. “The former East Germany is still challenging,” he says.

Over the past decade, PGIM Real Estate has retreated from Central and Eastern Europe. “We need to be in the largest and most liquid markets and that exempts most of Eastern and Central Europe,” he says. “The only market we might go back to is Poland, but we don’t like pricing there now.”

Is the firm (which currently has 12 debt strategies and 20 equity strategies) planning to launch any new strategies?

“We are in 31 countries and have 35 offices and so have the ability to just add,” replies Adler. “We could have 100 products, but have decided to keep it to around 30. A lot of my job is keeping it focused.”