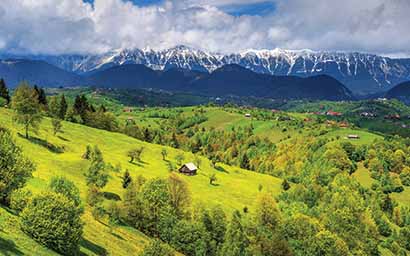 The region’s growth potential may not be as notable as emerging markets in Asia, but Fiona Rintoul asks if being overlooked, under-researched and undervalued make CEE markets attractive.

But do such endorsements – combined with European Union (EU) membership for a whole swathe of Central and Eastern European (CEE) markets – take some of the excitement out of investing in these markets?

It certainly feels like the CEE markets don’t get the breathless attention they did ten or 15 years ago. Have they perhaps been eclipsed by the great juggernaut economies of Asia and the resource-rich Latin American markets? And if so, is their position in the shade justified?

For Daniel Ganev, chief executive of Karoll Capital Management in Sofia, Bulgaria, the CEE markets have not so much been eclipsed or forgotten as never truly discovered. He cites research undertaken by his firm in cooperation with a Canadian partner into investment in CEE by Canadian institutional investors. Out of the top 100, only a couple had any exposure at all to CEE.

“The region is overlooked, under-researched and undervalued,” he says.

Part of the problem is that, Poland’s elevation by FTSE Russell notwithstanding, fund managers and their clients tend to view CEE through an emerging markets lens. Many global emerging markets funds stick quite closely to benchmark indices, and the CEE region is very small in those indices – less than 2% in the equity sector, according to Maarten-Jan Bakkum, senior markets strategist at NN Investment Partners.

“Global EM [emerging markets] managers might prefer to spend their time on the bigger markets in Asia or Latin America – or in general on markets with higher potential growth or higher interest rate levels,” he says.

Another issue is defining the CEE universe. Does it include continent-straddling Russia and Turkey? What about the Commonwealth of Independent States (CIS)? As an example, Karoll Capital Management’s Emerging Europe Opportunities strategy includes the core former ‘Ostbloc’ countries, plus others including Russia, Turkey, Austria and Greece.

Numbers to dream of
It is Karoll Capital Management’s mission to convince investors that they should be allocating more than 2% of what could already be quite a small ‘GEM’ – or global emerging markets - allocation to CEE markets. “Thirty years after the fall of the Berlin Wall, there still remain neglected opportunities,” says Ganev. “We want to give global investors access to these opportunities in our region.”

Certainly, the headline numbers in CEE markets look good. In the first half of 2018, GDP growth in the five core countries of Poland, the Czech Republic, Slovakia, Hungary and Romania was 4.2%, according to ‘CEE Investment Report 2018’. Unemployment was below 5% in all five countries – in most cases, well below – and so was inflation.

These are numbers Western European markets can only dream of and, in the report, Dan Bucsa, CEE chief economist at UniCredit, highlights four further strengths in the region. First, it is still cheaper and draws large foreign direct investment flows. Second, it is a major recipient of EU funds. Third, its labour force is much better quality than in other emerging markets. Fourth, it has moved up the global value chains to mid-range manufacturing.

Of course, there are issues in these markets too. A further shift to populism and conservatism after future elections could dampen prospects.

Then there are the rather different markets of Russia and Turkey. Both have lots of problems – with sanctions being perhaps the most obvious one in Russia – and lots of promise. In some ways, these two large markets are negatives of each other; Russia has relatively low GDP growth but is stable in terms of macro factors, whereas in Turkey it’s the opposite: an unstable economy and GDP growth of over 7%.

“I would argue that Russia could be the market to perform in 2019,” says Jacob Grapengiesser, head of Eastern Europe at East Capital. “I’m not saying it’s going to happen, but little by little, investors are starting to notice.” He points to relatively low valuations in Russia, with Sberbank, for example, trading at 4.6 times earnings. The problem is for the market to flourish, there needs to be lower volatility on global markets and less political noise. As it is, the universe in Russia has become narrower.

“The spreads between companies have increased,” says Grapengiesser. “In food retail, for example, you might have had five different companies growing at 20%-30%. You still have them, but two or three of them are really struggling.”

Some will look at these dynamics and wonder about the case for CEE. It’s a heterogenous region and investing there requires informed selectivity not just when it comes to stocks, but also markets.

“The CEE markets share common drivers, such as sensitivity to European demand growth and moves in the euro,” says Bakkum. “But at the same time, the countries have their own political and interest rate cycles. If investors want to allocate time to these markets, it can pay off to look at them individually.”

And while the CEE markets’ growth numbers generally look good when viewed from London or Frankfurt, they perhaps don’t sparkle quite so brilliantly for viewers in Beijing and Dehli.

“They are not so exciting from a growth perspective,” says Bakkum. “Long-term growth is relatively low due to demographics and the current level of development.”

At the same time, the biggest recent trend in non-European emerging markets such as China and India – the shift away from export-led growth to growth based on domestic consumption – is propelling the CEE markets too. Driven by higher disposable income, this creates a new kind of opportunity.

Essentially, it all comes down to human capital. Low labour and overall costs have attracted new companies to the region, but in CEE, a low-cost workforce doesn’t mean a low-quality workforce. Labour costs in CEE are around 50% cheaper than in developed Europe, but the workforce is equally if not better qualified. Right now, the region finds itself in that happy place where it is cheap but not too cheap.

“Labour costs are growing across the whole region, but we still have a competitive advantage,” says Nedelcheva.

There are perhaps some gaps, but they are being filled.

“Something that is not happening on a large scale yet is creation of technology, although we do see this in some places, for example car manufacturers have developed a few R&D centres in Romania, Hungary and the Czech Republic,” says Bucsa.

“So, we can hope that those will create spill-overs.”

For those who are convinced by the CEE proposition, there is a universe of 3,000 listed companies to choose from with a combined market capitalisation of €1 trillion. In Ganev’s view, they offer a unique combination of high growth and excellent dividend yield.

Furthermore, penetration is low, and the universe is growing. Poland has the largest stock market capitalisation to GDP ratio in the region at 55%, but this is well below normal developed market levels of over 100%. As financial literacy improves, more CEE companies are coming to understand the benefits of raising capital on the stock market, just as households begin to see stock market investment, perhaps through funds, as an alternative to bank deposits.

Local and international investors wishing to navigate this changing universe may find a way in through specialist regional managers, such as Karoll Capital Management, Trigon Asset Management in Estonia, Raiffeisen in Austria or Stockholm-based East Capital. They will of course argue that CEE markets are inefficient and therefore a gift to active managers and that local knowledge is essential for success. But there is something else too: these markets are difficult to access by other means.

“There are a couple of ETFs covering Russia, but if you want exposure to the region, you can’t do it really easily,” says Nedelcheva.

Karoll Capital Management is taking its CEE proposition to the UK, Germany, North America and Asia, and about half of its investors are international. In some ways, traction is easier to achieve in Asia, where, says Ganev, “they’ve been down this road”.

Investors considering these markets, but perhaps lured away by the prospect of even higher growth elsewhere, may also want to consider the diversification benefits they – or at least some of them – can provide in a GEM context.

“In the current environment, in which emerging markets are highly sensitive to the possible scenarios regarding the US-Chinese trade conflict, the CEE markets are relatively immune,” says Bakkum. “So, if one were to think that the US and China will not strike a deal, CEE would possibly be a good place to hide.”