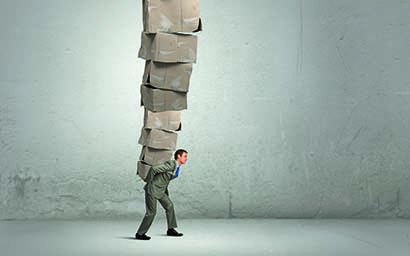 Industry players tell Catherine Lafferty that there are too few fund mergers in Europe to encourage efficiencies and lower costs.

Europe’s oversupply of funds is a well-known issue. The situation produces operational frictions for asset managers and is generally seen as one of the reasons fund costs for investors cannot always be reduced.

“The fact of the matter is there are too many funds out there,” says Jonathan Miller, director of manager research ratings at Morningstar. More than 30,000 Ucits funds are available to investors, he notes, many of which are “sub-scale, expensive and have paltry legacy assets sitting in them”.

He adds: “Fund groups should do the honourable thing and close these down. Especially when you consider the fact that around a third of these have £50 million (€56 million) or less in assets under management.”

Detlef Glow, head of Europe, Middle East and Africa research at Thomson Reuters Lipper, thinks the trend towards fewer fund mergers and liquidations may indicate that fund management firms in Europe are struggling to find redundant funds in their product ranges.

Even though the number of primary share classes has declined each year for the past five years, it does not mean that the variety of funds from which investors in European countries can choose has also declined. This is because Ucits funds can be sold across national borders within the EU, Glow says.

Mergers and liquidations might result from asset managers reducing their local product ranges and cross-listing international products that have been around for some years.

Natural inertia
According to Miller, the European distribution landscape, in which funds are offered through banks, is a key reason for the oversupply of ageing, unproductive funds. These legacy funds with tight distribution networks and tied assets tend to live on simply through natural inertia. This is in contrast to the UK, which has slightly different dynamics; accordingly, such funds are less prevalent.

Nonetheless, the European asset management industry is not without natural pressures for fund mergers and liquidations. Regulations, such as the recently introduced MiFID II with its product suitability tests, have forced asset managers to consider merging funds to reduce costs and manage onerous regulatory compliance.

A Funds Europe survey in partnership with Caceis found cost pressure due to regulation was the factor most likely to drive consolidation between asset management firms (see figure 2); and, of course, merging companies creates incentives to merge funds in order that duplication and competition between products can be avoided, and efficiencies gained.
The strong pressure on fund management companies to lower their fees presents yet another incentive to merge funds.

Without mergers, some funds may simply be too small to be financially viable. Lipper’s Glow considers the asset threshold above which a fund is viable lies between €50 million and €75 million. Meanwhile, professional investors might not consider a fund with fewer than €100 million in assets under management because it may not be large enough to absorb their sometimes considerable investments.

Some funds seem like ideal candidates for a merger, but this doesn’t always happen, since fund managers’ clients may prefer an existing fund structure to a newer one. That is, a fund merger could lose them those clients.

A reduction in fund launch activity in recent years indicates that the European asset management industry is sensible about the problems posed by an oversupply of funds. According to Glow, this may indicate that it “has learned its lessons and does not issue funds for each and every trend in the market”.

But pushing back against the pressure to merge and liquidate could lead to an equal and opposite reaction. Brexit could reduce the number of fund mergers, as fund managers may need a European and a UK investment solution. 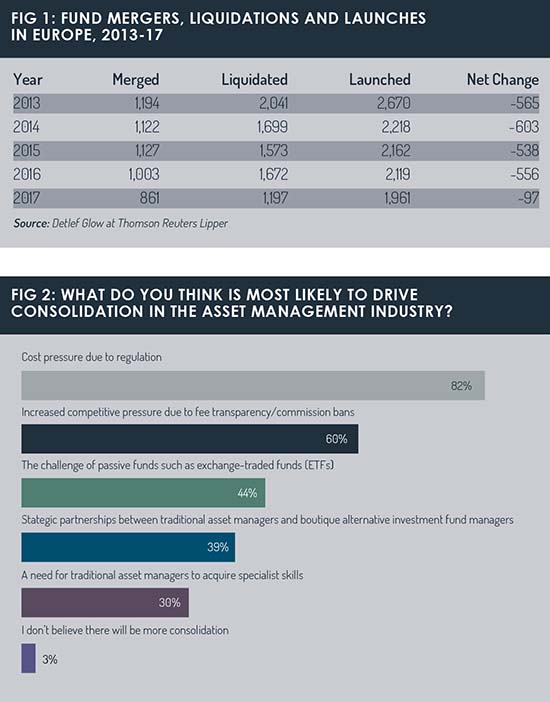 Stephen Doyle, head of relationship development, UK institutional at BNY Mellon, says: “Different regulatory regimes could be a problem with Brexit, definitely. That’s why fund managers are protecting themselves with contingency plans. Fund managers would prefer funds as single entities covering both jurisdictions. Brexit is leaving uncertainty for fund managers at the moment, which no one likes.”

Pros and cons
Merging funds brings advantages and disadvantages. Such mergers are useful if they help reduce costs to the fund manager, less so if it still leaves them short of reaching target markets.

Benefits for fund promoters include a reduction in the number of funds within a product range, meaning that managing and maintaining the range requires less effort and lower costs.

Merging funds may also release some economies of scale since the successor fund might be much bigger after the merger.

One of the positives for investors is that fund mergers and liquidations make product ranges less complex, as there are no longer several products with similar investment objectives available. This helps investors with fund selection.

There are minor disadvantages for fund promoters, principally regarding the legacy of the merged fund. Some investors might have bought the predecessor fund for a specific objective or portfolio manager. If one or both disappear, the investor might have no reason to stick around.

Whether fund mergers represent a benefit for customers is less clear. Gavin Weir, partner at law firm White & Case, says: “Arguably fund mergers are not good from the customer perspective as it leads to less choice, but it can be an advantage for funds, with synergies at every level.”

While pressure to lower fees may be an incentive to merge funds, fund mergers will not necessarily result in lower fees. Glow notes that if the fund that takes over has a lower fee structure, then the merger would result in lower overall costs, otherwise the overall fees might increase for the investor.

Fees are already coming down in active management, Morningstar’s Miller points out, adding that “closing sub-optimal funds means at least investors will be forced to review their investment choice, no doubt for the better”.

Pruning the European fund management garden may not be the most popular activity among fund managers, but it does bring about overall industry benefits. Perhaps it needs to be conducted in a more radical manner.

Miller says: “The overall picture is that while there are pockets of mergers or closures, there aren’t enough of them. There should be a bigger culling, either of legacy funds or smaller sub-optimal funds, where the ongoing charges are quite high.”