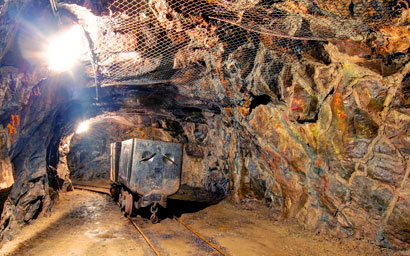 It was a measure of the squeeze facing the mining industry that organisers of the Mining Indaba conference, the industry’s largest convention, had to cut their ticket prices by as much as half this year.

But fears of an empty conference hall were unfounded. A surprise rally in several commodity prices, such as iron ore and coal, gave a much-needed boost to mining firms’ revenues. Organisers of the conference, held in Cape Town in February, say attendance rose compared with 2016.

Speakers at the event struck an optimistic note. Miners say they have emerged from a difficult period more efficient, leaner and ready to realise new gains. But should investors trust their money to this volatile sector?

DOWN MARKET
The past few years have been the worst of times for the mining industry. Commodity prices dived in 2014 and 2015 as Chinese economic growth appeared to fizzle out, revealing an oversupply of a range of materials. As their stock prices plummeted, mining firms rushed to cut their losses by closing mines and slashing spending on exploration.

But, broadly, they survived. Mark Cutifani, chief executive of Anglo American, was defiant as he addressed the conference. “Reports of mining’s death are greatly exaggerated,” he said.

He had every reason to be punchy. His company’s share price roughly quadrupled during 2016, albeit from a historically low base.

A similar tone came from Bold Baatar, chief executive of energy and minerals at Rio Tinto, a firm whose share price rose roughly 60% in 2016. “Despite volatility, last year turned out better than expected,” he said.

Optimists believe 2016 was just the beginning. Chinese infrastructure spending has revived, they say, with more demand to come as the country expands its “belt and road” initiative, a key aspect of which is to build power stations, ports and highways in central Asia and across the ‘maritime silk road’ in places like Sri Lanka and the Philippines.

Against this global backdrop, some asset managers are bullish on the mining sector. Thabo Khojane, managing director for Africa at Investec Asset Management, advocates a heavy overweight position in producers of natural resources, especially platinum and gold.

He is hopeful of a decline in industrial action in South Africa and says the industry’s difficult relationship with the ruling African National Congress (ANC) is likely to be reset within two years as the party undergoes a leadership transition.

That gap has begun to close, but he reckons it could take another seven years before prices are balanced. That would imply several more years of growth for mining firms’ share prices.

FINITE SUPPLY
Others are less sanguine about the mining sector. US president Donald Trump could throw debris in the mine shaft if he goes ahead with imposing a border adjustment tax of up to 20% on imported goods. The tax, “would have profound implications for commodity markets” says Robert Ryan, an analyst at BCA Research who spoke at Mining Indaba.

Ryan predicts Trump’s tax would contribute to a 15% rise in the trade-weighted value of the dollar. It would make commodities, which are priced in dollars, more expensive for non-US buyers while incentivising non-US producers to increase their output. The combined effect, of falling demand and rising supply, is a recipe for a tumbling price. “Those effects would make us bearish,” he says.

Other investors maintain a longstanding scepticism of the mining sector. Miners of certain metals – for example, gold – are in a continuous battle to extract a dwindling resource. They must dig deeper and deeper, at greater expense, to get it out of the ground. And although mining stocks go up and down in line with commodity cycles, in the long term, they have not rewarded investors, says Bernard Fick, chief executive of Prudential Investment Managers South Africa.

“Gold mining sector earnings in the past 20 years have gone sideways,” he says. “They made the same profits last year, in real terms, as they made 20 years
ago. These are assets that have proven over time not to deliver long term real earnings growth.

“We view them as value destructors. You’ve destroyed capital because you could have put the money in a retailer or a bank that’s earned money over time.”

SELLING OUT
It should perhaps concern commodity investors that some fund managers who participated in last year’s rally have sold their positions. Simon Raubenheimer of South African asset manager Allan Gray says his firm’s funds had exposure to mining companies but have reduced their holdings.

Much of the share price growth in the sector was driven by the iron ore price, which doubled to more than $80 a tonne during the year. Iron ore producers are “incredibly profitable” at this level, he says, but it won’t last.

Raubenheimer is not enthused by the more valuable metals either, concerned that miners of platinum and palladium, for instance, have not spent enough on capital expenditure in the past few years to maintain their operations. “Companies are under serious strain,” he says.

Platinum miner Lonmin, for instance, had to rely on South Africa’s quasi-public investment entity, the Public Investment Corporation, to help fund a rights issue at the end of 2015.

“The mines are getting deeper and deeper and they are becoming structurally more expensive,” he says. “You spend more on refrigeration, on getting your people there. It’s a constant pressure on cost inflation.”

ON STRIKE
It is likely the mining sector will remain a risky place to invest. A sector where stock prices halve and double in a year is not a place for the cautious, long-term investor who wants gradual, incremental gains.

Commodity prices themselves elude prediction. Raubenheimer admits to being “baffled” by the doubling of iron ore prices, which went against many economists’ predictions.

Meanwhile, African mines have a tendency to provoke industrial disputes and political deadlock. Many speakers at Mining Indaba sought to convince their audience that they were sharing the benefits of their operations with their workers and the population at large. It was a necessary public relations move for an industry
that employs thousands in tough, life-threatening labour and which has sparred with governments, which accuse it of extracting national resources and giving little back in return.

Yet investors should be reassured that mining will remain an integral part of the global economy – the only way to produce essential materials for smartphones, computer chips, jewellery and others. The industry, in some form, will persist. As the Anglo-American chief executive succinctly put it, “if it’s not grown, it’s mined”.