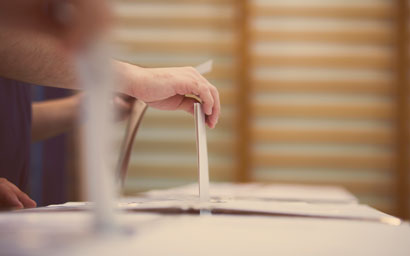 While they weigh up the chances of ECB tapering, investors in sovereign bonds are keeping a wary eye on French, Dutch, German and Italian elections. Lynn Strongin Dodds reports.

Volatility is likely to be a hallmark of the European sovereign debt market for the next year. Dutch, French and German elections dominate the first six months, while European Central Bank (ECB) actions will further complicate the picture for the rest of the year. Few fund managers are willing to predict outcomes and are adopting various positions. Some are taking cover under German bunds, while others are placing different bets on France and Italy.

“We think it could be a tale of two halves for the euro in 2017,” says Ryan Myerberg, a portfolio manager in Janus Capital’s fundamental fixed income group. “The most immediate focus is the elections and the tail risk associated with France’s presidential elections and a Marine Le Pen win; while later in the year we will be looking at the ECB and the tapering of quantitative easing as the economic backdrop continues
to improve.

“This will lead to the re-evaluation of European sovereign bonds, which has not happened in a very long time.”

The month of February was not kind to French bonds, although their fortunes revived slightly at the beginning of March due to the ebbing popularity of Le Pen, the far-right candidate. Investors seem to be taking comfort that centrist Emmanuel Macron is in second place with François Fillon, the former favourite for the job and right-wing candidate, who was recently placed under formal investigation over allegedly arranging fictitious jobs for his wife.

Currently, Macron and Fillon have around 20% of support in polls, behind Le Pen on 27-28%.  However, second-round polls indicate both Fillon and Macron would triumph against Le Pen and this triggered a rally in French government bonds. The yield gap against Germany fell to around 68 basis points, down from around 84 bps in mid-February – the widest spread since late 2012.

Despite the recovery, fund managers still tread carefully, as there is scepticism after pundits wrongly predicted the UK would vote to stay in the EU and Hillary Clinton would win the US presidency. Moreover, French bonds would be the most unsettled if the anti-EU Dutch Freedom Party, the PVV, becomes the largest party in the parliament, as some expect to happen in the Netherland’s March elections.

“France is definitely the elephant in the room,” says Cosimo Marasciulo, head of European fixed income at Pioneer Investments. “However, the political risk is priced in. Also, most commentators do not believe that even if Le Pen were to win the presidential election, that the National Front are likely to gain enough seats in June’s legislative elections to be able to push through a referendum on Eurozone membership.”

Marasciulo also notes that the French bond sell-off in mid-February was partly due to nervous non-domestic investors selling ahead of the elections. The main culprits were Japanese institutions that have traditionally been fans of French government bonds. They account for around 13% of all French Treasury bond holdings. Figures from the Bank of Japan show Japanese investors began to trim their holdings last November. This turned into a stampede in 2017 when Le Pen was gaining ground.

“What is interesting is that sovereign French bonds bore the brunt of the damage compared to credit and equities, which only slightly underperformed,” Marasciulo adds. He says current valuations of French government bonds are attractive. “We thought the reaction last year was probably overdone, but there are likely to be further periods of volatility in the next two months before the election.”

“What we saw was that the impact after the results were idiosyncratic and short-lived, and while the European government bond market will take some of the strain, volatility also creates opportunities.”

In terms of prospects, Gartside prefers Italy over France. He has no position in France, and adds: “Italian bonds are approaching 60 basis points over Spain and we think that the bond yields are one of the standouts. Although there is volatility due to the political situation, it is not exceptional or new.”

Some felt Italy was heading towards another election this year, but the April 30 date set for the ruling Democratic Party leadership contest rules that out. The contest pits Matteo Renzi, the former prime minister, against Andrea Orlando, the justice minister, and Michele Emiliano, the governor of Puglia.

Last December, Renzi was forced to quit as premier after a referendum on his constitutional reform campaign resulted in a crushing defeat. He handed the reins of power to his political ally Paolo Gentiloni, but the new elected head is expected to go against the Five Star Movement, Italy’s leading force for populism, which has promised to call for a referendum on euro membership.

MOVING TARGETS
Although this is creating uncertainty, given the general trend for populist governments, few people are worried that the Five Star Movement could wield enough power if it wins the general election in February 2018.

“I don’t think that they would be in a strong enough position to rule by themselves,” says Emma du Haney, senior product specialist at Insight Investment. “Our prediction is that there will be another weak coalition (excluding Five Star) and Italy will carry on as before with limited reforms. We recently held a small tactical overweight because contagion risk had pushed the spreads wider – to over 200 bp over Germany at one point.”

On the other hand, Mauro Valle, portfolio manager of the Generali Investments Sicav Euro Bond fund range, sees Italy and France as moving targets.  “The rate movements of French and Italian govies are linked to eurozone political risk, and they are currently showing a high level of correlation,” he says.

“As such, I am managing their exposure in the same direction: the strategy leans to go long French and Italian bonds when their spreads versus German Bunds are too wide, and to be more defensive when they perform better than the market.”

Valle is looking opportunistically in other areas of the peripheral space, particularly bonds with medium/short-term maturities to limit volatility and avoid negative yields, which have been exacerbated by the ECB’s Public Sector Purchase Programme.  The objective is to limit the volatility.

“In addition, I believe that over the next months, we will have positive inflation in the eurozone in a context of good economic growth,” he says. In such a scenario, Valle explains, expectations are for higher rates in the near future and, consequently, “longer maturities of the euro yield curve would
be penalised”.

ECB BOND PURCHASES
Although elections will be at the fore, fund managers are also bracing for the ECB to trim its €80 billion-a-month quantitative bond-buying programme to €60 billion a month from April. The programme itself is expected to continue for the rest of the year, unchanged by the recent 2% hike in inflation.

According to Arnab Das, head of macro research covering Europe and emerging markets in the fixed income unit of Invesco, there shouldn’t be a significant shift. He does believe, though, that a crucial issue for portfolio construction will be growth and inflation in Europe and the impact of policy – as much as political risk. While the cyclical recovery is expected to continue and headline inflation will be under upward pressure, there doesn’t seem much evidence of, or reason for, rapid follow-through in the core consumer price index, or for the ECB to accelerate tapering.

“Core inflation is under little, if any, upward pressure because the output gap, though shrinking, remains wide and will probably take another year or so to close – before which the base effects from rising commodity prices will fall out of the price level,” he says. “Therefore, this will restrict the durability of the increase in headline inflation, for the ECB’s multi-quarter HICP (harmonised European definition) mandate.”

Against this backdrop, Patrick Barbe, CIO core fixed income of the sovereign and aggregate management team at BNP Paribas Investment Partners, believes that the focus should be more on managing maturities than yield changes.

“This is a more technical way to look for positive returns and a slightly safer solution to manage volatility due to the political risk,” he says.

“For example, this would mean being underweight two to five-year government bonds but have an exposure to ten and 15 years.  This is because, while everything is expensive, it is less so on the longer maturity side.”

Olivier de Larouzière, head of interest rates at Natixis Asset Management, also looks at technical factors such as flows, investor behaviour, issuance and issuers as well as ECB purchases. In the current environment, these trends have translated into a slight underweight in France and tactical positions in Bunds.

“In Italy, we are neutral to five-year bonds but cautious on the long end, while in Spain we are overweight on long maturities, because we remain cautious on the volatility of spreads against Germany, particularly for France and Italy,” he says.