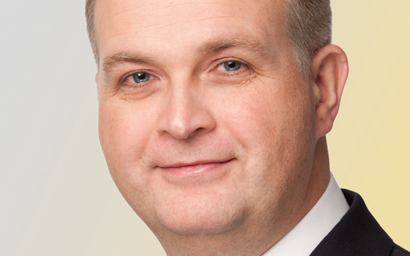 Aviva Investors’ annual results this month were the third set since Euan Munro took over as CEO. Nick Fitzpatrick speaks to him about the ‘Aims’ fund at the heart of the firm’s outcome strategy.

When Aviva plc, the UK life insurer, welcomed Euan Munro as chief executive of its asset management business three years ago, many observers thought his task would be to produce a Gars-like triumph.

Gars – the Global Absolute Return Strategy – had proved highly successful for Standard Life Investments, where Munro had been global head of multi-asset investing and fixed income before joining Aviva. He is jointly credited with Gars’ creation.

In July 2013, when his appointment was announced, he said he saw “a clear opportunity to unlock the potential” of the asset manager. Aviva Investors had been in the doldrums and was under the stewardship of an interim CEO following Alain Dromer’s departure in 2012.

To what extent, then, did this potential involve achieving Standard Life-style success levels in absolute return products?

“It was part of it,” Munro tells Funds Europe – though there was more to it than that. “At Standard Life Investments, we were pioneers of ‘outcome’ investing and I wanted to broaden on the outcome theme when I came here [to Aviva]. But I also wanted to move beyond Gars and build not just a leading fund, but a leading business.”

Progress towards that target was reflected in Aviva plc’s full-year results released earlier this month. The firm had £345 billion of assets under management, but just as important as this figure was data for the Aviva Investors Multi Strategy (Aims) fund range.

Aims’ flows were not split out in Aviva’s 2016 results, but Aims’ assets under management trebled to £9 billion (€10.4 billion).

The Aims strategy, which Aviva Investors launched under Munro’s leadership in July 2014, is widely seen as the firm’s answer to Gars. It forms Aviva Investors’ flagship fund range, with two Aims-branded funds, one target return and one target income, appearing in UK Oeic and international Sicav structures. There is also the Aims Fixed Income fund, a Sicav launched at the end of last year.

Aims is at the forefront of Munro’s outcomes strategy and there are four primary outcomes for clients, says Munro. These are target income, capital growth, liability matching, and returns that beat inflation.

“Fund management must deliver those outcomes and not keep trying to reinvent the same thing,” says Munro, who was Funds Europe’s European Personality of the Year in 2016.

But Gars is often talked about as much for its hedge fund-like complexity as for its success in raising money. Aims is not dissimilar, at least in top-level portfolio construction, according to analysis by Markov Processes International. Its complexity has obviously not deterred investors on a wide scale. But one fund selector who is wary is Mark Dampier, head of research at financial adviser Hargreaves Lansdown.

“I understand the concept, it’s not difficult,” says Dampier. “I’m not saying [Aims] is a bad fund, but for us it’s nearly impossible to analyse with our own quant system.” A key point for Dampier is the adviser’s ability to explain underperformance when, inevitably, it happens.

SYSTEMIC RISK
Asked about the complexity of funds like Aims and Gars that are at the forefront of outcome investing, and whether their complexity could even represent a systemic risk, Munro says: “When you look at what we did with Aims, it could be reasonable that if we became colossal, the fund could be a cause of correlation between markets – and that’s why capacity management is important.” Munro puts a capacity limit at £40 billion.

Aims’ assets under management of about £9 billon at the end of December 2016 compare to £25.14 billion for Gars at the end of January.

But he points out, as do many who defend asset management against suggestions of systemic risk, that asset managers are not like banks, they don’t take credit risk, and would not pass on systemic shocks even after a dramatic run on a firm’s funds – which, of course, is a topic Munro can talk about with some experience since the UK’s EU referendum vote.

PROPERTY ARBITRAGE
It was hardly a Lehman-scale financial shock, but when the UK’s June 23 referendum vote last year came out in favour of Brexit, the Aviva Investor Property Trust suspended dealing, as did a number of similar UK open-ended property funds managed by other asset managers. (The trust has since re-opened.)

The funds were subject to large withdrawals – partly, says Munro, because some knowledgeable investors saw a chance to make gains by arbitraging open-ended funds with real estate investment trusts (Reits), when Reit net asset values effectively discounted historic prices by about 16% after the result. “We didn’t know at the time, but we do now, that real property prices were actually only down by 2-3%,” he says.

Munro thinks Aviva had an obligation not to facilitate the arbitraging, even if he doesn’t blame those wealth managers who tried, and says some investors would have felt “very stupid” thinking prices were down 16% when the real figure was more like 2%.

FORTUNATE POSITION
The launch of Aims and the property fund dealing suspensions are two events that stand out in Munro’s three years as CEO.

Though Brexit might have hit its property fund, he doesn’t expect UK withdrawal from the EU to affect geographic expansion much. “We are in the fortunate position that we have all the right legal entities to be an important player in Europe,” he says in reference to UK and Luxembourg fund structures. “We also have quite substantial manufacturing in Europe.”

He highlights France and Canada as areas of business development. Aviva Canada announced the purchase of RBC General Insurance in January.

Working with other Aviva entities is an advantage, Munro says. “If you go back ten years, a lot of fund managers had a snobby approach to being associated with an insurance company, but Aviva is a conglomerate and having a distribution link with affiliated entities is going to be more and more important.”