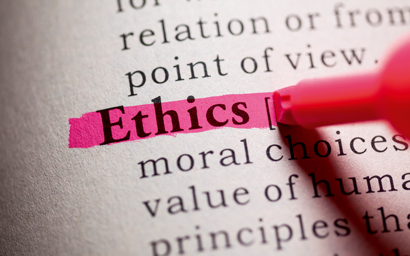 Ethics in the European fund management industry is, in some ways, a very straightforward affair. We can all agree that fund managers should act in the best interests of their clients, and there is no shortage of legislation to underline this basic point.

“EU legislation does not leave any room for ambiguity as to the way asset managers are expected to treat their clients in a fair and ethical manner,” says Peter De Proft, director general of the European Fund and Asset Management Association. “The general principle to always put our clients’ interests first can be found in AIFMD, Ucits IV and MiFID II – these three directives all establish requirements for investment firms to act honestly, fairly and professionally in accordance with the best interests of their clients.”

This is true. But is it enough? Many think not. There is a sense that the industry needs to do more to convince investors and the wider public that it can be trusted to act in their best interests – that it is, to put it in the bluntest moral terms, a force for good.

Paul Smith, president and chief executive of the CFA Institute, describes this sense – that more is needed from the industry in terms of ethical fibre – as an existential crisis. “If we cannot improve our conduct,” he says, “we will not thrive going forwards.”

Other voices, such as that of Saker Nusseibeh, chief executive of Hermes Investment Management, also make it clear that there is no room for shilly-shallying. “Increasing responsible capitalism and improving ethics in financial services is, in my view, one of the most urgent issues facing our industry,” he says.

True, with a couple of notable exceptions, mainly on the hedge fund side, the funds industry has not sunk into the morass of moral turpitude that engulfed the banking industry during the 2008 global financial crisis. Neither did fund managers’ reputations plummet in the public estimation as far as those of bankers. (It’s telling that, post-crisis, Virgin Money could encourage savers to join it because “all the rest are bankers”, confident of a knowing titter.)

But does the public love the funds industry? Not really. Does it trust the industry? Well…

FALLING SHORT
A recent survey from the CFA Institute showed that trust in the financial services industry among retail investors had risen from 50% in 2013 to 61% currently. The institute says the increase is due to rising trust in the US, UK and Australia and to higher absolute trust levels in markets not included in the 2013 study, notably China, India and Singapore.

But there is a fly in the ointment. Both retail and institutional investors believe that financial professionals fall short on the issues of fees, transparency and performance – and interestingly, they both rate transparency and ethical behaviour as more important than performance. Among retail investors, the most important attributes for an investment firm are that it “fully discloses fees and other costs” and “has reliable security measures”, while institutional investors put “acts in an ethical manner” first, followed by “fully discloses fees and other costs”.

In order to thrive, the funds industry needs to address these concerns, says the CFA Institute’s Smith. “We need greater transparency, less complex products and better fee arrangements,” he says. “We have to prove to the industry that this is not altruism but enlightened self-interest.”

Most managers of such products would run away screaming if you suggest to them that what they are doing is ethical or good, or any other scary word that goes in that moralising direction. “It makes financial sense,” they intone, wild-eyed with the profit motive.

Which is all very fine and dandy, especially as their investors expect what they do to make financial sense and bring them a good return. However, it does suggest that there is a bit of a problem in the industry with doing something because it is the right thing to do. Nonetheless, you could argue that is only by adopting a do-the-right-thing attitude that the funds industry can both engender the investor trust it so craves and play a full – and fulfilling – role in society.

“Can you regulate for ethical behaviour?’ asks Nick Bayley, managing director in Duff & Phelps’ compliance and regulatory consulting practice. “Has something got lost here?”

These are good questions and ones that Bayley – former head of department in the Financial Conduct Authority’s (FCA) markets policy and international division, and special adviser responsible for the UK regulator’s MiFID II policy project – is well placed to ask.

BAD BEHAVIOUR
Why do we need so much regulation? This is another question worth asking. Answer: because too many people in the financial services industry didn’t behave correctly in the past. In truth, however, you can regulate until you’re blue in the face, but you cannot (as Christian Strenger, director at DWS Investments and corporate governance guru, told this magazine last year in the context of the Volkswagen emissions scandal) “prescribe by law or by code that you have to be a good person”.

Now, to some extent, the regulators are pushing back and asking the financial services industry to put its own house in order. Through its senior managers’ regime, which will be rolled out to all firms including asset managers in 2018, the FCA, for example, is saying there is a limit to what the regulator can do, according to Bayley.

Under the revised regime, only the most senior people will be signed off by the FCA, and they will be accountable for what happens in their firm.

“The FCA is saying, ‘These are your people. You are accountable for their behaviour.’ It’s a way of pushing responsibility back on to the industry,” he says.

It then falls to the industry to rise to this challenge. How can it do that?

Some believe that swearing an oath may help. “Our industry has lost that sense of personal responsibility,” says Nusseibeh
at Hermes.

“Introducing an oath or pledge, as we have at Hermes, encourages staff of all levels and functions, including portfolio managers, to take ownership of the decisions they make and ultimately be responsible to their beneficiaries.”

It’s easy to dismiss such notions as window dressing. Pledges work only if people abide by them. The same is true of codes, such as the voluntary Asset Manager Code of Professional Conduct, offered by the CFA Institute “to help asset managers practice ethical principles that put client interests first”.

However, the act of pledging an oath or signing up to a code of conduct does serve to remind oath-takers of their responsibilities and can establish a context in which ethical behaviour becomes more likely.

“A lot of ethical mistakes are not made by fundamentally bad people,” says Colin McLean, managing director at SVM Asset Management. “They are made by good people under pressure.”

Ethics training that involves case studies can alert people to the potential dangers and help them to protect themselves from negative peer pressure. Likewise, training that encourages financial professionals to put themselves in their clients’ shoes can help to prevent abuses.

“It’s not enough to get clients to sign off on something if they can’t understand it,” says McLean.

The best way of ensuring that an asset management firm handles all its affairs as ethically as possible, he adds, is to have a conflicts committee, with independent members, that reviews all potential conflicts of interest. This approach was endorsed by the FSA, precursor of the FCA, in a 2012 study: “We found that the highest standards resulted from reviews performed by a governance committee or working group involving independent business staff, rather than by compliance staff in isolation.”

These are all steps in the right direction but the road to an ethically pure asset management industry with a clear social purpose that is loved by all may be long and hard. It many ways, it’s back to the future – to the service culture that existed in banking and other financial services in the post-war era.

At some time over the past 30 years, there was, suggests Duff & Phelps’ Bayley, “a cultural shift that will take a long time to reverse, despite all the focus being placed on changing culture by regulators globally”.

But it’s also forward to the future in the shape of a more diverse funds industry. “We need to have better hiring practices,” says Paul Smith. “If we demand change within the industry, we have to start hiring different types of people.”

The moment to act is now. The importance of investment management is rising due to the growth of shadow banking and personal pensions. With great importance comes great responsibility, and the regulator will not hesitate to punish those who stray from the straight and narrow.

As Saker Nusseibeh puts it: “Investment managers play a vital role in allocating vast sums of savers’ money and it is insulting to use their capital in a way that disadvantages them when they retire or does the same to their children.”