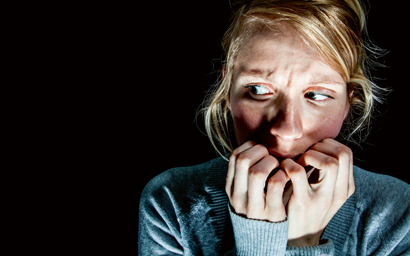 The ‘VIX trade’ could become relevant again if volatility continues to rise, and a particular Lyxor ETF would benefit. Nick Fitzpatrick looks at the ‘fear’ index and its investable offshoot, Enhanced Roll.

The VIX index is not the simplest thing in the world, admits Tim Edwards, an expert at S&P Dow Jones Indices (SPDJI).

Often referred to as the ‘fear’ index, the VIX uses a basket of option prices to measure the likely level of volatility in America’s largest companies. This in turn holds a mirror up to investor sentiment about stock prospects for the S&P 500 index.

With US companies making many sales abroad, the index is seen as a wider barometer of global market sentiment, too.

A higher VIX reading – such as the 80-point reading in November 2008, and the spike seen last year when the VIX jumped to 53 during August 24 – suggests volatility and investor uncertainty will increase. The index’s normal average range is between 15 and 20. 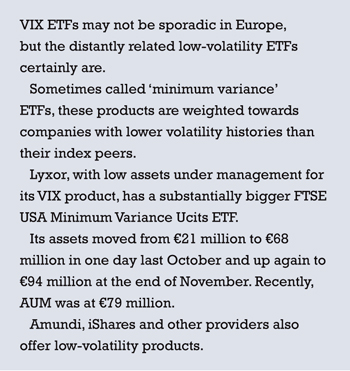 Although the index has been nowhere near the 80-point level this year, it has remained mainly above 20, the upper end of ‘normal’, even hitting a closing value of 28 at one point.

To that extent it has been a good year for what seems to be one of the few ETFs in Europe – virtually the only one – to trade VIX volatility. Lyxor’s year-to-date return for its euro-based Lyxor S&P 500 VIX Futures Enhanced Roll ETF was 16.82%, as of February 29.

Investors would have seen an even better return, of 27%, at January 21, both returns pointing to the recent uncertainty in markets. Yet longer term, volatility since 2012 has not paid off as a buy-and-hold investment. The ETF saw steep annual losses in recent years, led by lower ‘implied volatility’ that the VIX calculates.

Edwards, who is SPDJI’s senior director, index investment strategy, says: “2013, 2014, and the first half of 2015 were distinguished by remarkably low volatility. It was a stated goal of the Federal Reserve’s QE [quantitative easing] programme to dampen market volatility and they succeeded.”

The VIX’s upward direction since the middle of last year has sprung significantly, though not exclusively, from the oil price collapse.

“The S&P 500 is not an energy play but for the last few months, energy stocks have had an impact on the US market out of balance with their weighting and they have been driving sentiment.”

Rising default risk in the high-yield credit market did not help investor confidence. Energy companies make up a sizeable proportion of high-yield issuers and Fitch, a ratings agency, has predicted an increased default rate if oil stays below the $50 to $80-a-barrel range.

Edwards adds that higher implied volatility runs deeper than oil and ultimately leads to the “potential conclusion that we are in a new regime”. It’s not a financial crisis, he says, but there is more risk and uncertainty being felt across markets about where economies are heading.

China is a central feature in all this. Economic uncertainty there, which rocked markets last year and this year, would have given an impetus for tactical hedging using VIX-related products. Companies in the S&P 500 make about half of their revenues abroad, including in emerging markets.

“The elephant in the room is China… and it’s a long and complicated elephant. There is the risk of currency wars across the globe and, over the past five to six years, over half of economic growth has come from China alone,” says Edwards.

“There are also downstream concerns about China’s trading partners, which include the US. China is a now a systemic part of the global economy.”

SMALL ASSETS
Despite the positive returns that this created for the Lyxor ETF, its assets under management did not materially increase over recent volatile periods, despite the fruits of the volatility trade that were on offer or the ETF’s use as a hedge against volatility. 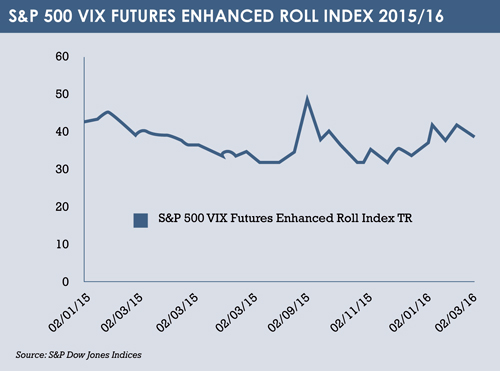 ETFs with hedging qualities are in competition with futures. A Greenwich Associates report published in January – commissioned by BlackRock and called ‘ETFs in the European Institutional Channel’ – found that just over 40% of 123 institutional investors planned to replace existing equity futures positions with ETFs.

The euro version of the Lyxor ETF, launched in September 2012, saw AUM rocket to nearly €50 million in February 2013 and stayed around this level until mid-2014, when AUM fell to €14.6 million, according to data from Lyxor’s website.

AUM recovered for a while afterwards but by April 2015 was below €20 million, and down to about €11 million in February this year. Its AUM appears to trend with the VIX but the low level of flows could suggest either that the low volatility of recent years deterred investors from the volatility trade – or perhaps that investors prefer other instruments to hedge turbulence. Lyxor did not respond to a request for comment.

Another European VIX ETF, the Source Nomura Voltage Mid-Term ETF, which tracked the Nomura Voltage Strategy Mid-Term index but had VIX exposure, was similar to Lyxor’s product and was withdrawn last year due to low AUM.

COMPLEXITY AND CONVEXITY
The index the Lyxor product references isn’t the VIX directly, but the S&P 500 VIX Futures Enhanced Roll Index. Whereas the three-year annualised return of the index was -29%, the year-to-date return recently was just over 8%.

Were the VIX, which is compiled by the Chicago Board Options Exchange, not complicated enough, then S&P’s related Enhanced Roll index is more so.

Edwards says: “The Enhanced Roll index is different from the VIX. When the S&P dropped around 9%, Enhanced Roll gained 53%. This is what you want from a hedge. It allows you to have a small allocation in order to get a big impact.

“That’s one reason why VIX-based products are somewhat attractive as hedges. There is the concept of convexity, when the market falls, volatility rises more than commensurately.”

Volatility in the coming months is predicted, by some, to increase. The higher VIX levels in January and February were just the start. This could make the volatility trade more appealing and volatility ETFs more attractive as hedges. Time will tell, but for now Edwards notes that more VIX-related products in the US are in fact short on volatility.