2008 marked a coming of age for trend following. Keith Balmer, at AHL, part of Man Investments, looks at what trend followers have achieved since then...

Governments scrambled to head off a global depression with multi-billion-dollar bailouts. Some of the largest financial names on the planet were brought to the edge of the abyss while others, such as Lehman Brothers, actually tumbled over.

There were few safe havens in 2008. Equities fell at the same time as credit spreads exploded. Few currencies looked solid in a world where central banks were forced to slash interest rates and governments had to print money to stave off depression. Energy and metals slumped as the global boom came to an abrupt end.

Yet throughout these turbulent times trend followers continued to make money. Managed futures funds – as trend followers are also known – gained 13.9% last year, according to the Barclay CTA Index, despite the fact that most major stock indices were down 40% or more.

Even before 2008 trend followers had successfully navigated market crises. Strong price trends tend to emerge from panics as markets dive during the worst times and then rally sharply as confidence returns. That is why when Russia defaulted in 1998 and the internet boom ended in 2000 trend followers also outperformed the market.

It was not just trend followers’ strong returns that caught investors’ eyes last year, however. What was really striking was that trend followers continued to perform when so many supposedly uncorrelated investment styles were in synchronised free fall.

What is more, trend followers, due to the liquid nature of the underlying futures and the fact that futures markets continued to function efficiently, remained liquid even in the midst of the crisis when many hedge fund managers, employing different strategies barred investors from redeeming their own money.

Directionally agnostic
Trend followers use complex computer models to scour the world looking for trends, dipping into hundreds of highly liquid futures and currency forward markets in dozens of countries. Historically, financial markets have exhibited persistent inefficiencies in the form of price trends. Trend following systems aim to identify the start of those trends, take long or short positions as they develop and exit those positions as the trends end. Trend followers are active in equities, bonds, currencies, interest rates, energy, metals and agriculturals.
Trend followers are directionally agnostic when it comes to markets. Their systematic trading styles are based on computer models that care nothing whether a market is moving up or down as long as it is trending. For example, trend followers made good money from long positions in 2008 when oil went up to US$147 (€162) a barrel in July then reversed their positions after the peak and continued to profit from short positions when oil slumped to less than $34
in December.

Trend followers’ ability to take long or short positions in so many markets means that they have delivered returns which are largely uncorrelated with stocks and bonds (as shown below). 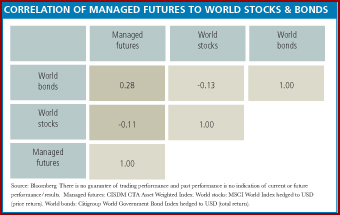 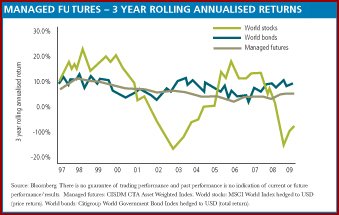 Late bloomer
Investors have been slow to catch on to trend following. Historically, trend followers have been labelled ‘black box’ systems and have been perceived as opaque and complex. In fact, while the underlying algorithms may be sophisticated, the investment proposition is simple; to follow trends and make money irrespective of whether markets are going up or down.

Of course, trend followers do not always make money. For example, in spite of the long equity rally, which has contributed to trend followers’ performance this year, they have struggled through the choppy, directionless markets in other sectors during 2009.

Trend followers normally bounce back very strongly from these kind of markets, however. Historically, trendless markets have eventually given way to strongly trending markets as macro-economic consensus reemerges and traders redeploy their risk capital. That appears to be what is happening now. Over the last two months trend followers have rallied as market views have started to firm and, amongst other things, the US dollar has started to trend steadily down, while gold and the Australian dollar have trended to the upside.

Despite the real and perceived negatives of managed futures, trend followers’ strong performance last year, their highly liquid strategies and clear diversification benefits have meant that trend-following managers are increasingly becoming accepted into the investment mainstream. Growing off a low base, assets under management in managed futures has risen steadily from around $5bn at the end of the 1980s to over $197bn at the second quarter of 2009, according to Barclay Trading Group.

Nor does the growth look likely to end there. A recent white paper published by RBC Capital Markets suggests a degree of ‘soul searching’ among pensions funds as they come to terms with the losses inflicted last year. More specifically, research from Bloomberg among the world’s top ten pension funds in August 2009, shows four cutting and five holding equity allocations, a shift which RBC suggests may spur renewed interest in hedge funds and alternatives.

Retail investors are also reappraising their investment options. Pensioners retiring at the end of this decade will probably look back on a decade of flat equity performance. The Dow Jones index, for example, has just hit the 10,000 mark for the third time in just over a decade. Against the backdrop of an ageing demographic and increasing life expectancy, this may well encourage retail investors to look beyond equities and bonds to bolster long-term performance.

Until now UK retail investors have struggled to access trend following funds in a tax-efficient way. Now, however, the advent of Ucits III funds offers retail investors trend-following funds in a liquid, highly regulated, EU approved format. Trend followers are well suited for Ucits wrappers because Ucits requires that investors’ money be redeemable in fourteen days or less and trend following futures funds, which trade in some of the most liquid markets in the world are easily able to offer that.

The never ending quest
Despite the powerful tailwinds behind trend followers, it is never an option for them to sit back and rely on their models. The most successful trend followers have delivered consistent double-digit returns for more than a decade. But they have only been able to achieve that through a consistent investment in research.

Trend followers believe that markets are inefficient (and they have the results to prove it). But most of them would add markets which tend to get more efficient over time. Therefore, trend followers are consistently testing, refining and reaffirming their current algorithms and searching for new opportunities through trading systems or markets to protect their ability to outperform and to trade in ever more efficient ways.